Does anybody install B-benders on banjos?

Iâve seen the Edge Onboard pitch changer for banjo but really donât want to put $600 into this. Any idea who could install a b-bender on my banjo? Iâd like to be able to raise the pitch while Iâm stilL playing with both hands so a lever or a pullie would work best. Anybody out there doing this kind of work?

Don't know much about these, but I heard about them, sounds cool!

I’ve seen the Edge Onboard pitch changer for banjo but really don’t want to put $600 into this. Any idea who could install a b-bender on my banjo?

Seeing as B-benders for Telecaster start at $1,000, I'd assume $600 for a banjo version would be the going rate.

Oh woops sorry i missed that part of your post! My mistake!

I know none of the mechanical details, but back in the fifties Allen Shelton fitted a steel guitar mechanism to the tailpiece on his RB-250. It was operated, I believe, with a pedal. You might research it.

Couldn't find a video of a BANJO application, but the GUITAR video says B to C#
I think I could manage that.

A pedal and a piece of bicycle brake cable would be my first two ingredients.

Might have to cobble together a whole different tailpiece. Sure hope not.

At the Flagstaff folk festival, a builder came in with no peghead, tuners in the rim and a gizmo string bender.

It looked like a trunkline for the 2nd string, run down through the body and a little weight on a trolly that moved back and forth.

Like steam punk that actually does something. Too cool. Isn't this available somewhere?

I must sound naive, I've never seen another one of these, must be common somewhere.

At the Flagstaff folk festival, a builder came in with no peghead, tuners in the rim and a gizmo string bender.

It looked like a trunkline for the 2nd string, run down through the body and a little weight on a trolly that moved back and forth.

Like steam punk that actually does something. Too cool. Isn't this available somewhere?

I must sound naive, I've never seen another one of these, must be common somewhere.

I know him, and was about to post about him here, but DAMMIT! I can't recall his name right now. He might rival Nechville for the title "Mad Scientist of the Banjo". I remember jamming with him at IBMA years ago, and he played that 10th fret "Ralph Stanley" lick using his bender instead of the normal choke. He also machines extra-heavy fingerpicks with very wide bands.

IRA, funny as heck to get YOU excited

If Mike Gregory could see it, he could do this, but adaptive sub geniuses work in unknown laboratories

Just now, I got out the banjo, tuned the first string DOWN to C#, and then pushed down on the 2nd string to see how much deflection it took to bring it up to the same note.
Imagining something with 3 "fingers", the outer two rigid, and the middle one pressing down when the pedal is stomped.

Alternatively, some kind of a cam and lever, which would work somewhat like a Bigsby vibrato tailpiece.

Either way, it might make he banjo too lumpy to fit back in the case.
Plan C would be to have the B string attached to something INSIDE the pot, so as not to change the exterior case requirements.

Still thinking about it.
Anybody have a video of the Edge Onboard ON a banjo?

Gordon Acri. In addition to benders, he is the inventor of the Acri fingerpick which are amazingly comfortable.

Bob Fults built the one Noam used for a while. Noam talks about it here.

Back in the mid 1960s Jimmy Cox had built such a rig for his own banjo, and showed it to my dad and me in detail. It worked off a small chain from the tailpiece to his belt loop. He would push the banjo out away from his waist to make it change string pitch.

Well, gee wizz!
If all those other people have already done this, have one of them show you what they've got, and save me the trouble of reinventing any of their designs.

I've got three ideas in mind, but they've got solid evidence that their stuff WORKS.

If not Us, Mike, then some youth will come along and do it

I love where these things come from.
Ideas, noggin, harmony and great music, harmless and hateless
Thanks to those who went ahead of us

Gordon Acri. In addition to benders, he is the inventor of the Acri fingerpick which are amazingly comfortable.

Yeah. Four hours or so after I posted on this thread, I finally remembered his name.

Before G Edward can come up with it first, I'm officially a w-bender.

Well, DANG!
The ability to post photos is currently upfucculated, so I must substitute perhaps a thousand words, in lieu of one drawing.

Works best on an open back banjo.

Extra-long B string is looped around a J hook nut near the HEEL, runs across to the tailpiece side, through a tiny pulley, up the side, over another pulley, to the bridge, and up the neck.

A clip is attached to the string, INSIDE the pot, and the other end of the clip fastens to the player's belt loop.
PUSHING the banjo DOWN increases tension on the string, raising the pitch.
Should cost very little to make, and can be removed and discarded without leaving any marks on the pre-War Mastertone or Squared Eel.

If a Telecaster has one of these devices, shouldn't it be called a "Fender Bender?"

A little history on the original concept:

What we call the B-bender or string bender was an idea for the electric guitar that Clarence White came up with and Gene Parsons put into realization. Gene is a machinist, and designed and assembled the first string bender, making some of the parts himself, and also using some pedal steel guitar parts donated by pedal steel guitarist Sneeky Pete Kleinow. Gene refined the design later, and still makes and installs the string benders, usually in Fender Telecaster guitars.

Clarence was Roland White's younger brother, and arguably one of the greatest guitarists of his generation. Gene is a multi-instrumentalist whose first instrument was the banjo. Both men became members of The Byrds during the later '60's and early 70's. The string bender can be heard on all of the later Byrds records, and in many other places.

There is currently a Martin D-18 with a Parsons-White string bender for sale at Lark Street Music. Since Gene could figure out how to make one work on a Martin flat-top, I suspect he would have no trouble adapting one to a banjo.

Gene Parson talks about the invention of the B-Bender.

I like the story about how Gene tossed the square of wood across the table that he had cut out of Clarence's guitar; and Clarence's reaction: "Oh my god, we're past the point of no return . . ."

Something as simple as THIS??? 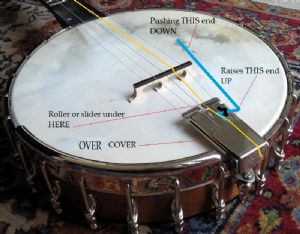 Clarence White's Telecaster with the Parsons-White B-Bender is now owned by Marty Stuart, who really knows how to use it.