Help identifying a plectrum from the 70s (possibly an import).

I've been trying to decide what manner of Jazz banjo to play, and currently caught up in the plectrum/tenor debate. My grandmother used to actually play plectrum, but looking at the photos, I couldn't identify what she played.

This photo was taken about 1975 or so in San Francisco (there was apparently a Dixieland craze there). I've never seen this headstock, and I've seen a lot of banjos. imgur.com/eUua8kD is a rehost of the image, just in case the ones I attached are too small.

I'm assuming it's an import because of the neck and the pot construction, but I've ruled out common brands like Harmony / Kay that were probably inexpensive during this period (I'm not sure she would've spent a lot of money on it). I also attached another photo of her band to see if someone might know anyone from them, because the plectrum world is pretty small.

Looks to be a John Grey. Here's a site with some photos of a similar one: worthpoint.com/worthopedia/vin...282051449

That appears to be a wider neck than is typical for a 4-string banjo. Could it have originally been a 6-string?

The "Gumby" headstock makes me think Supro. If you can do a high resolution scan of the photo and enlarge the banjo details, maybe we can ID.

But looking at the pics of the John Grey banjo provided in the link in Bruce's post, I think that is a solid lead.

Sorry, I can't help with the banjo. But your Grandmother is wearing the uniform of the Shakey's Pizza Parlor. The "Mustache Club/Pizza Parlor" fad was steeped in nostalgia but was something entirely new.

It ended pretty much before I was born, but it seemed like it was a lot of fun.

Having once been a Shakey's banjo player, I will respectfully disagree with Joel here. The outfit I wore was similar, but the hat had a lower crown and we wore striped shirts, not striped vests (mine never fit right).

It was a rather popular thing for a while, thougyh, and the look was imitated by others. I am also not certain the straw hat/striped shirt getup originated with Shakey's either. I've seen "HonkeyTonk Piano" LP's from the mid-1950's which featured piano players in the same sort of outfit.

Also, although sometimes it was fun, usually nobody was really listening, the patrons tended to be half drunk, and many of the requested numbers were the same old modern hit ballads. It got pretty boring when you had to play the same tune six or seven times a night. If you wanted to learn a chord progression on the fly, Shakey's was very helpful, though. I learned more in two weeks there than I did in a year playing on my own.

Thanks to everyone trying to figure this out. As far as I can tell the John Grey looks to be the likely culprit. If you look at the necks on their other banjos they're pretty hefty (made a on a guitar jig?).

My dad was pretty vehement about it not being a Shakey's Pizza outfit. She was kind of an odd bird, so I'm not sure.

I'm pretty sure this is a Shakey's. 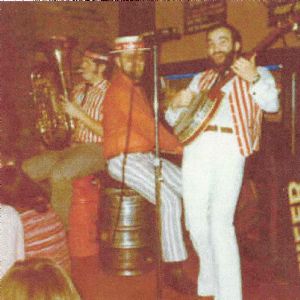 I'm pretty sure this is a Shakey's.

Maybe, maybe not. Shakey's, if I'm not mistaken, was a "franchise" operation, so it's likely that there were some regional differences in the costumes and some of the decor. I'd guess that even though the one I worked at never had any kind of horn player, that in more affluent places, horn players may have been affordable. I do remember that our piano was a piece of crap, rarely tuned, and the player sat on a chair rather than a beer keg. I had to fix it once or twice during breaks.

I remember Shakey's! They had a good sized band when I was a kid, and then one day we went and they had a big player piano behind glass with a drum and a couple other instruments attached and no more band. A sad day for me, I loved the band. There was indeed a tuba and other horns as well as the banjo and a piano. Thanks for the memories!