I am working on a PW John Grey (English) banjo. The poor dear has had some bodgy repairs in the past. I am going to fit some Gotoh tuners. In the photo it shows holes and other damage.
What would be the best options for filling and colouring the holes so it reasonably matches the finish? 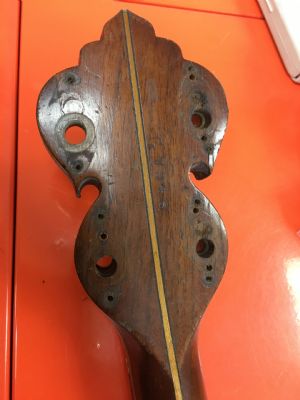 If ANY of my opinions were actually humble, it would be my humble opinion to just LEAVE 'em.
It's like the tattoo on great-grandmother Mary's forearm.
Part of the Personal History.

If it doesn't affect the tone, why bother changing it?

Cut some slivers of matching wood and glue them in with CA glue. Trim flush with a razor blade, then over-fill with more CA, scrape off the ca until the repair is smooth and flush. Mask and overspray with lacquer, wet-sand, buff & polish

Read everything on peghead repair (guitar and banjo) on Frank Ford’s www.frets.com.

The French call those scars Medals of Honor

I see obsolescence superseded, it looks like more than once

Leave them, because who really cares whatâs on the back and as said, they are badges of honor.

If you really want to make them invisible, make dowels the size of the wounds from wood of the same species as the neck. Fit them them in the holes with the grain aligned. Use hide glue. Sand, buff and finish. If done right, should be near invisible.

Also, follow Bill Rogers advice before you do any of the above.

For some reason I cannot see the photo, but I think I understand the issue.

First, I don't think you want to make "dowels" for this as a dowel put into a hole will show end grain which will stand out like a sore thumb.

I expect Alvin is thinking more of a "plug" which is made with a plug cutter. The end of such a plug would have grain you could align with the wood being patched. I have used this method on banjos and furniture and it looks better than a lot of methods, but is usually not quite an invisible repair.

Another repair I have done for a similar issue was to use a hand router to shave some wood down around the area being patched and apply a matching veneer. I recently used this method on a peghead which showed the center lamination stripe in the back of the peghead, which the owner did not want covered up. Someone had missed the mark in drilling holes for tuners, and plugged them with dowels not even close to the same kind of wood. He did want that covered up.

With that one I routed a thin layer each side of the lamination for that half of the back of the peghead. As described I used a small hand router and shaved each side up to the transition for the volute. I covered each half with veneer matching the surrounding wood. This was nearly an invisible repair, with the ends of the veneer pieces getting lost in the curve of the volute which I purposely stained a little darker. The only visible indication of the repair was the grain shift at the joint between veneer and volute, which was something you would have to know was there to look for it. It was tedious to do, and not something I would normally do unless the instrument merited such a repair, or as in this case the owner asked me to preserve the original look with the center stripe showing. Were it my banjo I would have simply covered the whole back of the peghead with wood matching the headplate on front.

I try not to use dowels. Plugs are far superior for two reasone: the grain matches better, and should the peghead shrink or expand due to weather changes, the dowel will never expand and contract the same way. The finish can crack, and in the worst case, the dowel will stand above or below the surface of the peghead.

Thanks for all the comments. I decided to leave it alone. Have installed Gotohs from Bob Smakula. 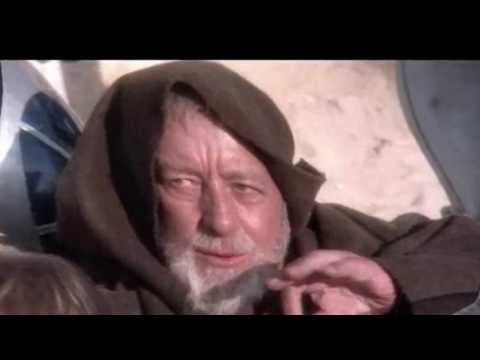 "Those aren't holes which need filling..."

"May the farce be with you!"