Another one to get the adrenalin flowing....

.... I've hit a couple of deer over the years [thankfully no personal injuries] and had one very close call with a  horse, but thankfully never a moose, or a bear or pig, which I understand are pretty bad.

Iâve come close to hitting a cow moose at night in northern Ontario (way, wwaayyy north of hiway 7).
I also came close one night near Langenburg , SK ,, a herd of horses on the road. I was loaded to the hilt with chicken so the braking took some extra 100âs of yards/metres/meters ...I just grazed one ofâem as they scattered when I got up to them at ~5mph.
One driver told me heâs driven through a herd of âghostâ horses a few times near Blackie, AB, always at night after leaving the Cargill beef plant near High River.

WOW!!!The only other animal Iâve seen drop itâs rear and slide like that is a reining horse.
Man that was supercilious close.

i was driving one of the rural roads near home about a month ago, when a flock of about 20 chickens (led by a rooster) ran/flew out from the roadside brush and across the road in front of me. I know, I know, don't ask me why. Never saw anything like it. Must have come from somebodies farm. Gave me a start I'll tell ya.

* in case You ask, I missed them all!

Driving up near Kewaunee, in northeastern Wisconsin.
Tom turkey decided he'd show the three hens with him how tough he was, by slamming himself against my driver's side door.

r.i.p. Mr. Turkey
By the time I got turned around, another motorist had already removed the corpse for a decent burial or meal.
But there were a few fluffy feathers at the scene, so I took one, and later stuck it in my hat band. 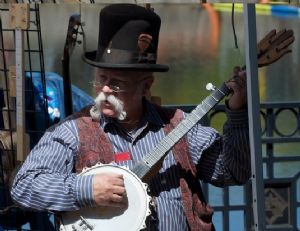 I had a close encounter with a reindeer when driving down a road in northern Sweden in high summer, many years ago. The road was empty and flat and the tarmac shimmered in the midsummer heat. I may have been driving slightly above the posted speed limit. Suddenly, the heat shimmer resolved into a tall, dark line perpendicular to the yellow center stripe. Fortunately, the brakes on our little rental car were good.

The reindeer cow was casually marching down the road with her nose tracking the center line. She was probably seven feet high at the shoulder and doing a good ten miles an hour. When we got where we were going one of the locals told us that, yes, they do that all the time. Theyâre not very smart, but you donât want to hit one. They cause a lot of damage to the car and then thereâs all the paperwork.

I broadsided a Black Angus bull at 50mph on a moonless night. Out of pitch black he turned his head and I saw eyes just before we hit, VERY short tire skid marks! It had just been purchased at auction that morning and managed to get out of a pen and on to the road. It was epic. I survived, the bull did not and neither did my Chevelle SS. All on the scene agreed that I was very, very lucky.

<snip>One driver told me he’s driven through a herd of “ghost” horses a few times near Blackie, AB, always at night after leaving the Cargill beef plant near High River.

..... real ghost horses, or these ones?  https://calgaryherald.com/news/local-news/0205-horse-capture

....and for your viewing enjoyment, somewhere along a highway in AZ, several years ago, here's one cow that didn't make it: 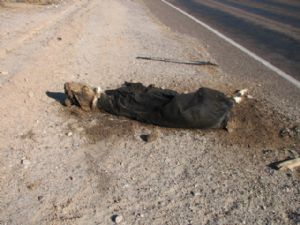 Pretty sure I wouldn't want that case of road rash.

Was living on a farm about 5 miles west of Monroe Wisconsin and one night about midnight had a knock on the door. Was one of the guys I worked with, he hit a black angus steer that had gotten out of our pasture and wandered out on the road. They towed the car away and rendering company came out the next morning to haul off the 1000# steer. $800 damage to the Mercury Capri. No damage to the driver, he was not sober enough to feel it too much and he sobered up before the county sheriff got there.

We are over populated with deer where I live. I saw one standing 5 feet from the lane I was in while traveling at 50mph on Friday. It was a warning to slow down and try and stay behind another car a safe distance.

I had 'em on a couple of vehicles 'way back [fwiw, I don't think I had them on the two vehicles ^^^ I schmucked the deer with].  Research (?) at the time seemed to say they weren't effective, but I was talking to a Greyhound driver and he said that the company had put enough miles on with/without to KNOW that they worked.... so I tried 'em ... for a few years.

[P.S. I figure we need something else to argue about.... who needs guns, Covid, politics and economic policy when we have real important stuff staring us in the face?

Edit: Ron, sometimes I take the opposite tack.... tuck in behind a semi, figuring "better him than me."  I know it doesn't change the chances of a critter hitting me from/on the side, and I do it with heightened attention, so I figure I'm not upping the overall risk.

I do that too, I use a "Blocker" if someone is moving too fast for our rural route road I tuck in safely behind them & use their lights to see farther ahead & hopefully their bumper to clear the way.

You have to be aware of the shine from their eyes & that if you see one one there is probably more following it.

I got T-boned by a dear about a year ago. Rainy night, going slow, I saw one run across the road in front of an oncoming car, so I slowed down even more. As soon as the next oncoming car passed me a deer ran out behind it and right into my left front quarter panel. The insurance company almost totaled the car.

My first deer was on the 401 headed east out of Toronto in rush hour traffic. It was lying in our lane and I couldn't change lanes. Luckily (for us) it had already been flattened somewhat from being run over by rush hour traffic.

The second was on Highway 2 west of Cornwall, in the dark, ran right across and hit the left headlight area. It ran off. That was in our first car, the '02 Accord. Some time later a deer with attitude hit the left passenger door as I was preparing to make a right turn to our subdivision.

Then one evening the VW Golf Wagon hit a deer that had just been hit by an oncoming car, on Highway 2 just around the corner from home. Again, it was invisible. Who'da thunk someone would hit a deer and toss it right in your path? The car went airborne and was in the shop for ages.

I got some ribbing over our cars' attraction to deer. I hope our white Subaru is immune.

The times I've felt guilty were for the red squirrel, and for the bunny that ran across and then turned back.

In the fall during hunting season, especially after dark, I drove defensively. When I saw an animal I treated it like it was a human "toddler" wandering around. A person can't predict their behavior.