Is this a good setup? Or should I do something different?

The title says it all. Look at this diagram and tell me if it's a good setup or if I should do something else, or add another component. 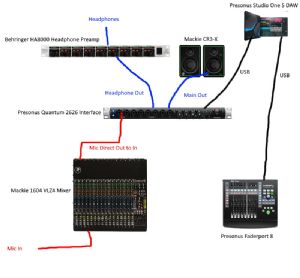 Should work, but it looks like overkill. Why do you need the Mackie mixer, and the headphone amp? You can plug both mic and headphones right into the presonus preamp/interface.

It would help to know a bit about what the setup is for. How many mics and/or direct instruments will you be recording simultaneously. How many different headphone mixes, and how many musicians needing headphones simultaneously? What are you recording?

I agree that the mixer and headphone amp seem rather surplus to requirement. What microphone is being used? How it's positioned and the characteristics of the room are important things to consider. I've seen many recordings of banjos in nasty echoey rooms which defeat the point of making the recording in the first place.

So I have the mixer in between the mic and the interface so I can tweak the sound of things and it's set like that.

The mixer is probably not needed. You can do the same thing it does and more with studio one. Either record dry with or without effects on the channel and mix during post in studio one or record wet with the eq needed in the input channels in studio one. Not sure what the mixer will do for you other then take up space. That type of mixer is better suited for live performance mixing, not recording.

The interface and headphone amp/mixer may be overkill also. It depends on how many mics are being recorded at once and how many musicians need headphone monitoring.

If I were you I would slim down the setup and put that extra cash towards making the room sound better, (sound diffusers, bass traps, etc.).

You can do all the tweaking you need in your DAW software. The mixer is just a superfluous element in the signal chain, a potential source of noise, ...

In addition to having much more processing capacity (graphic and para EQs, compressors, ...) than the mixer, sending a dry signal from the mic straight to the interface also gives you the ability to modify everything later if necessary. The sound you like when recording the banjo might not be right once you've recorded some other parts and drop the banjo into the mix.

Again, it's really hard to offer any real advice without knowing anything about what you want to accomplish. Recording a solo banjo (or one instrument at a time) in the living room is very different than bringing a 6-piece band into a professional studio for a one-take session, and requires a very different setup. Which are you?

loonsailor
I am my band when recording. I lay down a scratch guitar track (with vocals too if it's a singing song), follow with the bass, then add a mandolin chop, remove the scratch and redo the guitar, then add the vocals, then the banjo, fiddle, mandolin breaks, and potential guitar breaks.

So I record each instrument one at a time (unless I have two extra sets of arms I didn't know about haha).

loonsailor
I am my band when recording. I lay down a scratch guitar track (with vocals too if it's a singing song), follow with the bass, then add a mandolin chop, remove the scratch and redo the guitar, then add the vocals, then the banjo, fiddle, mandolin breaks, and potential guitar breaks.

So I record each instrument one at a time (unless I have two extra sets of arms I didn't know about haha).

If that is all you are doing, then your proposed setup is overkill. Your interface only needs 2 inputs  if you are recording stereo,  1 if you are not, a headphone out and 2 outs for the monitors L and R.   You don’t need the headphone mixer and you can get a 1x2 or 2x2 interface pretty cheap.

OK. So, I'd skip a bunch of that stuff. Get a 2 (max 4) channel interface, either a basic one like the Audiobox 2 or Scarlett, or a fancier one with upgraded mic preamps like a Clarett or a UA Apollo.  The mic / instrument goes straight into that.  Skip the headphone amp and mixer.  If you've got extra coin to spend, put it into the mic, monitor speakers, headphones and any necessary room prep.

As for the faderport, it's a judgement call.  You might start with a single channel one, or none at all, and see if you want the big one.  But I wouldn't argue against the one you chose.  Personally, I use a simple transport control pad (this one, though it's for Cubase only and no longer made) and I find it essential, both for recording and for mixing.  I keep thinking about getting a fader type control surface, but honestly I'm fine mixing with my trackball (much better than a mouse) and I'm not willing to give up the desk space for something like the big faderport.  I guess my advice would be to skip it for now and buy it later if you feel frustrated without it.

Remember that more gear rarely gives you any higher quality recording, but it will give you more headaches, stuff to learn and figure out, cables and clutter.  If you're both playing the music and doing the engineering, you want to simplify the recording as much as possible so you can think about playing and not engineering.

Also, if you are into Presonus stuff they have a single faderport they has the audio interface built in.

'Believe Me If All These Endearing Young Charms' 41 min