This has the look of the typical or quintessential 17 fret open-back tenor banjo from the teens. This banjo looks to be entirely original (though missing inlay at fret 5) and in good shape too. I've seen the odd "tone ring" fastened with screws to the top of the rim on a few other tenor banjos from this period and very seldom the peghead shape which in my view is attractive.  But I have no earthly idea of who made it.  I'm guessing Epi Stathopoulo and The House of Stathopoulo based on the manner of securing the neck to prevent wobble though I don't recall Epiphones with a screw in the heel.

Any idea who made this banjo? 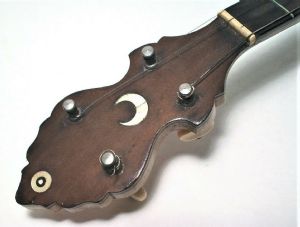 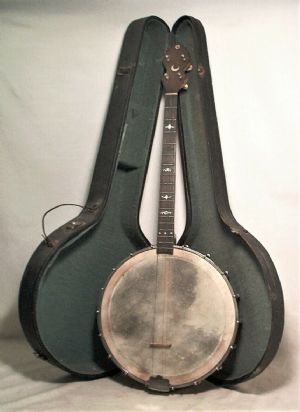 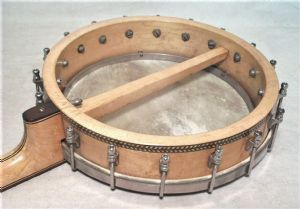 I get a Puntilillo vibe from the peghead shape and rim marquetry..

Yup, Puntolillo built a lot of these in the early '20s. I had one branded Regina, but I've also seen them branded as S.S. Stewart, Bell, and other names as well. Interestingly, this one has a less massive tone ring than the others I've seen.

I, too, see some Puntilillo elements in this, but can also see some hints of Stathopoulo. I lean more toward Puntilillo, though; possibly one of his banjos that predates the usual june, 1920, tone ring design seen on Reginas, Bells, and others he made in the early twenties.

Thanks for your replies. Not a Puntolillo. See Regina, a typical Puntolillo from this period, attached. AFAIK Puntolillo invariably used sheathed metal rod not a wood dowel. It's something more exotic. C'mon guys. 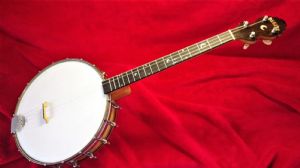 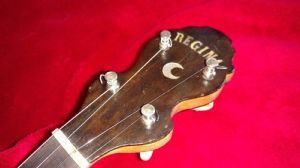 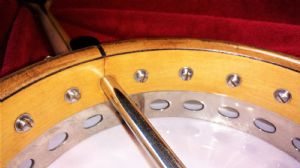 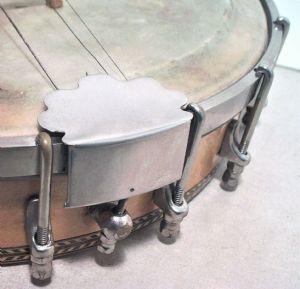 Early Puntolillos did indeed use a wooden dowel. I've seen tubes on this large rim too, but mostly dowels. My Regina had one, and the tone ring was stamped with a patent number that belonged to Puntolillo.

Seriously! I've never seen a Puntolillo with a traditional wooden dowel. But, you've convinced me. It must be a Puntolillo!! By golly, I found an S.S. Stewart branded Puntolillo in my photo album with sort of similar peghead shape and position inlay including the three dots at 15. This "Stewart" though has the sheathed metal rod and the patented tone ring. The subject banjo must have been quite early in Puntolillo's career and perhaps predated the 1920 patented tone ring.

Thank you all for coming to the aid of the party. 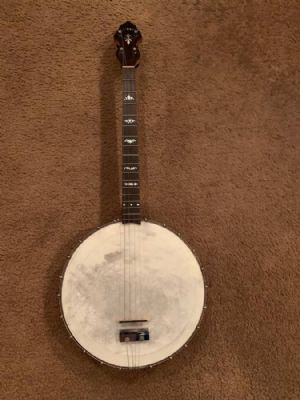 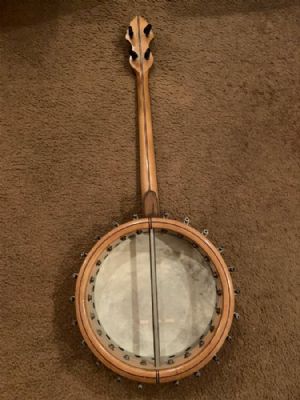 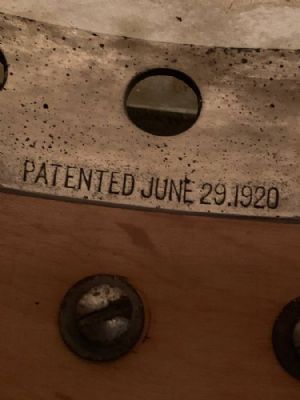 If you believe Puntolillo built banjos. Like others from the Italian guild in NY, they went from crude works to shop grade instruments. The neck itself has Lange written on it for me.
The shoe brakets from another favorite.

I think Puntolillo built banjos. He even patented a tone ring. BUT, he is the most mysterious of all the New York City tenor banjo makers bar none. Attached is the total extent of my publication research re: Gaetano F. Puntolillo. He is a ghost. 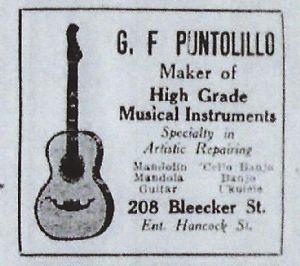 I've seen a few Puntolillo guitar banjos with the same wood dowel and "hook" bolt buried in the heel, passing through the rim, and the same non-patent tone ring.

He owned patents too, yet showed zero ability to produce any from his 377 Broome St home address, and early Mott St location which was a sheet music store with a small back shop to sell/install strings.  Under the hood of my high-end Iucci no.5 Baby Grand was the proof I needed.  Ludwig Stamps.  Yet, the marquetry, backtrap methods where common to Puntolillo, similar tonerings as Favilla.  Can you tell I'm not sold on any of them...?

Peter - I get your drift. To summarize, you suspect that the smaller banjo brand names allegedly from certain sections of New York City were not actually manufactured by said individuals but instead the banjo building itself was contracted with carefully drawn specifications by said individuals to established banjo manufacturers and the completed banjos then sold by said individuals from their little instrument repair shops or music stores as their own creations. That is why we can find so very little about "banjo makers" like G. F. Puntolillo, et al. Well, your idea has a little ring to it. For example, how did Puntolillo supply Buegeleisen & Jacobson with scores of S. S. Stewart and S. S. Stewart Wondertone banjos and make and market his own Majestic brand banjos as well. It seems that such an undertaking would require an adequately sized shop which in Puntolillo's case we cannot find. Several people (including Tsumura - attached) often see Wm. L. Lange touches in Puntolillo banjos. Or another possibility is that said individuals could have purchased all the necessary banjo parts from mainstream banjo manufacturers or parts makers and assembled banjos from the manufactured pieces and parts. Food for thought. 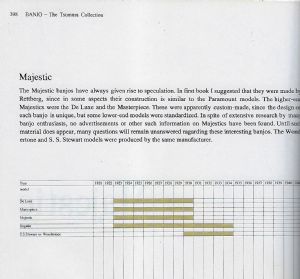 beezaboy I can say from first hand experience that it is not uncommon for a "manufacturer" to have someone else make their product... even private label product for another retailer/distributor. This is a long established tradition and is done more so today than any other time in history (but has always been done).

Many "manufacturers", be it their own name brand, or private label, will use subcontracting factories to do all of the work, including shipping to a distributor, while the "manufacturer" will never touch the products that they "manufactured". This is and was the way things work.

Buying parts for assembly is/was also common. We know that Buckbee supplied banjos in all levels of finish (we have an account of this). You could buy parts or finished banjos or anything in between from them. We know that the Dobson family would at times buy partially finished banjos and finish them with decoration and engraving, we have accounts of this. We also know that Buckbee supplied most of the Dobson branded banjos finished and complete. Martin Brothers Guitars built many of the Patent Closed Back banjos.

The early Vega catalog offers more banjo parts than Stewmac ever did. These parts, like their necks, would not be mistaken for any other make.

J. B. Schall's catalog gives the impression they sold more parts than banjos. S. S. Stewart bought the rims and hardware for his early banjos from Schall.

The complication comes in when we have small shop brands that are attributed to large factories, yet we have evidence to the contrary. An example of this is Farland banjos. There are letters extant that make it clear that Farland was assembling and finishing banjos in house and had people working for him to do the same. His strings were made by him. One letter has him complaining that nothing gets done when he is on tour and orders pile up.

It is often claimed that Fred Van Eps banjos were made by Lyon and Healy. Yet all the ads said that they were built by FVE and distributed by L&H (until FVE bought out Henry Burr). We know he had people working for him in a barn shop behind his house. I have a bowl in the back recording banjo that has his signature initials written on the heel (visible when the neck is removed)-- on a banjo style that is often claimed was built by L&H.

What does all of this mean? I don't have a clue. Why did I write it? I have no idea. Perhaps my point is that a manufacturer is capable of building a large quantity of product without ever turning on a machine or even owning a factory. Sometimes that product is private label.

I've seen a couple of Majestic banjos that definitely had Lange resonators, so I have no problem believing that there was a connection. Maybe Lange built these early necks, too, though I don't believe they built any of the 19-fret Majestic necks I've played. I do believe that Puntolillo did his/their own inlay work, though, at least in headstocks; the style is quite distinctive, especially around the lettering.

What got me thinking more about Peter's idea was this Majestic brand harp guitar that's on the internet (attached). It is reported that there is a paper label inside the body with yet another Puntolillo address. If you are making lots of Majestic banjos where do you have time to make a harp guitar?

Joel - Thanks for your post.  I'm a little disappointed by all of this.  I always had it in mind that Puntolillo had a banjo factory competing with Lange, Oscar Schmidt, Stathopoulo, Houdlett, et al and one day we'd find it.  This because Puntolillo banjos are distinctive in may ways. 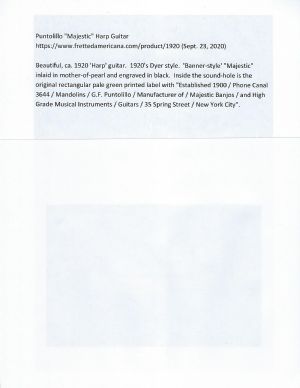 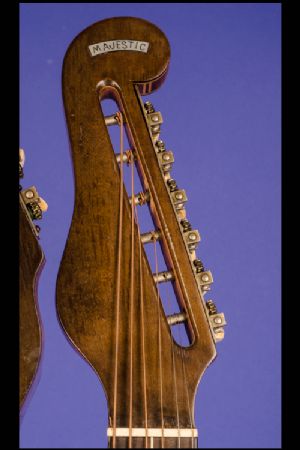 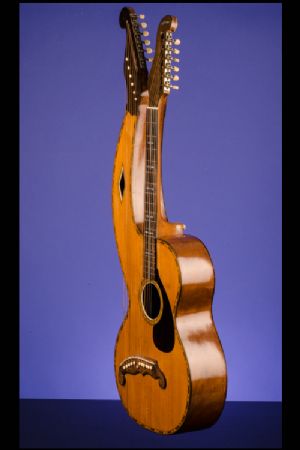 While I spend my evenings and weekends in my garage/shop cutting and sanding banjo bridges and punching and pounding banjo thimbles, I spend my days working for a manufacturer that makes industrial products and craft component items.

We have very real factories in the US (two) and one in Ningbo China. These factories produce a large volume of products in house. But we also use sourcing and subcontractors to buy parts and handle other aspects of the manufacturing. We package, assemble and finish everything we sell in our factories. But parts can come from other places. Part of my job is to keep track of all of this and make sure we are compliant with any needed safety testing or factory social auditing.

That is just a normal part of making industrial and consumer goods. if you get a big order, or if one of your customers wants something that you can't physically make, you find someone who can help.

If you have a product idea to develop, but can't physically make it, you find someone who can. It is still your product and design even if you did not create it from raw materials.

I have to think along the same lines as Joel Hooks. It's actually rare for a company to produce their entire product in-house or in one location.

I'll also add that in many cases, the sales office is not even in the same location as the factory, and many times will be relocated to a more favorable, less expensive, or fancier location, or just moved to a better part of town, while the factory remains in the same place.

Vega rims weren't made in the Vega factory, nor was the hardware; Gibson tone rings came from a foundry owned by others. In the early days of the Model T Ford, the engines came from the Dodge Brothers. Those brothers later made thier own cars, but the bodies for them were purchased from Budd in Pennsylvania.

Every banjo company around had a tendency to copy what worked for another company, and is one of the biggest reasons why determining who did what can be so troublesome and produce such speculation and debate. But there is one thing certain about Puntilillo: he held patents, so he did produce his own designs, or at least had someone produce them. A set of tuners from another company, or some generic brackets, or a resonator made somewhere else cannot change the fact that Puntilillo's products were not Langes or any other New York makers', even though a bit here and there may have come from other companies.

'Dustin Lynch Country or not?' 29 min