There’s a musical intensity in Yearlings in the Canebrake that ropes you in.  The tune’s history leads to the southwest, known well for its cattle country.  As you listen can you imagine frisky young bull calves and heifers held in by a natural fence?  Captain Moses J. Bonner recorded the tune in 1925 at age 78.  He lived from 1847 – 1939, was born in Franklin Co., Alabama and lived in Fort Worth, Texas.  He was a Confederate veteran who played on the very first radio barn dance broadcast in Fort Worth on Jan. 4, 1933.

Yearlings in the Canebrake also goes by Cattle in the Cane (or Canebrake) and has been called a bluegrass/Irish mixolydian tune.  Anyone who knows its Irish roots might enlighten us as to its origins. I first heard Gerry Milnes’ Cattle in the Cane (learned from Glen Smith) and arranged it for clawhammer banjo.  Upon listening to Capt. Bonner, I heard similarity.  When I first posted Cattle in the Cane six years ago, Don Borchelt had this astute comment: "I recently learned a closely related tune called Yearlings in the Canebreak. The A parts are almost identical, but where the B part of Cattle goes to mixolydian, the B part of Yearlings goes to major; where the Cattle melody goes from the A to the G chord, Yearlings moves from A to D. Interesting."

The tune is found from coast to coast, as well as places in between. A 1968 Cattle in the Cane recording with fancier fiddling comes from Bill Northcutt (1935-1992) of the Houston region of Texas and it has made the bluegrass circuit.   Both Art and Charlie Stamper from Kentucky knew it.  It’s been recorded in the old-time style by Greg Canote of Washington state all the way to Mary Z Cox in Florida. When you listen to them all you hear the variations and individual expression that keep a tune alive and evolving.

An interesting description of Yearlings in the Canebrake is found in the Traditional Tune Archive with a quote by President Theodore Roosevelt describing canebrakes in Louisiana:  The canebrakes stretch along the slight rises of ground, often extending for miles, forming one of the most striking and interesting features of the country. They choke out other growths, the feathery, graceful canes standing in ranks, tall, slender, serried, each but a few inches from his brother, and springing to a height of fifteen or twenty feet. They look like bamboos; they are well-nigh impenetrable to a man on horseback; even on foot they make difficult walking unless free use is made of the heavy bush-knife. It is impossible to see through them for more than fifteen or twenty paces and often for not half that distance. Bears make their lairs in them, and they are the refuge for hunted things.You can see why pioneers may have used canebrakes as their fencing.  The link also has a photo of Captain Bonner with his sons.

Mary Z Cox with Kerry Blech, Yearlings in the Canebrake

Lew Hendrix, Cattle in the Cane

Charlie Stamper and J.D. Wilkes, Cattle in the Cane

Kerry Blech and Bob Blanham, Yearlings in the Canebrake

Cattle in the Cane 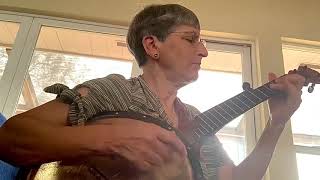 VIDEO: Yearlings in the Canebrake and Cattle in the Cane (TOTW)
(click to view)

Yearlings in the Canebrake (CH) tab

Cattle in the Cane (CH) tab

Both tunes have an Irish set dance feel to them

This forum is about playing style, so here are some thoughts.  My style has become more minimalistic through the years, but wants to portray as much melody as possible.

The first two versions below are of the expertly played flat-picked guitar.  I used to listen to players like Doc Watson, whose music I'm so fond of, and thought I wanted to make my banjo sound that good -- an impossibility I came to realize.  I tried getting the notes with 3-finger picking.  I went through a similar phase where I'd hear just as notey arrangements by fiddlers whose recordings were my learning source.  I tried playing the notes in fiddle notations, such as from O'Neills Music of Ireland book.  Such a clawhammer style was way too notey, both because of difficulty in playing at speed and the sheer amount of eighth notes, as if they had to be there.  I came to feel similarly about bluegrass banjo --  more notes were played than was needed, extraneous to the essence of a tune's melody.

I made a conscious effort to listen for basic melody, hearing the basic notes that make a tune more like a conversation.  If people speak rapidly with unnecessary verbiage, the energy is different and it's often more than I can comfortably take in (not to mention the added challenge of some hearing impairment).  In arranging for banjo, I find it comforting to realize I don't need all that notiness.  The melody is the part that flows with its unique timing and expressive pitch changes.  It's what people would hum or put lyrics to.

These days I still go for melody, yet can't get away from wanting to emulate the fiddle, just because I like how it sounds.  So in my arrangements there's a combination of simplified melody, but with some of the unique syncopated expressions I like in the fiddled version.  I'll use some of its extra notes, but eliminate others when they impose a daunting logistical task to play.  And I play slower than a fiddle, making the physcial limitations problem less an issue. You'll see in my tabs that I almost always learn via a fiddler.  There's a stylistic desire Adam Hurt and I have in common, to listen to and learn from the source fiddler, but portray the tune as a solo banjo piece, often too notey to back a fiddle.  That made my 3 1/2 years of Skype lessons with him congenial from the beginning.

When played solo, like by Merit Cooper below, space between notes is pleasant.  When played more quickly with fiddles, like by Spencer and Rains below, listen how Brendan Doyle's banjo melodically and rhythmically frames the fiddles.  But it's the fiddles that carry the tune.

Any thoughts on style?  I haven't touched upon rhythm, a facet of old-time banjo that many value even more than melody.  Feel free to express and clarify your thoughts, as I have done here.

And now listen to a mellow banjo version by Merit Cooper which she got from Mary Z Cox.  Nice, isn't it!

And old-time stringband style, from Spencer and Rains, who make their home in Texas and Kansas, where this tune feels right at home.

'home made cases for banjos and other instruments' 4 hrs