After several months of asking my wife if she minded my practicing, she finally caved and asked me to get a mute.

Mikeâs is great. Dampens the volume without ruining the sound. I and my wife are very pleased.

Best mute in the business. It always felt strange for me to play without it after practicing with it on too much though.

I love mine also. But I would only use it on an as needed basis. Of the three things that we work on during our practice time, The 3 Tâs.... timing, tone, and technique, youâre not able to work on the tone during your playing because of the mute. you can still work on timing and technique, but your tone will be all over the place when you take the banjo mute off. Some notes will be too loud, some notes not loud enough etc. etc. Therefore, as I said, only use it on an as needed basis. Enjoy your mute.

It's a pacifier for the wife.

My wife hasn't complained about the banjo noise. I figure if it is loud enough to annoy me it is probably going to annoy her so I don't play when she is around.

Playing the RK85 with a Mike's mute is like playing an electric guitar without the amp. I think it sounds fine. It's probably not good for someone working on tone and technique. If the last 56 years of playing is any indication of my learning curve, I don't think I'll ever get to the tone and technique part.

I went a slightly different direction with my mute. Mine is a DIY

After several months of asking my wife if she minded my practicing, she finally caved and asked me to get a mute.

Mike’s is great. Dampens the volume without ruining the sound. I and my wife are very pleased.

Just put in my order for one of the Mike's mutes. I've tried most of the others and have not been satisfied yet.

They either don't mute enough, or they make the banjo sound like a sitar.

I took a cloths pin pulled the spring used the flat outsides and glued corn dog sticks as spacers and glued the tips with titebond. I slide it under the strings around the bridge. If I suspend the pin above the head I get a moderate volume reduction. Sometimes I press it against the head. which. Decreases the volume even more, but sometimes buzzes.

Here is a picture of the 1930’s homemade model airplane flat blade clamp described above by Texaspaul
I glue felt jaws on. And I use the clamps for many other jobs in my shop 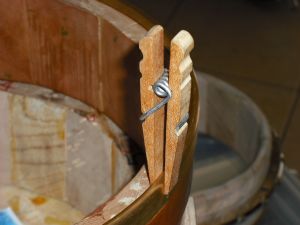 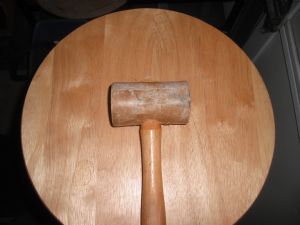 Just put in my order for one of the Mike's mutes. I've tried most of the others and have not been satisfied yet.

They either don't mute enough, or they make the banjo sound like a sitar.

Today I received my Mike's mute in the mail. Shipping was a reasonable $5.

First impression-- the mute is very well made. Solid brass and aluminum construction. Should be corrosion resistant. Fit and finish is flawless. No rough or sharp edges. Substantial and strong, but not too heavy., Machining is precise, and neatly knurled knobs adjust easily. I would not care to make one for the $30 price tag.

Mounting to the bridge was simple and instinctive. Needed no instruction and took less than 20 seconds to fit in place.

Over the past 55 years I've bought and made a number of banjo mutes. My first commercial one was an old Elton model that helped, and cut the sound volume down by maybe 40%. The tone quality was somewhat sitar-like, with no banjo snap and loads of sustain. Mostly I preferred to stuff something inside the pot rather than use the Elton.

More recently I tried a Gold Tone, which seems to be popular these days. Mine never fit too well to my bridge, and tended to move around a little when playing. The sound quality was rather plunky. Almost no sustain. Not a bad sound but not exactly banjo-like. I did like that it was quick to mount, and couldn't be simpler in construction. I would say that it cut back the volume by maybe 25%. Not enough to make my banjo wife-friendly. In combination with a stuffed pair of socks under the co-rod helped-- but not very much.

The Mike's mute on the other hand, seems to cut the volume by somewhere around 80 or 90%. Even the wife easily noticed the difference. What sound was left was pleasant. Warm, but with a lot of sustain. Not much snap but plenty of ring. However the banjo was estremely rduced in volume. Adding a rolled and stuffed pair of socks cut off another few percent of volume, and reduced some of the sustain.

In general, I would say that the Mike's mute is the best one I have tried to date. I do think I'll be able to practice using the mute and maintain spousal sanity. For that I would say that it was a positive test and well worth the modest price.

You can make lighter bars for Mike's mute, if you want less dampening of sound. Use his bar as a guide, but make your's out of thinner brass, or other metal. Note: the holes in the bar are Not centered. That is part of Mike's design; if you center them (like I did with one bar), the bar will not fit correctly; I just filed off the long edge of the bar till it fit *grin*. I have 2 bars, one 1/2 Mikes' bar weight, and one 1/4 the weight.

The lighter bars reduce the sitar effect somewhat, which is why I made them. Actually, though, I learned to like the sitar, and sometimes use Mike's original mute just for that effect. As you can probably guess, I play solo at home mostly - the banjo-sitar would never be heard in a jam *smiles*. This could be a "feature" if you wanted to try jamming but were afraid of making bloopers. btw, bloopers that are Huge to you are probably not that big a deal to the others in the jam.

Iâve had a mikes banjo mute for 10+ years. I love it! In fact, I just bought a radiused one for my new banjo.

Started playing banjo (first musical instrument) 3 months ago and really enjoy learning the craft. Bought the RK 36 in September and this baby rings out. I received mikes banjo mute today and absolutely love it. Iâve sat at the kitchen table for 2 hours today just picking away. Nice quiet tone. Wife and kids are happy about it too. I Highly recommend it.