Any photos of Crowe playing the archtop Granada in the 1950s?

Can anybody post a photo of JD playing the arch top Granada he played early on with Jimmy Martin and the Sunny Mt. Boys? I can't ever remember seeing such a picture.

Chris Warner, J.D. Crowe and Bill Yates at Bill's house in Hermitage, TN 1968 Kinda hard to see but it looks like a gold archtop. That's a Sunny Mt Boys photo, for sure!

Below is link to a photo of J.D. with Jimmy Martin. I'm not sure if it's the same banjo mentioned in the original post, but it does look like an arch top.

Below is link to a photo of J.D. with Jimmy Martin. I'm not sure if it's the same banjo mentioned in the original post, but it does look like an arch top.

It's my understanding that early Granada was a 4 string conversion to 5 string. A bowtie neck from Gibson would have been just the thing, I suppose.

It is a 1969 bowtie neck with a fiddle shaped headstock. I came across an article/interview? that it is a prewar pot. It is on the Martin LP jacket, Big Jam Session however I no longer have a copy to tell if it is an archtop.

Although thinking about it more, isn't the banjo pictured on Big Jam Session "Banger"?

1969.  I wish I still had the Big Jam Session LP to see the detail but I believe the neck has a fiddle shaped headstock.  1969 was the only bowtie year with that headstock.

another pic of the bowtie neck https://mk0romakeyuexh0d7e64.kinstacdn.com/wp-content/uploads/2018/10/archives-jd-crowe-2.jpg

Does anyone know if the banjo in the photos is Banger? According to internet lore JD found Banger in 1956 without a neck and used it on Jimmy Martin recordings.

Although thinking about it more, isn't the banjo pictured on Big Jam Session "Banger"?

In the Bear Family Jimmy Martin box set booklet there are several very clear b&w photos of Crowe holding that banjo with bowtie neck, fancy peghead with modern Gibson script, and it's clearly a flat head. It looks identical to another photo in the booklet of Sonny Osborne holding an identical looking instrument, right down to the cam tuner cover.

I thought I read that the Granada was an arch top.

If I'm not mistaken, when JD got "Banger" it was just a pot with no neck. I think JD was playing an RB-150 at the time and in the transaction, JD kept the neck from the 150 and put it on "Banger". This is what he used for the remainder of his time with Jimmy.

The fiddle peg head neck, in these photos, is mounted on JD’s no-hole Flathead “Banger”.
The photo, that Wayne (RB3) provided...has JD playing Banger w/ Jimmy Martin. I spoke w/ JD about another Martin “promo” photo. There was a Country Music honky tonk bar on the west side of Buffalo NY that I went to infrequently in ‘67-‘69 (saw Don Reno there) where a huge B/W Studio-photo of Jimmy w/ Paul & JD (Just the 3 of them) hung on the wall above the bar. I asked JD about him posing w/ an arch top...he said it was Banger...but w/ a hide-head that had previously been on an Arch-Top.

You da man Brian! That must have been one of those pre-EPA heads that everyone talks about, and J.D. just wanted to get as much use out of it as he could.

That bowtie neck, w/ the fiddle peghead, was a â50âs (maybe late â40âs) RB-150 neck that I believe renowned banjo player/luthier Robbie Robinson Installed on PB-3 Banger âpotâ. He also modified the peghead from âfly-swatterâ to âfiddleâ peghead. He probably added the 21st fret Mastertone block inlay as well. Tricked it out!

That bowtie neck, w/ the fiddle peghead, was a ‘50’s (maybe late ‘40’s) RB-150 neck that I believe renowned banjo player/luthier Robbie Robinson Installed on PB-3 Banger “pot”. He also modified the peghead from “fly-swatter” to “fiddle” peghead. He probably added the 21st fret Mastertone block inlay as well. Tricked it out!

As I recall, that neck was on the banger until the Marion Kirk-built rosewood (Ode blank) FE neck was installed. At that point JD had someone, possibly Lee Vance, put a new fingerboard on it with ‘off-the-shelf’ inlays, and mounted it on a 1950 style -100 pot with an early Faulkner tonering. 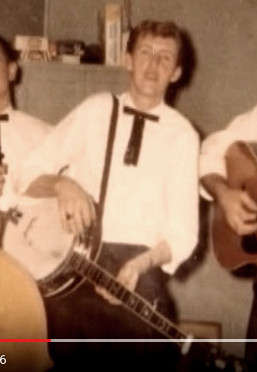 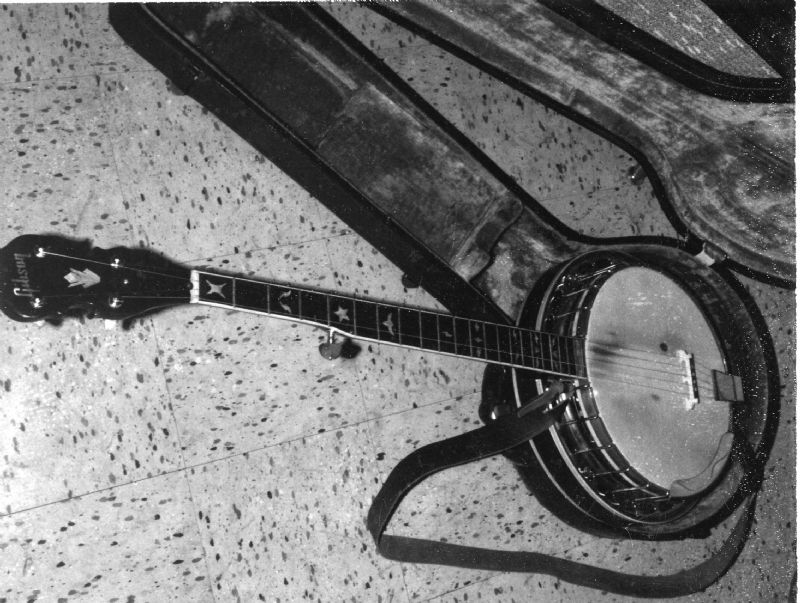 The fiddle headstock had one side cutout larger than the other and the fingerboard was too narrow for me. I reworked the neck to a double-cut with FE inlays and traded it off. Many months later I was staying with JD for a few days and was looking at his wife’s photo album. I saw a large clear photo of Crowe with the Banger and the bowtie neck clearly showing the larger headstock cutout. I asked him if that was the neck he sold me and he said “Yes, it was on my banjo all the time I was with Martin.” Had I known that, it would be on my wall in a glass case. 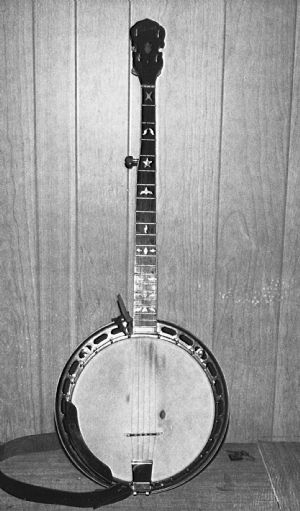 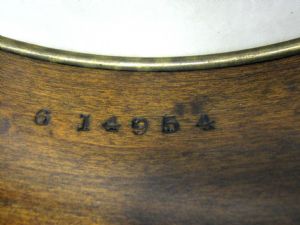 Could be, Brian, we'll have to ask Bickel.
I remember asking Sparks if he built it.  He said no, and either he or JD said Marion built it.
Just don't remember clearly!
I don't recall it being too heavy, but it was kinda wide.
Hope you are doin' ok.

The neck you are talking about was built by Thomas V. Haile, or just Tom, of Louisville. I was working for Tom, mostly doing his inlay work. It was either the Fall of 1964 or Early 1965, I'm not exactly sure, when Tom called me and told me to come over and hear this guy play banjo. He said we were going to be building a neck for him.

I went over and there was J.D. playing the banjo. I really didn't know who he was at the time, but I sure liked the way he played. Tom introduced me and said Harry will be doing your inlay work (just inlaying the pearl, not cutting it). J.D. asked me how much I charged and I'm not sure what I told him, but I asked him if he gave banjo lessons. He said sure. I think we worked out a deal for $5 a lesson, but after a short while, we became such good friends we stopped counting. We're still close friends to this day. I spent many weekends hanging out all day with J.D. and then going to hear the Kentucky Mountain Boys at Martin's (or even the New Limehouse before that). But that's a whole other story.

The neck was indeed made of Brazilian Rosewood. The inlay was the "Flying Eagle" or Reno pattern. I don't remember a whole lot else about it. I played that banjo a lot and don't remember it being particularly heavy. That neck wouldn't compare to modern necks because most necks being made at that time weren't exact copies. Tom was a good craftsman and made a neck that looked and played good, but it wasn't a close copy of an original. He bought the inlays somewhere, but I'm not sure where. It wasn't until I started working with Harry Sparks in the mid-70s that I really began to do real copies of Gibson necks. I remember us making a Granada neck for J.D. at some point. It might have been an entire copy banjo. I'll have to ask Sparky or J.D.

As luck would have it, and because nothing ever gets thrown out here at the Bluegrass Hotel, I have a piece of the rosewood neck Tom and I made for J.D. in the mid-60s. Tom said you need to keep a piece of this wood, so he cut me off a wedge shaped piece. I tried using it as a doorstop, but i was too hard on the doors. It is one hard piece of wood. Picture attached below. 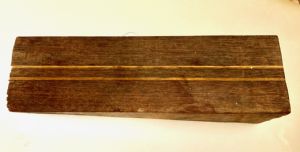 Hello Harry!
So good to hear from you - been a long, long time.
Thanks for setting us straight on the origin of that rosewood neck - good to give credit where it is due.
I had a long conversation with JD last night and he just could not remember who built the neck. He did, however, recall that he got the raised head Granada in 1956 from his good friend Lee Vance.

Good to hear from you, too, Frank. What's it been, 40 + years? I'll call J.D. and remind him that the rosewood neck was how we met. I wonder what ever happened to it. Other than becoming a doorstop, that is.