Link to video: The Luscomb Banjo by Thompson & Odell of Boston

"... the Luscomb banjo, named after John F. Luscomb, a highly regarded banjo soloist and composer who over the next decade designed several models. His first, patented in the late summer of 1888 but advertised by Thompson and Odell half a year earlier, offered a rim composed of two metal bands (inside and outside) with a third, of wood, sandwiched between them with its lip extending upward so that the skin head was stretched over it."

"The Luscomb Banjo Patented Aug. 29, 1888." Thompson & Odell published sheet music and sold musical instruments in Boston, Massachusetts. Charles W. Thompson and Ira H. Odell formed the business in 1874, and they operated a shop on Tremont Street; later moved to 523 Washington Street. The company was bought by Vega in 1905.

Special thanks to Jim Bollman for providing information relevant to this video. 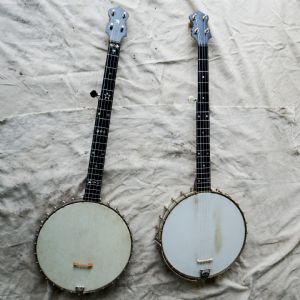 Interesting design. It's almost the opposite of what you see nowadays. A metal rim with a wood tone ring. Sounds great! And man you can play.