George H. (Doc) Green (1947-2020) was a self-made man, considered by many to be a genius. His main instrument was the banjo, although he also played mandolin, Dobro, guitar, fiddle, Native American flute, and was an accomplished songwriter. He played in numerous bands including the Lost World String Band, Lost Dogs, Spot, Simple Gifts, Playinâ With Fire, Flynnâs Creek Flyers, and Twice Shy. Besides repairing musical instruments, Doc also restored autos winning âBest Paintâ in a Classic Car Club of America competition, the Concours d'Elegance at Pebble Beach, for a 1947 Cadillac. He and his wife Lori founded Candi Creek Banjo Works (CCBW) in 1988 in Augusta New Jersey. In 1991 CCBW relocated to Gainesboro Tennessee and remained open until 2006. CCBW produced approximately 75 banjos. Each of his banjos was made to be at least a little different than its predecessors. Docâs banjo aesthetics combined elements of folk art as well influences from Gibson, Vega, and Stewart banjos, and classic automobiles.

In 1997, when Gibson moved Dobro from Huntington Beach to Nashville, Doc was hired to set up the machinery. As part of his payment, Doc demanded a unique custom Gibson guitar. Doc had a relationship with Gold Tone for a time, which produced a Doc Green model banjo. 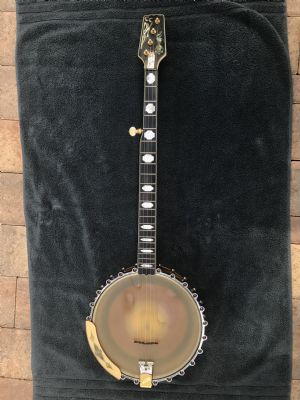 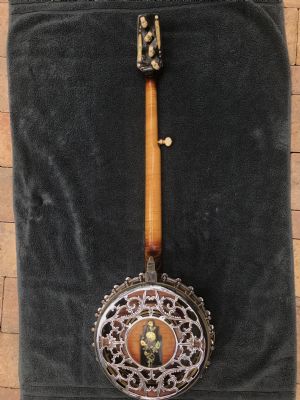 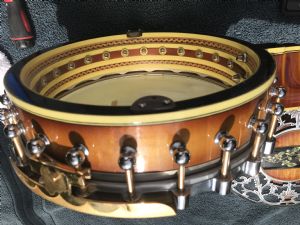 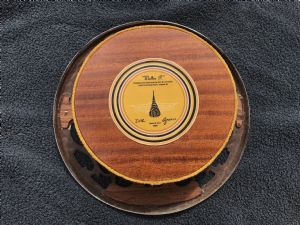 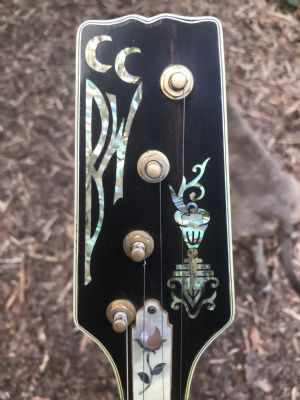 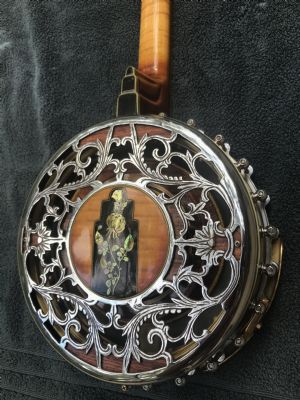 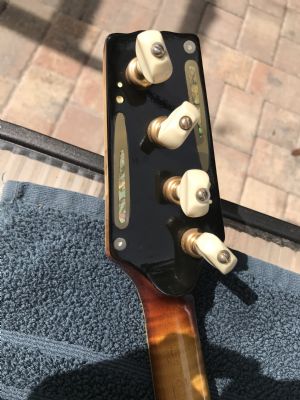 Walter P back of Peghead

Wow! What a beauty.

I knew him when he had his shop in Augusta. It was in the basement of his home in a residential neighborhood, but it was the kind of shop all acoustic musicians wish they had nearby. George was a kind and knowledgeable man, and also a wonderful repairman. You could learn so much in just a casual chat with him, and he had an inventory of some very interesting vintage instruments.

In 1989, I found an old Fairbanks banjo (Fairbanks & Cole model) in an antique shop and paid the magnificent sum of $12 for it. The strings, tuning machines, nut and tailpiece were gone, and the neck had a nasty bow. I found George's name in a magainze (Fingerstyle Guitar or Acoustic Guitar?) and was pleased to see he was only 45 minutes from me.

I took the old Fairbanks up to him. Within about 30 seconds, I felt as if I had known him for 20 years. He was kind and knowledgeable, and he assured me my banjo was worth restoring. I had him do the work, and he did a wonderful job at a reasonable price. I still have that banjo, and I play it regularly. I also bought a Martin 000-16C from him that I still have. If I remember correctly, he was also making a few Candi Creek guitars. I played one, and it had a magnificent sound.

I was disappointed when George moved south. Guys like him don't exactly grow on trees. Up here, the luthiers are electric guitar guys, so it's tough to get really good work done on a banjo or an acoustic guitar. Most of all, I misssed the change to chat with a very interesting guy.