A couple months ago, I started a black powder thread, and mentioned about my interest in 1851 Colt Navies and that I wanted to at some point either buy or build a Richards-Mason conversion.

So, I got the parts together and did the "operation" on a 5" Pietta model. The cylinder and gated ring were made by Howell's, as I liked the fact it's screwed to the frame, and has a removable firing pin, whereas those by Kirst don't. The ejector is by Kirst, though. Overall, it turned out nice, though I had a couple bugs to deal with while building it (fitting the ejector rod and keeping it from wobbling, adjusting the bolt after it began slipping while bringing the hammer to half-cock, and readjusting the forcing cone for the cylinder gap after getting a bit heavy-handed with a file when initially adjusting it), but I think it's ok. I will say the 5" version is quite handy, and is balanced just as well as the original 7 1/2". The barrel is unsleeved much like the original conversions, so its chambering is technically .38 Long Colt (which would have been rimfire early on and then centerfire on the originals, both with heeled bullets), though I can shoot .38 Special with hollow base wadcutters, which bump up to engage the rifling, much like Minie balls.

I have an original United States Cartridge Co. .38 short rimfire cartridge that was in some of my grandfather's gun things. As you can see, someone tried firing it in a centerfire...

those are some beautiful pieces,,,, great job

I have my eye and a generation 1 Colt Single Action Army (near mint from photo) that is coming up for auction in the next few week ...... doubt that I can afford it though. I love those old Colts although I have many more Rugers than Colts. An old Civil War era Whitney Naval Revolver sold at auction yesterday for $450 ...... pretty rough but all there and all matching serial numbers. 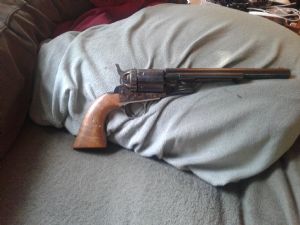 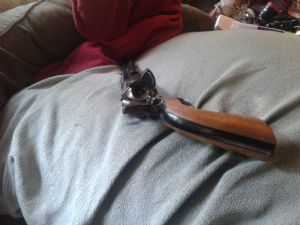 I like the LOOKS of the old cap & balls, but had one, once.
Am too lazy to do the loading.
Never got around to getting it converted to cartridge.

Don't have it any more.

However, for purposes of having a PHOTO taken, I've got a PLASTIC one which looks real enough, and a fellow name of Baker gave me one he had hand carved from wood, which also looks dang good. 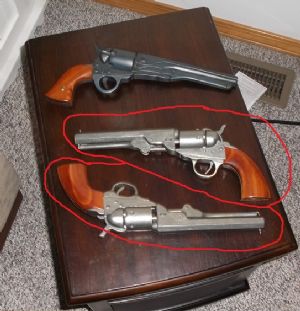 those are some beautiful pieces,,,, great job

Thanks, Terry. IMO, any percussion Colt, particularly the '51 Navy, are works of art.

I have my eye and a generation 1 Colt Single Action Army (near mint from photo) that is coming up for auction in the next few week ...... doubt that I can afford it though. I love those old Colts although I have many more Rugers than Colts. An old Civil War era Whitney Naval Revolver sold at auction yesterday for $450 ...... pretty rough but all there and all matching serial numbers.

I've thought having an original would be neat to have, not something necessarily to use (but I know of some that do), but the price they go for keeps me from it. Replicas are almost the same as the real deal and a 1/4 of the cost.

Ha, thanks. That's a nice one you have, too. I considered buying the Uberti replica of the '51 Richards-Mason (which are nice), but really building one is almost the same cost, if you sell the unused parts, which I did. Plus, I like tinkering, so I think I had more enjoyment with learning to build and work on it.

Course ya could name 2 young colts...

WV doesn't recognize black powder arms (flint/percussion rifles, shotguns, pistols, and revolvers) as "modern firearms," but as antiques. I got the cylinder and conversion ring (made by Howell Old West Conversions) from Midway as they were on sale. They can be found through a few dealers as well as directly from Howells. Conversion cylinders are considered parts, and aren't serialized. They can be shipped directly to your door (at least in most states, unless they're already installed in the gun). The only thing is that if you install the full conversion cylinder like I did, it's considered a modern firearm since the frame has been modified to accept cartridges and would have to be registered with the revolver's serial number if I decided to sell it (which I don't plan to as I just built it for myself as a hobby gun). The drop-in cylinders are also considered a part, but when put in the gun, it's no longer considered an antique arm, until you take it back out. And the cylinder has to be shipped either separately or out of the gun if you wanted to sell both together, otherwise it would have to go through an FFL.

The ejector rod housing is made by Kirst Konverters, and I bought it through Old South Firearms. They can be had from other dealers as well as from Kirst. They also make the conversion cylinders similar to what I got, but average about $75 more, and have a firing pin that's stapled in place and can't be removed if it wears or breaks, whereas the Howell version has a threaded bushing that holds it and the spring in place. The Howell version has to be mounted onto the rear of the frame with two screws, whereas the Kirst sits freely (but I've heard some having trouble with it wanting to bind against the cylinder). Both of those details are why I went with the Howell is cylinder.

The stock percussion revolver  itself was one I found from Taylor's and Co. through Wholesale Hunter. The 5" versions of the .36 Navies don't show up a lot, and thought it would be good for a conversion since I already have a standard 7 1/2" Navy that I wanted to leave in its original form.

Duuuuuuhhhh ..... didn't think about that Fig.  I guess since you asked the question I thought it did ..... without me thinking about it!

Sorry for the confusion.