Reissue Gibson Banjos - How Close to Their Prewar Models?

I donât know if this belongs here or the collectors forum...

Of the Gibson reissue banjos, which models were closest/truest to their prewar counterparts?

I realize tone rings are sourced and maybe tail pieces and/or tuners may be different?

I read an old thread that said if a reissue RB4 had been chrome plated, it would have been pretty much an exact replica.

In terms of construction, wood, inlay, plating, etc, which of the reissue Gibson banjos are closest to their prewar counterparts?

The Granada , RB-3 Wreath and RB-3 were the only ones I've played. They were pretty close. Modern techniques result in better details. Pre-war Gibson inlays were often pretty crude by today's CNC standards. Heel cuts today are done by machine whereas PW may have been a combination of machine-cut and trimming with chisels. Bindings and purflings today aren't always 100% accurateto the PW, but PW materials were often from different sources at different times, so....

Closest in looks or sound?

I think since the 1987 magic date, the Gibson reissues have at least "looked" the part. Granted, you can't get mahogany nowadays for resonator backs that looks just like pre-war mahogany. But if it's not too "stripey" I guess it's all right. Some of the walnut in the RB 4s and 5s is a little too aggressively burled, most of the pre-wars weren't quite THAT exotic. But again, pretty close. I think the marquetry and bindings have been darn good. The RB-5 used a whitish pearloid MOTS binding, when the pre-war was a translucent material "colored" or "shaded" by a yellowish wooden strip on the back of it. That was probably the biggest "miss". That and the RB 6s, most of which had the "wrong" engraving on the metal parts.

Rim dimensions and appearance -- pretty darn good! Tension hoop and flange? Pretty darn good I think. Necks have had the appropriate "heft". Peghead face veneers recently were often a black & brown ebony appearance, where the pre-wars were PAINTED black (like the bowties!)

For the most part, I think the gold plated models have had inferior, thin plating, that wears off way too fast.

All in all, pretty darn close! They all vary of course, just like the pre-wars. With the exception of the MOTS bound RB 5 and the off-catalog engrave RB 6, I wouldn't turn my nose up at any of them if in original condition.

I realize there are ESS, Blackjack and other models, while great banjos, not a prewar offering by Gibson.

Theyâre all very close, or close enough, considering the wide catalog variance in originals and number of late floor sweeps. The rb-3, rb-75 and Granada especially, top tensions also. Other models made minor compromises to originality or were latter day creations, but they all had substantial pre-war dna. My 3 almost could have come right out of the 30s.

The reissue RB 6's had a one piece flange, could or should have been a 2 piece. The RB 5's had a correct two piece flange, I believe.

Also, maybe could have offered an archtop tone ring, which maybe would have been more correct to the time period.

Otherwise, they are pretty well done, I think.

What about the 3's? Are there prewar 3's that used the kind of finish that is used in modern 3's? I have seen lots of prewar 3's (e.g. ball bearings, probably most/all from 20's which you may not be including in the term) with that red stain that rubs off. Did they begin to seal that in with nitro at some point?  I know I have seen 75's with finish more like the reissues.

It would be interesting to have an original thirties RB and a modern repro side-by-side on the bench, and measure everything to see just how similar they really are.

I know that when Martin's "Authentic" series first came out, there were several differences in the dimensions of the originals and the repros, such as the size and shape of the neck heel and bridge. I think that at least some of these differences have since been addressed.

Two differences that I can think of between the original pre-war banjos and the modern Gibson instruments are the glues used in construction, and the species of rosewood used for fingerboards. The originals were built with hot hide glue, and the old fingerboards were Brazilian rosewood rather than Indian rosewood. The sources of available wood supply have changed drastically since the 1930's.

Today's lacquers also differ in formula from what was commonly used in the 1930's.

It would be very difficult and expensive to build a true replica of a pre-war instrument today. Too much has changed-- available woods, manufacturing processes, chemical formulas, etc.

One thing I never liked as well about my current 1988 RB3 reissue is the figured peg head (doesn't really show up in the photos below).   It was mentioned in a post above the originals were not striped but solid painted (pear wood I believe). 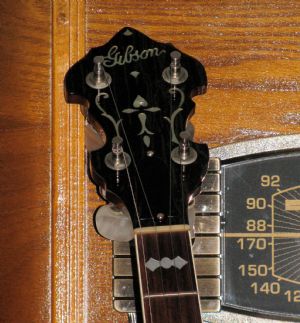 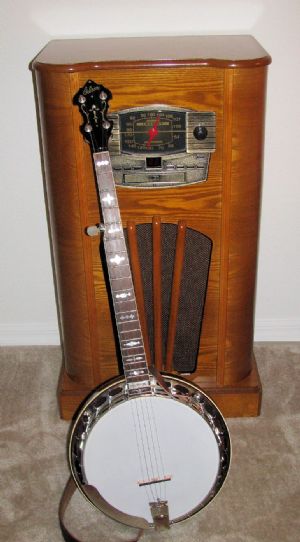 It's my understanding that pre-war Gibson fingerboards were only 1/8-inch thick.  Even my 1970s RB-250 appears to have a board that thin.

Do Gibson banjos from late 80s to 2009 have thin boards or something closer to 3/16 that seems to be prevalent post war among other makers?

I seem to recall an old article -- possibly in BNL -- that said fingerboard thickness was often a tell-tale sign of a post-war copy vs a pre-war original.

It was by Wyatt Fawley and appeared on John Grimm's Vintage Music website or maybe in a magazine if he published one. Either way, the article no longer links to Vintage Music, but at least it's still available.

As I said above, the tips are for telling original pre-war Gibsons from post-war copies, not legitimate post-war Gibsons.

Not all prewar OPF 4's were chrome, some were nickel plated. The prewar top-tension resonators had deeper resonator sidewalls than the Gibson reissues.

A contrary opinion: If you want prewar sound from a modern banjo, forget any of the Gibsons. Get a Huber.

I remember reading "somewhere" that pre-war fingerboards were 0.10" thick, a tenth of an inch, not one eighth. And the spaces for the inlays were cut all the way through the wood. What difference that might or might not make in sound I have no idea.

And you can bet the repros used different glue(s) and inlay filler. Probably different wood species. And so on. It can get to being way too obsessive about things that really don't matter. Listen to Russ Carson's YouTube posts. Mostly with either his Gold Star or Prucha. The point is he has excellent instruments, properly set up. Most importantly: He can play.

In many ways the re-issues and other modern copies were better than pre-war. Modern advancements in manufacturing, parts and materials, more consistency, and they (5 strings anyway) sold better. All kinds of little things like finish, binding, plating, metallurgy, wood, metal parts, were going to be a little different after 50+ years, with some reasonable alternatives and some real improvements. As always, specs were subject to change. They're still Mastertones.

When recorded by me on cheap recording gear they sound similar.....but the kick to the gut and the feel of a good prewar is hard/impossible to replicate......I've got several style 11's and a TB-3 mastertone cut rim conversion...

Of the modern builders I prefer Frank Neat's/ Sonny Osborne's Chief's, along with Hubers (owned RB3Wreath, Kalamazoo, Mills, Lexington, Lancaster) like the Mills and Lex the best.....and I did have a 1990 RB4 that was owned by Dana Cupp that was a great banjo as well....may good banjos

My current No 1 is not prewar but a 49 PB-150 that had the rim cut for a flathead tone ring with a 5 string neck made for me by Gary Price....I bought it at Intermountain Guitar and Banjo in the early 2000's and once built it was great and gets better every day....and Yes....I play it every day...