I have been wanting to get a nice “Pre-war” sounding Banjo. Been looking at the Huber VRB-3 in particular... I currently have an all original 1976 Gibson RB-250 with the 20 hole tone ring that I have for sale to fund buying the Huber... I was just thinking this morning, if I was to put the Huber tone ring in it, would it have the Pre-war sound of the newer Hubers? Also, is this something a novice luthier could do on their own? As an aside, is it just me or does the original tone ring look Pre-war?
Comments.? Thanks!
Doc in Florida 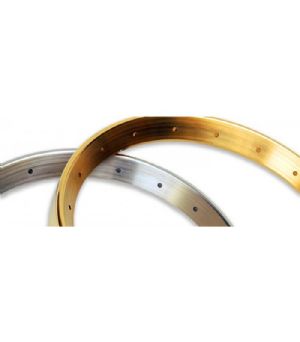 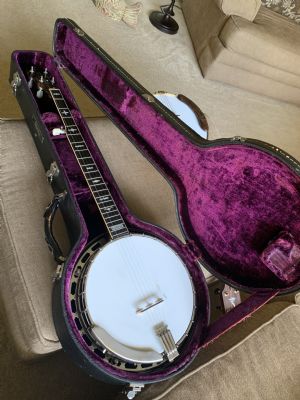 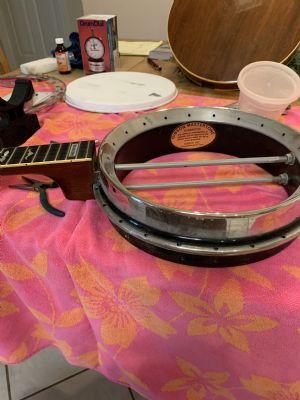 I had a parts banjo once that more than one person said had a pre-war tone. It did sound good. The fit of the Tennessee 20 on the pot was great. Never was crazy about the neck, anyway, it is worth a try. It is in that fit of the ring IMHO, now let the experts advise.

It seems to me that there are a few ways that you could approach this.

Swapping tone rings would be the least expensive way, but there is always the possibility that the new ring would not fit properly on the RB250. Also, there is no guarantee that you'll get the sound you're looking for.

Another approach would be to replace both the tone ring and the rim with a Huber ring and rim. If you did it that way, you could also consider changing to a one-piece flange.

You probably ought to call Steve Huber and discuss your options with him. I'm sure he would prefer to sell you a brand new Huber banjo, but I believe he also does customization work to accommodate customer's needs.

I own an original, pre-war, flat-head, RB3, and to my ear, the Huber banjos come closest to the pre-war sound. If I were you and could afford it, I'd sell the RB250 and buy a Huber with the HR-30 tone ring.

The 1970s Gibson Mastertones aren't known for the excellence of their rims...Probably an understatement. We constantly hear there are "a few" or "some" of these banjos that sound and play great though.

If you WANT to get into banjo tinkering, well there you go! Ask Steve Huber if he has a tone ring that fits your banjo. If so, go for it! It will cost you a few hundred dollars to do this. As Wayne said, you can also get a Huber rim to go with it. That will cost substantially more of course. You'll have to be sure to get the resonator tabs hardware put on the rim in the right spots for your resonator to fit.

Have you ever handled a Huber banjo? Even if you convert your Gibson, someday you're going to ponder how much better a Huber might look or feel in comparison. Huber's necks, resonators, inlays, bindings, frets, stain, finish, tuners etc are all THE BEST. Also your banjo is mahogany. Huber offers mahogany, maple and walnut, and different inlays.

If you do a nice job converting the Gibson, you can always sell it to fund a move up to a Huber. You probably won't get all your money back on the Gibson though.

Finally, you know there are TWO kinds of Huber rims and tone rings to choose from? The "vintage" (earlier) type, and the "engineered" rim and HR 30 tone ring. All things to consider.

New Hubers are expensive, used ones of course more affordable.

Go where your heart and wallet tell you.

"Is this something a novice luthier could do on their own?"

That's a judgement call. Unless the old tone ring comes off easily and the new one is an almost perfect fit, a novice will have problems. And there is a risk of cosmetic damage to the banjo. Of course, if you are the novice luthier and you don't mind making mistakes on your own instrument, have at it. But study the techniques and tools first. I generally feel that it is better for beginners work on cheap instruments before working on Gibsons or Martins.

"Does the original tone ring look pre-war?"
No.

With the 250 you are trying to turn a Sows ear into a silk purse.

Huber already took al the steps and his instruments are far superior in quality to anything Gibson ever put out after 1940 until GR came unto the scene.

Keep in mind, also, that if you need to shim or cut the rim to fit the Huber ring you will not be able to return the banjo to original condition if you decide to sell it and move on - which you almost certainly will, someday. The 250 will be worth more with the Huber ring but probably not enough to offset the new cost of the ring.

There seem to be people who want Gibsons of whatever vintage. The mid-70s were one of the quality nadirs of Gibson's banjo production, but chances are you will be able to find a buyer for an all-original RB-250 even if it has few redeeming qualities.

If you replace the tone ring and the banjo has a multi-ply rim typical of that era, you'll eventually want to replace the rim. If you replace the rim, you might as well step up to a one piece flange. Sooner or later you'll have a parts banjo with an original resonator, neck and tailpiece, and if you decide at that point to sell it and buy a Huber you probably won't get back your investment in the banjo and the upgraded parts.

My vote is, sell the 250 and shop for a banjo you'll like from the start, rather than rolling the dice on parts swaps for a banjo you're obviously not crazy about. Or buy the Huber and keep the 250 if you can afford it, and start experimenting on the Gibson while you have another banjo you like and can compare to the results of your experiments. You'll have a great banjo to play and another one to experiment on and learn about banjo construction.

Not close. Get the Huber. The only thing Hubers lack compared to pre-war Gibsonâs is age.

Agree with Mr. Rogers.
If you want the Huber, BUY the Huber.
You aren't going to "convert" the old RB-250 INTO "a Huber" by just changing the ring.
Sell it and get what you want.

I would sell the Gibson for what I could for it.
Huber's are fabulous.
There are a few other brands that are fabulous, Yates, Sullivan, Hatfield come to mind.
Some of the conversion Banjo's I am seeing look very promising.
I once had a Yates Skillethead, and that banjo was a dream. I sold it, only because I switched to playing 6-string banjo.
Ken Levan can make a great bluegrass banjo, though I've not played one. I do have 2 of his openbacks, and I love them both.
A lot of really good options available.

That's a pot with a one piece flange. The RB-250 neck won't fit, since it has been cut for a tube-and-plate flange…

I would not try to convert the RB-250. You can spend âgoodâ money in doing so and still not be satisfied. I think buying a Huber would be a wise decision. They are great banjos - Iâve had several. Of course, it is always recommended to play any banjo (if possible) before buying.

That's a pot with a one piece flange. The RB-250 neck won't fit, since it has been cut for a tube-and-plate flange…

If I remember right, it is fairly easy to add about 1/8" to the bottom of the neck heel or Sullivan sells both style rims.

I'd sell the 250 and buy the Huber, if a Huber is what you want. No point agonizing over it, because you will always have hat doubt in your mind.

This discussion reminds me of a line from a movie.
If memory serves, it was "Mulholland Falls" 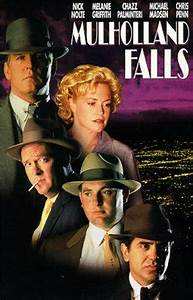 Well, whichever movie, had a plastic surgeon who was   changing the faces of ordinary women to look like movie stars.

"A hooker cut to look like Betty Grable is still a hooker."

So, a Gibson cut to fit a different tone ring, is just a cut Gibson, not a Huber.

Ask the Outhangers, and find if anybody within travel distance HAS a Huber that you can stop in and pick on.

And if it sounds like what you're listening for, scrimp and save and GET a Huber.

This discussion reminds me of a line from a movie.
If memory serves, it was "Mulholland Falls"

Well, whichever movie, had a plastic surgeon who was   changing the faces of ordinary women to look like movie stars.

"A hooker cut to look like Betty Grable is still a hooker."

So, a Gibson cut to fit a different tone ring, is just a cut Gibson, not a Huber.

Ask the Outhangers, and find if anybody within travel distance HAS a Huber that you can stop in and pick on.

And if it sounds like what you're listening for, scrimp and save and GET a Huber.

This time you got it wrong, Mike.

The movie was "L.A. Confidential," and the line was ,"A hooker cut to look like Lana Turner is still a hooker."

I do agree with the analogy, though.

Since I do not STAND when using this computer, I SIT corrected.

I could have gotten the name of the actress right, if I had cared enough to ask the Internet

On April 4, 1958, Stompanato was stabbed to death by Turner's teenage daughter Cheryl Crane at her mother's home in Beverly Hills, California. She claimed that Stompanato had been violently attacking her mother, so she stabbed him. A coroner's inquest returned a decision of justifiable homicide.

For some reason, I remembered the gangster's name.

But this morning was a BUSY morning, so I just took a wild stab at it, rather than look it up online..

I just made a pun without carefully PLANNING to!

Sometimes business is distracting and gets a person in trouble. Sometimes, though, it's just a lack of sufficient morning coffee. I've been so busy at times that I've locked keys in cars, forgotten to put gas in the tank, left parts out of repair projects, and other things that I've regretted. Many times I fail to do my research, too. At least in your case, this was nothing serious.

I only mentioned the small error because it is so infrequent in your comments. I meant it in fun, and maybe should have used one of those emoticons I don't like.

I do think that "Stompanado" is a much easier name to remember than "Turner," and being stabbed seals the memory like an oath sealed in blood.

if it was mine and i wanted to keep it,,, i would get cooperman to build you a 3 ply rim with hide glue and swap out the rims first. the rim is going to help the sound more then a tone ring on your rim. call them up and see,,, ask questions and you will get the lowdown from them.