Is there any type of difference to how a tension hoop is constructed? I personally prefer the classic notched type, but I've seen lots of variations, like the grooved hoop and a plain hoop with flattened hook that sits over it, often found on cheaper banjos, and of course, the top tension hoop.
But is there actually any difference or are they purely cosmetic, like just preference?

When it comes to brackets, does the bracket band have an effect on the sound or is it just to make disassemby/assembly easier?
I've never played a similar banjo to my own without a bracket band so I don't have anything to compare to. All I know is that it's made of nickel plated brass and makes the whole instrument look a lot better (in my opinion).

There are a number of differences in tension hoops that you mention, plus more. For instance, what they're made from. Some are plated brass, some are plated "pot metal" such as Zamac. Some are cast, some are made from a long strip of metal that is bent into shape and brazed together at the ends (like the thin cheap ones.

They probably do influence the sound of the banjo based on their WEIGHT/MASS, and the metal they are made from. Heavier meaning louder with more sustain. Brass/bronze being denser/heavier than pot metal.

Of course it's impossible to describe sound with words, and there's no standard for what's better or worse.

Not purely cosmetic. Probably the biggest driver as far as the original manufacturer was concerned, is what they COST. After that would be failure rate, particularly the early batches of pot metal hoops that Gibson used in 1929-30 that had a metallurgical flaw ("zinc pest") that caused them slowly, but literally disintegrate. Gibson probably had to do Warranty replacements on a bunch of those!!

In general, pot metal hoops don't have the structural integrity that brass/bronze hoops have (pot metal hoops warp, flare and "tulip" over long periods of time), but some believe they give the PREFERRED bluegrass tone.

The bracket band is not just cosmetic, and it doesn't make a banjo easier to disassemble (in fact, it probably makes it harder; most are a pretty tight fit). It was devised as a way to keep from putting holes in the rim for attaching the shoes. Holes in the rim can weaken the rim structure.

The bracket band does add some weight, and that weight will affect the sound to a certain extent.

I wish people would start making the scalloped hoops again. I love the aesthetic and it makes the banjo a little lighter. 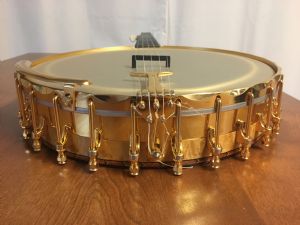 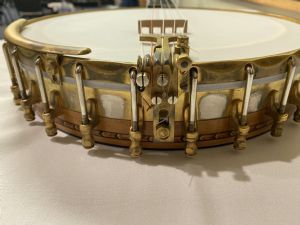 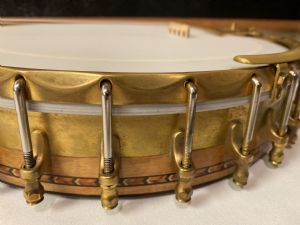 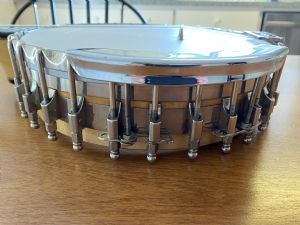 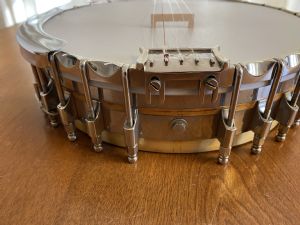 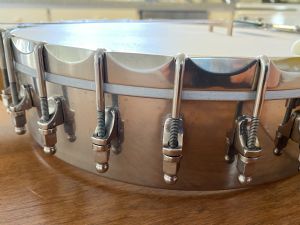 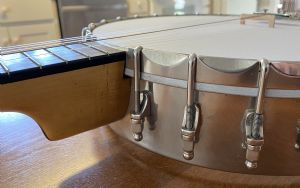 I wish people would start making the scalloped hoops again. I love the aesthetic and it makes the banjo a little lighter.

This is a variant I've never seen before, looks extremely unique

I believe the scalloping was designed to add "bling" in the form of extra facets to catch the light and add sparkle for stage performers. They were available from Clifford Essex and used by various UK banjo builders, Dallas, Windsor et al.

I believe the scalloping was designed to add "bling" in the form of extra facets to catch the light and add sparkle for stage performers. They were available from Clifford Essex and used by various UK banjo builders, Dallas, Windsor et al.

I believe you're right about that, and they are very cool-looking.

'Billy in the Lowground' 30 min

'Recommended listening for a newbie' 1 hr