TOTW Glory in the Meetinghouse

The tune of the week for this week is Glory in the Meetinghouse. It was a TOTW at least once before - the last time I can find was in 2011: banjohangout.org/archive/221467

The first version of the tune I heard was in this really wonderful and clear rendition by Michael Neverisky (a member here, I believe): youtube.com/watch?v=YFhl8Cg3sHo

The tune itself apparently comes from Kentucky fiddler Luther Strong, who recorded it for the Library of Congress in 1937:

The tune is in E minor (the relative minor to G major). I havenât found much biographical information on Luther Strong himself, and Iâm a bit limited in my access to resources as Iâm traveling at the moment. He apparently was from Perry County in eastern Kentucky and lived from 1892 to 1962. The best information I can find is in the detail on the tune in the Traditional Tune Archive:

Michael Neverisky credits his version to Adam Hurt, whoâs recorded the tune before as a medley with Cousin Sally Brown on his 2009 CD, Perspectives. You can find a number of videos of Adam playing it on YouTube, including these:

I have also worked on âGloryâ with Adam and learned the version he taught to Michael, using gEADE tuning. Adam has a standard A and B part, but he also has a third part that can either function as an alternate A or as a separate C part. Itâs more jam-friendly to treat the third part as an alternate A but played solo I prefer to treat it as a C part.

Iâm sure there are lots of other good renditions of this tune but I particularly like the one recorded by Laurel Premo and Cameron DeWhitt for Cameronâs podcast. The whole episode is worth a listen, but hereâs a link to the tune directly:

Laurel is using a fiddle thatâs tuned low - I havenât checked it with a tuner so Iâm not sure where she actually has it.

Enjoy, and stay safe everyone!

Art Stamper used to retune his fiddle for this one, as well.

A wonderfully evocative E minor tune. I love Luther Strong's rendition which is as raw and plaintive as they come.

Posted a quick, rough take, bugs, wind, and all. I'm nowhere near as clean as Michael Neverisky and I decided not to try the third part... 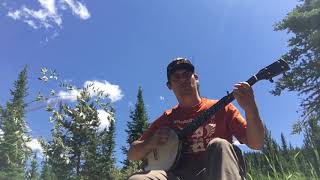 VIDEO: Glory in the Meetinghouse (rough)
(click to view)

A perfect tune to revisit, Mark, and nicely played. Recently I was inspired to work on it again after watching Dan Gellert perform in Mountain Minor, a 2018 musical and historical drama of a family's story in Kentucky and Ohio during the Great Depression. The movie is available free if you have amazon prime.

Stephen Wade covers the life of Luther Strong (1892 - 1962) in his book The Beautiful Music All Around Us more thoroughly than in any other source I've found. Luther's life was challenging with regard to supporting a family, moving often, having multiple jobs, having a bad alcohol problem affecting his family life, moonshining, brawling, and landing in jail. In fact, Alan Lomax sought him and found him in jail and recorded him not long afterward. Luther wasn't the only fiddler playing Glory in the Meeting House, but his version is said to have been the most influential and, in fact, won him prize money at fiddle contests ($500 one time, claimed Luther).

I use an unusual tuning -- eEGBD -- to get the notes and play it in the same key, Em, as the original recording. The tab here has some changed fingers than what I play in the video (I just discovered them today). 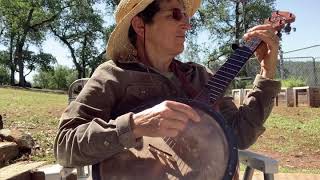 VIDEO: Glory in the Meeting House (TOTW)
(click to view)

Glory in the Meetinghouse

Oh that tune was made for the moody sounds of that big bassy cello banjo Janet. Sounds lovely played on that!