Does this damage seem cosmetic or more severe ?

Please take a look at. this link banjobuyer.com/banjo/81029 . I am looking to buy but would hate for it to be something a luthier couldn't touch up.

Barely cosmetic.....buy it and start pickin' it. Don't pay someone to "repair" that.

Just a surface scratch. It would be easy to repair, but that's not essential. It will be unseen by others when you play. The sound wouldn't be effected at all, if that's all that is wrong. The Eagle 2 resonator model has a list price now of $2800 on the Deering web site, so $1600 is a good discount, again if nothing else is wrong.

I don't know your level of experience, but be aware that the Eagle 2 is not designed like a Mastertone style banjo. It uses bracket shoes that are screwed into the rim to hold the flange and resonator on the banjo. Not a bad thing, just different from most other Bluegrass banjos that are clones of the Mastertone style.

Really appreciate your response. I learned on a goodtime 2, and loved it.I switched to a a rk 75 elite and really hated the neck/scale length. I don't play a lot of bluegrass out side of learning tunes for practice. I play pick less folk/ melodic stuff.

Normal wear and tear. Don't worry. But don't pay a "mint" price for it. Might be a good price negotiation point.

$1600 for a banjo currently selling new at $2600 is a great price. I've recommended this banjo in two different discussions.

All the finish flaws are purely cosmetic. The chips on the heel and along the fret board can be drop-filled with super glue.

Here's one video showing how.

I think the finish on Deering banjos is a polyurethane instead of lacquer, which makes CA glue a good fix.

Here's Dan Erlewine's take on this kin of repair.

Lincoln Hensley's picture of the back of Sonny's banjo

Minor scratches and blemishes are what some of us refer to as "character".

Purely cosmetic. If you get it I recommend just leaving the chips as is. The resonator scratch may come out with just some buffing compound. Still a great  banjo! I would personally just buy it as is and just play it

As for more details on the chips; They're borderline too large for the CA glue trick in my opinion...but it could be done.

It would likely cost at least $150-$250 to make it look like new. Which for something purely cosmetic is a lot of money.
I don't like taking the middle ground of "Looks better, but not new" because it makes it look like it was repaired by an unskilled person. To me, most halfway "looks better" repair jobs make it it look worse then accepting the patina of a well used life.

I don't like taking the middle ground of "Looks better, but not new" because it makes it look like it was repaired by an unskilled person. To me, most halfway "looks better" repair jobs make it it look worse then accepting the patina of a well used life.

But I think finish serves a protective purpose, mainly keeping out dirt, and moisture as well as oils and sweat from our hands. Absence of finish to me says absence of protection.

It's a given that many finish repairs can't be invisible. The right way to repair the neck finish might be to fill the chips and over-spray the whole thing. Expensive, as you say. And probably outside Kernolium's skills, since he's asking if the blemishes are purely cosmetic.

Outside my skills, too. I'm not good at spray. I would try a drop-fill if doing it myself. As to some chips being too large for the super glue method, Stew-Mac sells two levels of thicker brush-on super glue that I'd be inclined to try.  I know of one repair person in my region who keeps a batch of thickened lacquer for drop-fills on all types of finishes.

If the original Deering finish in question were lacquer -- which I don't think it is -- new lacquer would melt in and be invisible if done well. 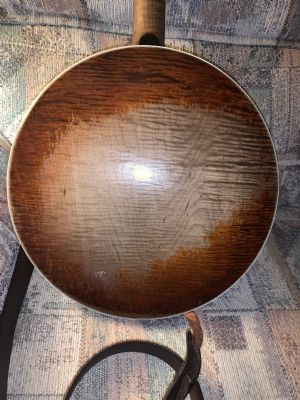 I'm a banjo luthier, buy it the repairs are dead easy.

'All Banjo Straps Are Not Same' 1 hr