I've got a friend that's looking to purchase this banjo. Looking for any info you might have, so he can get a good trade value for it! These are the only 2 images I have. Thanks so much for your time! 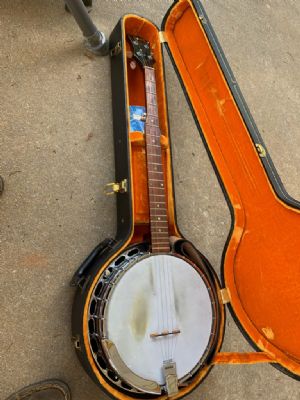 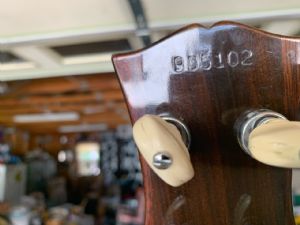 It appears to be a Gibson RB 100. Probably from the mid 1960s. Presuming it's all original, nothing broken or half-assed repaired, these can be worth $1000-$1500. The hard case is a nice addition. If that serial # were quite a bit lower, it might be worth a bit more to some who would like to install a Mastertone tone ring in it -- making it a "stealth" Mastertone because it would lack all the fancier decorations of a Mastertone model. About 1964 Gibson reduced the thickness/quality of the wooden rim inside the banjo. The thicker, earlier rims make the best conversions to Mastertones. The later/thinner rims, not so prized for that purpose, so they sell for the price range I indicated. The earlier, thicker rimmed ones might fetch a premium price.

I started out learning banjo on an RB 100 made about 1963, when I was 11 years old. They are very well made banjos. Their only "drawbacks" were lack of a Mastertone tone ring, and lack of more decoration. That made them the "entry level" resonator banjo in the Gibson line up. Like many many others, once I learned to play a little bit on the RB 100, I traded up for an RB 250 Mastertone model. The RB 100 is a GREAT banjo to learn to play bluegrass on.

I wish your friend good luck getting it at a good price.