Just tapping into the knowledge and experience well here regarding Vega vintage models. In particular, can anyone tell me if the Whyte Laydie and Tubaphone tone rings are interchangeable between the different Vega pots / models? In other words, can a banjo originally made and sold as a Whyte Laydie (eg. R model), be refitted with a Tubaphone tone ring without modification....or vice-versa? And where would a Little Wonder sit in this scenario?

Advice, as always, much valued!

The rings' profiles are different. Though I do not have a Whyte Laydie ring, I have a Tubaphone and I cannot imagine that they are interchangeable without having to alter the pot. What's more, I'd advise any against taking any wood away from an old Vega.

They are not interchangeable. Stew Mac used to publish a very nice diagram showing how rims were turned for each type of tone ring to fit.

This link shows their Whyte Laydie pot diagram.  I couldn't find the diagram they used to show for Tu Ba Phones.  Maybe that has been dropped from the catalog?  Maybe someone else can find it and post it here.

Many thanks for the great advice....two banjos then??!

A Little Wonder is another rim too. Simpler cut than Whyte Laydie or Tu Ba Phone.

The little wonder is way different, using shoes bolted through the rim instead of the bracket band of the Whyte Laydie and Tu-Ba-Phone. 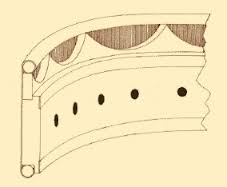 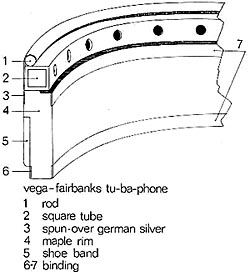 The great diagrams above show pretty well the differences (using an Electric as the example, with a full spin rim), but most Whyte Laydies have much less of the tone ring visible. On a couple that come to hand a WL (c. 1906) has 1/2" to the head with 2 inches of rim seen, while a TuBaPhone c.1913 has a bit over 3/4" from the top of the wood to the head, with 1 3/4" of wood. so the depth of the pot is about the same, but the tone ring visual exposure is 50% greater (a quarter inch) on the Tubaphone. You would need to both add and remove wood to switch either direction. Both are great banjos, so don't even think about modifying either. With a Little Wonder/Regent you would "only" need to remove wood, but these are fine instruments as well. I believe the rod and spun part of each of these is the same, but the other part (or lack of another part in the case of the LW ) is quite different. Having said that I did see one fairly early Whyte Laydie which was sent back to the factory for a TuBaPhone conversion, probably in the teens, and was double stamped, with the original WL stamp on one side if the strut, and the new TuBaPhone brand on the other. Don't try this unless you can get to the factory before 1915. Visually the proportions are quite different, but trying a switch would show even greater differences.

'Another overlooked topic here (that does not bother me) but still....' 29 min