Anybody have any thoughts on what the advantage wound be (if any) for a solid wood poplar resonator?.....I just built one, carved it oval and flat inside, like a top-tension resonator.....Maple side wall with mahogany veneer on the side and back.....Just curious if anyone has ever done anything like this before.....Turned out really nice with concentric rings like a style-3 or style-75.........I haven't finished it nor tried it on a banjo yet......

I would think it'd be noticeably lighter, just from past experience handling poplar. Though the weight of the resonator is kind of a drop in the bucket.

I haven't done a resonator like that yet no one has, Clancy,

I have Poplar here for rims and necks, Great necks, fine lightweight rims, but they are mine, so I recuse myself.

And the Green stripes.

Great luck to you . Clancy of the Mullins people, Is Shawn Mullins one of your clan? He's a Nashville songwriter.

I find it interesting. Have you put any kind of stain/finish on it ?
Yes or no, I think you should put it on a banjo and give it a test drive.

Poplar is the normal wood for laminating resonators, and there is only a thin veneer of some other wood on the outer surface, so most resonators are essentially poplar.

No reason why you couldn't just have the finished surface be poplar as well.

But it's becoming more and more poplar every day.

But, would it wear as well as Iron wood.

On fender bass guitars, poplar is often chosen by players for it's "pop"-a hollowish lively/soft staccato sound and feel. Harder body woods like ash give a very solid, cut through anything/longer decay. Even solid body basses and guitars are quite evident in this difference.

Besides the light weight of poplar resonators (and costs) I think it probably offers a bit more "pop" and response there as well.

If thatâs the case, I seem to recall reading about how they can âBoatâ - Warping and causing them to take the shape of a boat.

If that’s the case, I seem to recall reading about how they can “Boat” - Warping and causing them to take the shape of a boat.

What kind of boat?

Sorry. (Well, a little bit.)  It was just all those poplar cracks.

If that’s the case, I seem to recall reading about how they can “Boat” - Warping and causing them to take the shape of a boat.

The OP didn't say whether they were making a one-piece, 2-piece bookmatch, or pizza-wedge type.  Poplar isn't the world's most stable wood (despite its poplarity).

If you live in a climate with seasonal humidity fluctuations, the bookmatch or one-piece will expand amd contract more across it's width than along its length, and the rim will try to stop it, so the resonator will take the shape of a boat during some seasons, and be flat during others.

The picture below is cherry, and quarter sawn, which moves less, to boot—more stable than poplar, but it goes boaty anyway.

If you go the pie wedge route, it won't boat, but the individual pieces will shrink and expand nonetheless—you can't stop that other than by keeping the wood in a climate controlled environment.

Here's a poplar solid wood wedged blank I had to abandon—it took it a few weeks to do this, and as you can see, part of the breakage is on the glue joint, part is the wood itself—it tears itself apart and it can do this once the resonator has been assembled and finished. 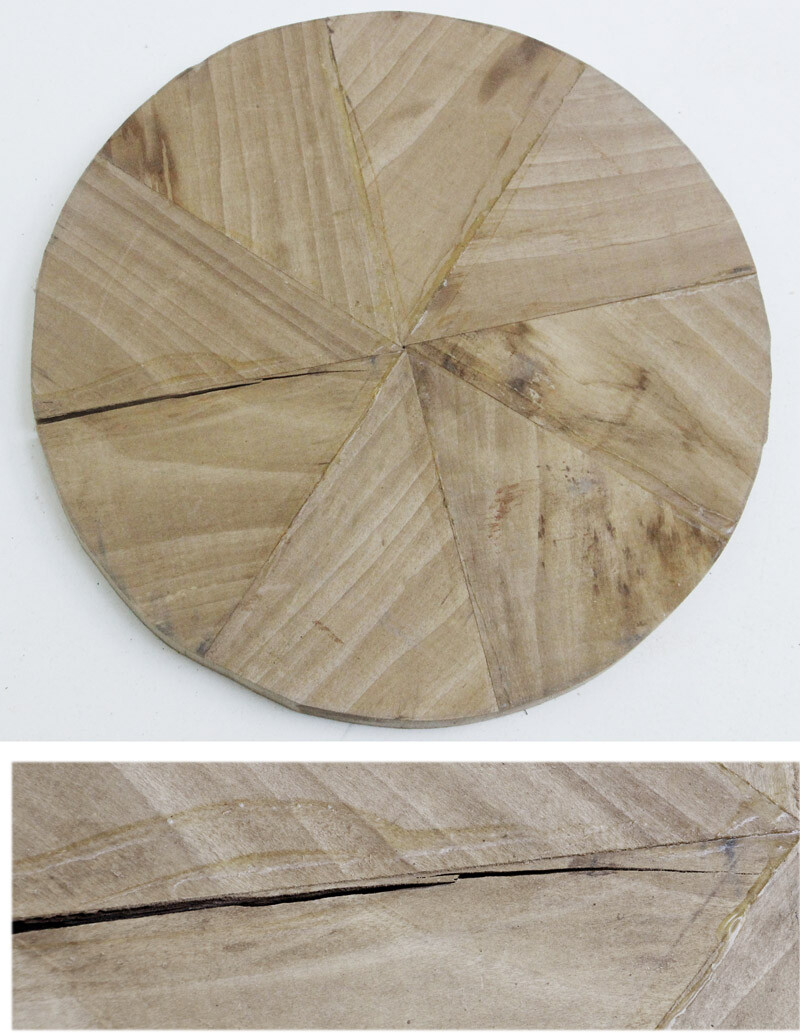 It's not hard to understand why after trying numerous variations over the years, including cross-grain spruce in the center of the inside, I just gave it up and now laminate them (although, from poplar).

'Elisabeth Cotten and the banjo' 19 min

'The descendents of those that fell ' 2 hrs