Please have a look: banjohangout.org/classified/81803

Dang, I would have made you an offer if I had not just blown through my banjo budget for the next two years on a Van Eps!

While the banjo itself is a pretty typical private label R&L banjo, it has the full Dennis E. Hartnett treatment... tonebar & soft pedal mute. It is only missing the "adjustable arm rest"-- luckily for the next owner of this banjo replicas of Hartnett armrests are available from Smakula Music.

I am a fan of those tonebars. I have a few of them and go back and forth on using them. I might put one on a banjo this evening for fun.

It is a shame that it has wire strings.

Joel, Thank you kindly for the response. Those wire strings have been on the banjo since I bought it in 2006 and stuck it away with all the others. I never tuned it up or played it (like many of the others acquired when I had The Folk Shop). There is no wear on the frets, so somebody else didn't play it. Per your disappointments, I will string it nylon an add a Smacula armrest. Thanks for the advice. Much appreciated. Paul

D. E. Hartnett was an interesting guy. He lead the Guild of Banjoists, Mandolinists, and Guitarists for a term.

He made and sold all kinds if inventions. Some of the strange stuff included a sawhorse shaped bridge and his "developer mute".

He came up with this scheme for teaching. The idea was that the student would clamp on their developer mutes and learn a new piece of music without hearing it. The full package would include two mutes (one on the bridge, one on the strings near the neck, and clamping the lever mute down. This would make the banjo just about silent.

After the student learned the piece (reading sheet music, as was the standard of the time) they would remove the mutes and hear the music for the first time complete.

These small banjos were intended to be pitched to D. That is, one full step above C (which is now called dropsy... I mean "drop-C"). The idea was that they were more brilliant and sharp in tone and carrying power.

So, in a way this is the closest classic era equivalent to the modern "A scale" that there is. Seeing how "A scale" banjos are so popular today this one should go quick.

I'll see if I can take a picture of his Developer mute tomorrow and post it. Honestly, it is the best practice mute that was ever made (and I have collected just about all of them). I wish they were still available, I'd buy half a dozen.

Again, this is a cool banjo and I wish I had the funds to get it just because I am a fan of Hartnett. I hope whoever buys this will play it "classic style" and post videos. 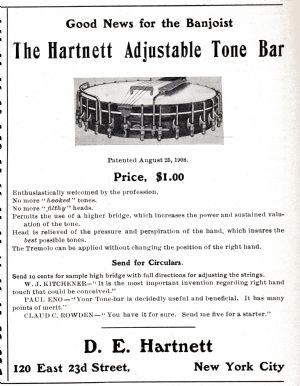 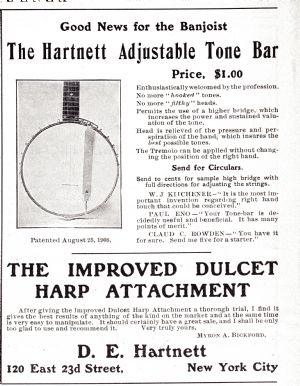 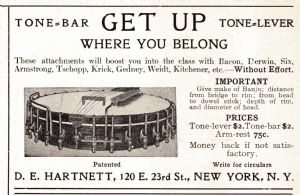 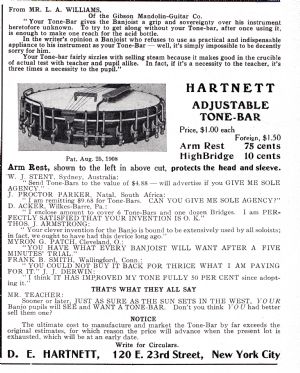 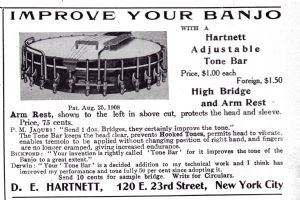 Good stuff, Joel. Sounds like Mr. Hartnett was definitely 'into it'. Paul

Here is a Hartnett âDeveloperâ mute. The roller is sort is squishy rubber canvas tubing. 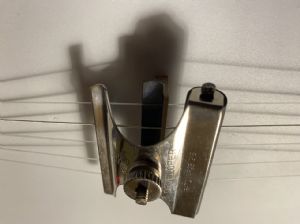 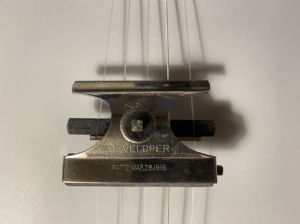 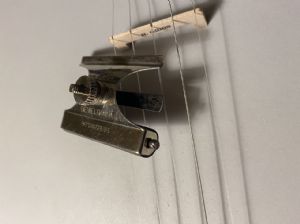 Joel, that banjo is calling your name.

Joel, that banjo is calling your name.

You must have missed where I wrote that I just bought a Van Eps banjo (one of "THE" Van Eps banjos).  I'm broke.