Once more: Gibson or parts banjo???

A regular question, I know. This one, probably an amazing banjo. Conversion, definitely. Gibson though, hmmm...

Oh, not mine - I live quite a ways from there

Out of focus pictures are better than no pictures at all, but . . .

The rim and resonator do appear to be pre-war parts. According to the text, everything else has been changed. The text specifies a Huber tone ring, but the pictures aren't clear enough to discern whether a tone ring is present or not.

This banjo most likely started out as a tenor with a "Coke bottle" head and a hex flange, similar to the version of style 1 that beegee was asking about in another thread. Like so many other style 1's, it has been heavily modified, with the wooden rim and resonator being the only pre-war parts remaining; and the rim being re-cut to accommodate a one piece flange.


I think I'll coin a couple of new terms:  I'll call this either an "ex-Gibson banjo" or a "banjo formerly known as Gibson."

With a pre war rim and resonator, you have the basis for a potentially good sounding banjo. To me, that is where the sound is. I did two like this several years ago and played them for a while. One was pretty good and the other was mediocre. Neither was near this kind of money, but I did everything myself, outside of the lathe work.

The conversion may be from unused to useful??

Bart, I hope you don't mind me hijacking your thread, but I figure I'll add another to the pile.

I've seen this one listed for some time now. I may be wrong, but it looks to me to be an original KK tenor neck bolted to an Asian import pot.

Hobbes posed a question about the Ship of Theseus. I will juxtapose it here: If someone took the original tenor neck and all the original shoes and bolts and built a reproduction TB-1 with otherwise new furniture, could it be called a pre-war Gibson banjo?If left with the original rim intact, with the simple addition of a neck, I would call it a TB-1 5-string conversion, a simple accessory swap. Add the tone ring, it no longer complies to the catalog model description of a style 1. So...

If you drop a classic T-Bird body on a Chrysler Hemi chassis...is it a For or Chrysler?

At least the seller is up front about all the new parts. I'll give her that.

This is exactly the type of not-deserving-to-be-called-a-conversion banjo that I described in the other current discussion that asked where do we draw the line on what qualifies as a "pre-war Gibson banjo."

Here we have a pre-war rim and resonator from a sub-Mastertone model. Everything else is post-war and downright modern. The rim has been modified (converted?) from shoes to one-piece-flange. But with nothing else in the pot remaining from the original instrument, the banjo itself is not a conversion.  It's just a parts banjo in which two of the parts are pre-war Gibson.

Even with the pricey Hatfield neck and Huber Vintage tone ring, I believe $2700(US) is high for a parts banjo.

Hobbes posed a question about the Ship of Theseus. I will juxtapose it here: If someone took the original tenor neck and all the original shoes and bolts and built a reproduction TB-1 with otherwise new furniture, could it be called a pre-war Gibson banjo?

Most owners and all sellers would definitely call that a pre-war Gibson banjo.

Heck, buy an Oriole or Kalamazoo rim and resonator set for not much money (or spring for genuine Gibson with a label), and pass it  off as a "period-correct pre-war Gibson restoration banjo."

Parts banjo. Not a Gibson.

I almost find something distasteful about taking the butchered remains of a TB-1/TB-2 and trying to make an RB-75 out of it. Why even bother keeping the reso, when it clearly doesn't match the style of the new neck and hardware?

Now if they had done this instead.... 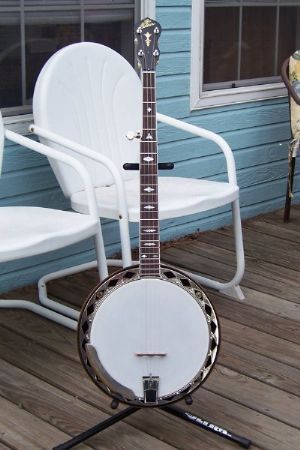 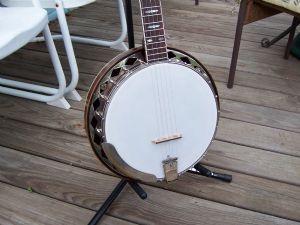 Closer view of the pot

Man, why bother? A sub Mastertone rim drilled full of shoe/bolt holes? The outside TURNED for a one piece flange to fit?

One might think this owner lived in a place where not one single good quality tone ring banjo ever was available. The ONLY thing available was this FREE old Gibson sub Mastertone body, and mail order parts, and a friend with a lathe.

I would assign ZERO value for the "Gibson" original parts. It's worth at most what the person who converted it paid for the new parts, and probably LESS. The whole is not even the sum of the parts.

Hey Bart..Arthur Hatfield was doing quite a few of these banjos..using a bracket rim out of old Gibsons. Some great sounding banjos but honestly, and with all due respect to the seller and their fine instrument..nothing that should be called a Gibson conversion by any stretch of the imagination. Saying that, some of these were barn burners!!!

I have a 1930 TB-1 conversion. Hatfield neck, Blaylock ring. The only original parts are the resonator, rim, co-rod ,and one reso screw. It has the “Mastertone” block on the neck, which could be up for debate. I just wanted a piece of an old Gibson and I paid a good buck for that. It’s the best-sounding banjo I’ve ever had or played, which for me is where the rubber meets the road.

I wonder where one of these conversations would go if somebody took a bare bones Vega style F tenor banjo rim, turned it to accept a modern bracket band and reproduction Whyte Laydie tone ring, refinished the altered pot, added the necessary reproduction hardware, and fitted a reproduction neck to it. Except for the lack of a resonator, it's the same thing as re-doing a TB-1 such as the one described above, complete with the dilemma of what to do with the now vacant holes for the shoes.

Think of it: Pre-war Vega Whyte Laydie #2 conversion banjo . . . Stick a gryphon in the peghead [you could even do it with an Eastman neck] and call it a Fairbanks/Vega W.L. #2 conversion and double the price . . .

I'd better stop before anyone gets any ideas . . .

I wonder where one of these conversations would go if somebody took a bare bones Vega style F tenor banjo rim, turned it to accept a modern bracket band and reproduction Whyte Laydie tone ring

I'd better stop before anyone gets any ideas . . .

Too late,I bought an old plectrum parts banjo which had a 1924 white lady pot that had been converted to coordinator rods. I put a $50 Saga neck on so I could play it and found I really liked the tone.

Now I've found a 1964 Vega Ranger with resonator,a nice clean one. I'm gonna give the Ranger a heart transplant with the old white lady pot. It'll still be all Vega,with a prewar pot. ;)

I notice I've drifted far off the original topic. I've had 2 or 3 shoe bracket parts banjos over the years but nowadays I like to just hang a 5 string neck on the original shoe bracket pot. I have 2 right now and both sound really good.

I suppose someone could take the cast-off parts of the banjo that started this thread - the neck, shoes, brackets, tension hoop, tailpiece, etc. - and graft them onto a modern rim and resonator. Would that banjo not be just as much of a pre-war Gibson conversion as this RB-1/75? Or split up the rim and resonator, each of which should have the serial number, and build two pre-war Gibsons with the same number? Maybe each bracket could go onto a different banjo. How many pre-war Gibson conversions could you make out of one original banjo?

My first two banjos were a Sears Silvertone built by Kay, and a Gibson TB-11. When I had the -11 converted to a five-string with a tone ring, I took the brass hoop that came out of it and put it in the Silvertone. Did I unwittingly make one Gibson banjo into two Gibson conversion banjos? I still have the Silvertone, if anyone is looking for a really cheap Gibson.

You could call the Silvertone a "Gibson Part [be sure to keep it singular] Banjo."

Very interesting. Just acquired one very similar to this, an old 1926 style 1 bracket shoe that's been frankensteined into a modern five-string. It even has the holes in the rim plugged, plus new hardware. Only the rim and resonator remain, and the rim has been heavily modified. I just mostly refer to it as "a style 1 conversion with 'x' neck and 'x' ring."

To throw another monkey wrench into things, the neck was crafted from an old piece of prewar walnut (early 40's), so technically the rim, resonator, and neck are all 'prewar", just not all made in the old Gibson factory.

Two points to make in tying this to the OP:

1. I didn't pay near the amount as the banjo in question.

2. Mine sounds as good or better than any banjo I've owned before. This should make an excellent bluegrass banjo for someone down the road.

Sorry for the double-post, but here's a brief video I just posted of my style 1 conversion mentioned above. There is a lot of sound potential for these heavily modified rim and resonator combos. I don't know if I got lucky or what, but if someone could potentially talk the seller in the OP down in price, they could have a heck of a five.

Sorry for the double-post, but here's a brief video I just posted of my style 1 conversion mentioned above. There is a lot of sound potential for these heavily modified rim and resonator combos. I don't know if I got lucky or what, but if someone could potentially talk the seller in the OP down in price, they could have a heck of a five. 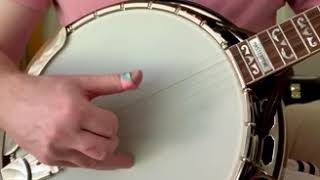 Why create now classifications? The Classified Adds label anything Gibson like as a Gibson Copy. This would mean that original = original. Any other change would be a Gibson copy. My guess is Gibson Copy doesn't sound expensive. Hence, everywhere else sellers say anything.

Why create now classifications? The Classified Adds label anything Gibson like as a Gibson Copy. This would mean that original = original. Any other change would be a Gibson copy. My guess is Gibson Copy doesn't sound expensive. Hence, everywhere else sellers say anything.

In your definition, would a totally original pot with a replacement neck be a Gibson Copy? That sounds a little too far in the other direction.

Change is just that. The original is gone.

The TB becoming an RB is copying an RB. That is the transformation into an RB. The only time when change is ignored is at the point of sale. Then the change is considered original.

Happens very frequently. This thread questioned every change to devalue it.

The other time is when you are famous and the how famous. Then and only then a market must exist. As I watch videos of BanjoThon, original RB banjos are low in number and fixed. Gibson didnât sell many.

Please make the case that they are so special to be called?

A couple weeks ago there was a Gibson RB 100 in the Classifieds. Early 50s,I believe it said.
after carefully reading the ad,I realized it had ONE Gibson part on the WHOLE BANJO! The neck. :)