I was going through my aunt's things and recovered a near mint 2950s-1960s Stella parlor size guitar. Yea, an old cheapie with zillions produced but I think this will be a fun acoustic blues retro sound guitar, playing with a slide. I am considering nickel strings of say, 54-12 ish gauges. Not worried about the low end or the high end, cause with this Guitar it just isn't there. I would likely use an open D tuning?
Trouble is I haven't found nickel strings yet in this range of gauges. What do you say? Brad

Some early guitars were not designed for steel strings so this is a difficult question w/o having a good guitar luthier examine the guitar .
I've found light gauge silk-n-steel to be the least damaging to try on this type of guitar --- emphasis on "try" . If the top &/or bridge is already pulled up , forget the steel strings & hang it on the wall .

That's a good place to start.  They may be a little light, but it's a Stella, and they were built with spit and chewing gum.

If you don't have a local music store, I can mail you a couple of bronze 53's or 54's [depending on what I find in the extra string box].

If it's a Stella, make sure it's not falling apart before you string it up.

Those old Harmonys are tough guitars...all the old bluesmen played one at one time or another...and they didnât baby them.

I use a light set of Dâaddario Phospher Bronze strings on mine...sound and feel great.

Good luck and have fun.

I put a set of D's on a couple of days ago. Kept them a bit light, since there is not a lot of bottom or top anyway. I used nickel 54's to 12's. Right now, I am letting the strings break in at regular guitar tuning. Later I will drop to open D tuning and mess with a slide. Brad

My dad picked one up at an estate sale for a few bucks a while back (H929). It was missing the tuning pegs on one side, but the bridge (missing the insert) was still rattling around inside.  Looked like it had been out of service for a long time.

He doesn't play, but he said it was just like the one his room-mate had in college (early 60s).  Apparently the room-mate had an expensive Gibson guitar, but when he was ready to throw down and really bang out the rockabilly tunes he preferred the Stella?  Preferred not beating up the Gibson during the late night college antics maybe?   Seemed to bring back fond memories for dad.

He kept it sitting in his tv room for about a year, So I decided If he liked it that much I should get it playable. Put tuners on it and a set of Ernie Ball Earthwood extra light strings.  Action is pretty good, didn't need to take anything off the bridge. It's surprisingly loud with a kinda bluesy twang. 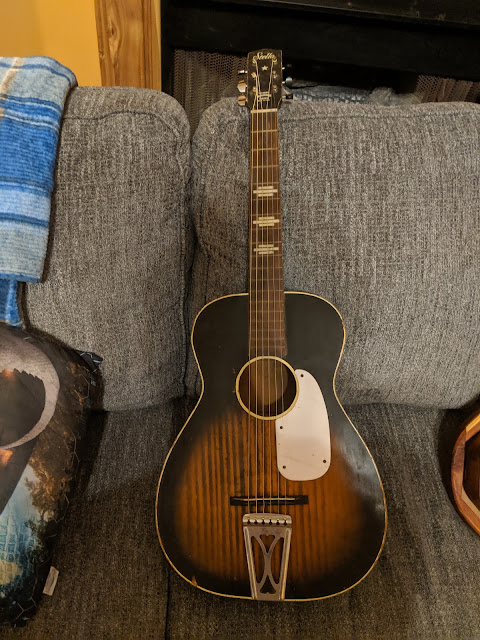 Took it back too him and he seemed proud of it.   I couple of weeks later he gave it to my son (who does play and has multiple guitars), so now its back at my house.   Go figure.

Steve, mine looks like your but with no pickguard. I am becoming attached. Brad

I switched to silk & steel for the 1929 Martin 2-17 and it just popped - it brought out the best tone yet. The neck doesn't have a rod, so a very light gauge is necessary. I put silk & steel strings on other guitars and they sounded better, too. Not sure how s&s strings would work for slide - I'll have to go downstairs and try. 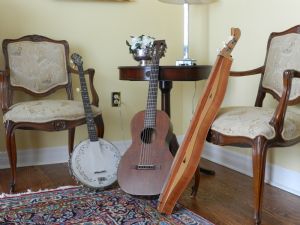 The first guitar we had around the house when I was a kid was a Stella like that. It is a wonder my brother and I ever learned to play anything at all. Thank God for the invasion of playable low-end Japanese guitars!

The shape and design has been revived in recent years, but with glued bridges, better bracing, and quality materials. I still don't want one, though.

Thought some of you might be interested in this early steel string guitar imported from Italy in1910 .

I found this locally in the early 70's in need of some pearl repair which I cut & installed & felt more comfortable using silk & steel strings due to its long scale . The import company , O Pagani & Son was still in business at that time on Bleeker st. NYC although not importing any more of these guitars & answered my inquiry with a nice letter & copy of the page of their 1915 catalogue showing the guitar . Later , another guitar collector , R Vitali in Ca., assured me the guitar was imported in 1910 .
The guitars relevance to Fredric Martin & Co. located at the time in NYC , due to its dating , size , & the D1 on the label inside , does initiate the possibility it could have influenced the early 0000 Ditson guitars by Martin which led to their dreadnoughts . Whatever happened back then is unknown however these Pagani guitars advertised as "the largest existing guitars" did precede the large Martin design .

It is nicely portrayed in Tom Wheeler's hard cover book , "America's Guitars" despite its importation . 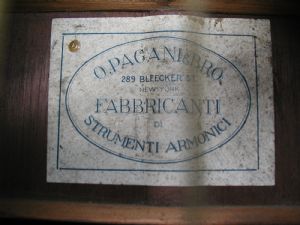 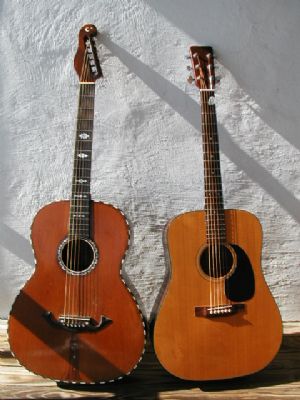 Bob, those are good looking, for sure. brad

So I tuned my Stella to Open D to mess around with slide playing. Now that I have been playing on it a while, I started hearing a bit of tone change. Upon inspecting the guitar, I noticed the back is becoming unglued along a several inch portion. I will watch it a while to see if it continues to part. then decide to re-glue entire back, repair/glue a portion of it, or just hang it on the wall.
Brad

Give it the JJ Cale modification

Charles, I think my old stella will get that way on its own soon, if i keep banging on it. Brad