I've a near mint Arthur E. Smith internal resonator 5 string banjo in cherry that a friend wants me to sell for him.
I'm not into banjos myself so have no idea of its value. Web searches have not helped.
I've a ton of pictures I can forward if that'll help.
Would appreciate anyone's input on this fine instrument.
Thanks, Ce.

Please post pictures here, Iâm not familiar with the maker.

Yes, photos front, back, headstock front/back, pot front/back...please. Are you going to sell it here on BHO?

That would be the Shelburne model. Very desirable banjo.

Sell it here and it will sell in five minutes.

Don't know how to post pix here, sorry. PM me and I'll send to your email.
I'm very interested in posting this banjo here but first I need to figure out what it's worth.
Thanks EricA for the Shelburne designation.

They really do not come up,for sale often, so pricing is difficult as they are pretty rare, but the last one I saw for sale about 2-3 years ago sold retail from a recognized dealer for around $2500 USD.

I donât know what the current market would hold right now as prices are getting a little depressed, great for buyers, not so good for sellers, but between 2,000-2,500 sounds reasonable.

Wait a few days and see what others chime in with.

Very desirable, indeed!!! A recent post asked people to write about "the one that got away." The AE Smith Shelbourne was mine. Ready to buy my first non-homemade banjo, I just couldn't see putting out the cash. I went for a fine, less expensive AE Smith model, but I've spent a lifetime pining for the internal resonator one.

Picked on one (I was a lousy 5 string player years ago) back when they came out. I was very impressed; one of the nicer banjos I've encountered before or since.

I believe they were based on the old Bacon Professional models from the teens.

They're probably the best of the IR models offered over the years by various makers (IMO) since they combine the doughnut ring of Washburn with an even higher quality internal resonator than Bacon. I got obsessed with IRs awhile back and tried to acquire one of each of the major makers of this design: Bacon, Yosco, Reiter, AES, and Ball. All have unique tonal characters but the AES are very special indeed.

Back when "Pickin'" magazine was a thing ... I ordered an A.E. Smith catalog from their ad. I became obsessed with the idea of an Internal resonator banjo. But at the time didn't have the money to spend on one. By the time I got to a spot where I could afford one, A.E. Smith was unfortunately defunct.

I've never owned one of their banjos - and have only played a couple. The ones I have seen were very nice. I think they should be quite valuable both because of they are rare and of excellent quality.

But the market for IR banjos is thin and very unpredictable. If you are shopping for one - they can be very hard to find.  But if you are selling - buyers may be few at any given time.  So it is all about timing and circumstances.

I have owned and set-up dozens of other IR banjos - most by Bart Reiter... and a few original Bacons too. It is my experience that there is a BIG variation from one to the next.

The original Fred Bacon concept was a resonating chamber that housed a spun-brass tone ring (maybe a descendant of the Dobson TR idea?). As the name suggests, the chamber should "resonate" and strengthen the volume and bass tone of the banjo (hence the "ff - fortissimo" designation).  When the banjo is well-constructed and the resonator does its job - the result is amazing. Great IR banjos have a BIG "wide" sound that fills a room without being to focussed "in your face."   But sometimes - if the wood rim and metal parts are too heavy and just don't "resonate" as they should - the result can unfortunately be dull and unexciting. Also - some so-called Internal resonator designs are nothing more than a partial back attached to the rim - without the other components or characteristics of a Bacon FF.

This is a photo of a gathering of Reiter Internal Resontaors that briefly assembled at my house several years ago.  I don't own all of these banjo's now.  But it was fun while it lasted...  :<} 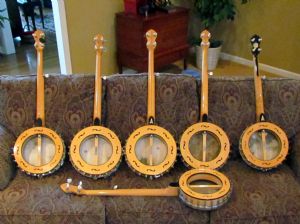 John, that picture is so delightful! Still never seen a Reiter 12" IR - would love to own one someday. Your fancy short scale is fantastic.

In 1888, CE Dobson patented and then marketed an IR -- 18 years before Fred Bacon. The patent stresses the same virtues as stated by Bacon and says it could be made of wood instead of metal.

Regarding the second photo, great banjos can be made to sound even better. 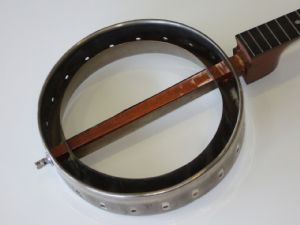 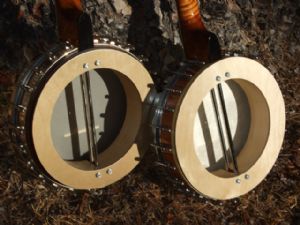 is this the model of banjo? dont know anything about them other than WOW! 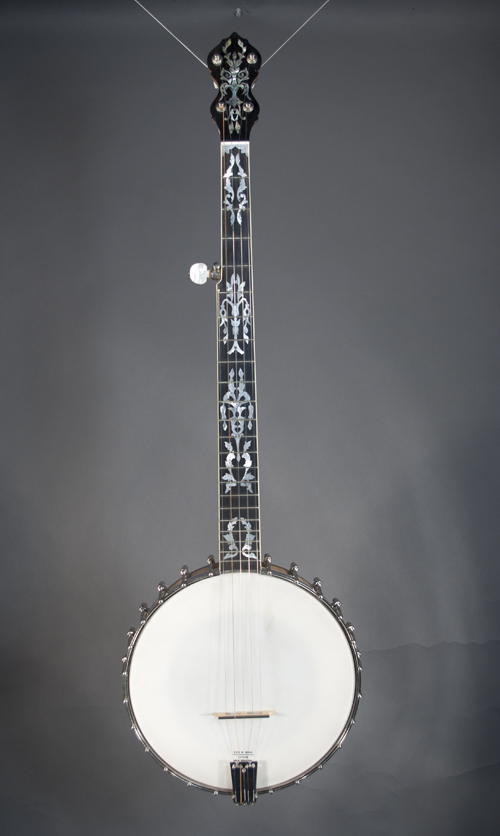 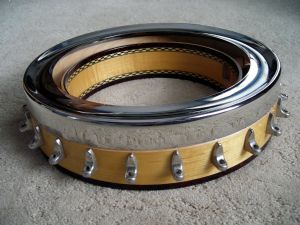 Looks like the banjo is sold, folks.
Thanks so much for all the help and valuable information.
Ce

'Cambridge Forum - Stephen Wade: The Beautiful Music All Around Us' 1 hr