When pollen is in short supply, bumble bees know to bite the leaves of the plants.
This stimulates the plants to produce more flowers.

Brian, I never knew that. You are "abuzz" with little known information. I give you a high hive. I mean high five. Say hi to Heidi for me.

I'm in love with bumble bees because they are willing to do the work to pollinate grape vines.
If you sit still, you can get within inches of them and watch them work.
Our planet is infested with colonized honey bees which are too fussy to pollinate many crops with the same enthusiasm as a bumblebee.

You like cucumbers, melons and other cucurbit squashes?
Don't expect a honey bee to flap a wing to pollinate those.

I shall give Heidi-cat a hug from you.
She sits at the kitchen sink to watch Bee TV as they work through the clusters of grape flowers.
Crept up to +25C today, the grapes ought to flower soon, always the last thing.

I have a half dozen patches of chives all flowering now & they're teeming with different kinds of bees.

I could keep making mason bee houses because the ones I have are all filled up!

We were sitting out back yesterday watching bees.dragonflies,swallow tails,different birds I haven't identified yet & the tree swallows were moving nesting materials into the bird houses I built for them this spring. Looks like a healthy eco system to me!

When pollen is in short supply, bumble bees know to bite the leaves of the plants.
This stimulates the plants to produce more flowers.

Cool. And I'm not surprised. Bees are so smart! Just got a hive of NY/Russian honeybees, who are a bit more protective of their hive than Italians. But you know what?  They rarely sting. They buzz around your head -  not your body, they know the difference - and threaten you. There's an evolutionary understanding there that "sting" means death, and they would rather live and support the hive.

Love raising bees, they'll teach you something every day.

...inspired me to cobble together my first bee "hotel" yesterday p.m........ I checked this a.m. and don't see any activity.

...fwiw, my wife says I could have better used my time getting the SurfSide ready.

Yept Owen I get that all the time!

Hope you don't mind Brian but you know how we drift! We might as well add the birds too!

Here's one of my Tree Swallows. I put over a hundred bucks into a house for them with the pole & everything. Got a wasp nest! 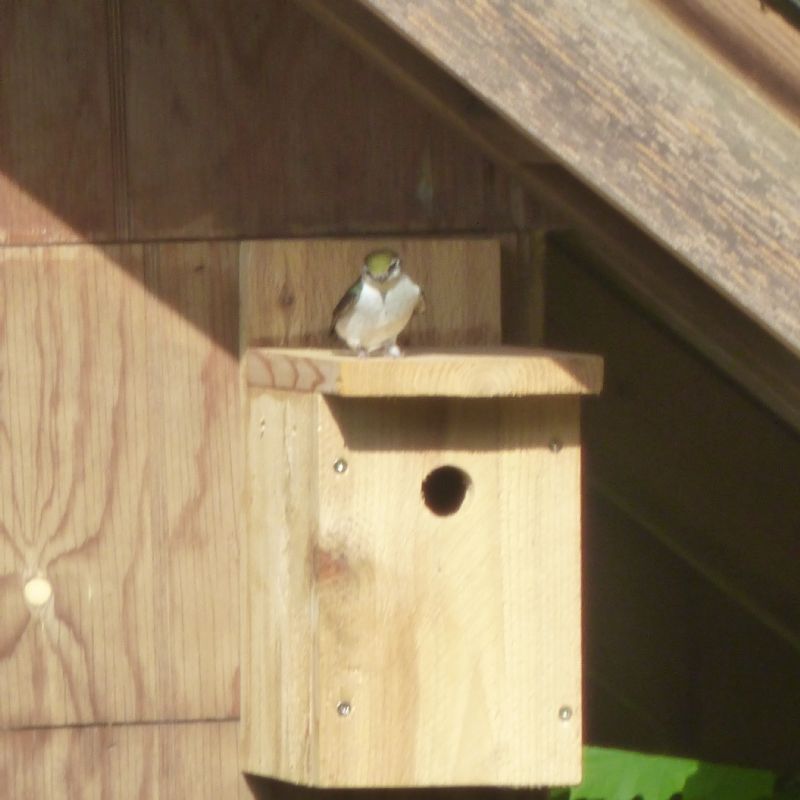 Thread drift? I've dang near perfected that, as you all well know.
It's early summer, life rebounds from the winter.

About time for a whole bunch of bits of good news.
Bee happy. HoiSin/Honey/Garlic sauce on the chicken tonight.

At the same time, we can't ignore the strange problems that bees face in this day and time.
Colony Collapse Disorder has many causes. Some are clearly caused by people.
Expensive and poor crop yields as a result.

Their colour changes according to the light. The one in my pic looks green from the front. A female I think.

It's funny to see them fit some twigs & straw that are too wide to go sideways in the hole. There's hanging flower baskets under them & Terry had to pick out some stuff that wouldn't go in! They fly like little jet fighters.

There have been a few of the mud-nest builder swallows around my place over the years.
They eat bugs = friends of mine, like the bats. No, I don't eat bats. I'm told some do.

I'd like to experience the swallow's sense of vision because I know they catch insects in flight.
Do they catch and eat bees? Anybody know?

When I lived in Yonder-Tario we had barn swallows nesting at work on the ceramic outdoor lights. Great incubators.

They'd swoop right at your head but didn't hit you. it was funny to watch guys that weren't used to it!

Another cool bird to watch is the Night hawk. I worked evening shift at a factory & at dusk & they made this Peeeent sound. Amazing fliers!

There have been a few of the mud-nest builder swallows around my place over the years.
They eat bugs = friends of mine, like the bats. No, I don't eat bats. I'm told some do.

I'd like to experience the swallow's sense of vision because I know they catch insects in flight.
Do they catch and eat bees? Anybody know?

Don't know. But I'll say this, honeybees - not bumblebees - fly much higher up than people think. Next time you're near a honeybee hive check out how they leave the hive, starting with a kind-of pseudo-spiral take-off that takes them straight up. And since they might fly to their feeding site more than a mile they may have to navigate over trees and such.  And to take the thread even farther adrift I've heard that moths and  butterflies migrate thousands of feet up.

Your wish is my command.

Salient features: a) built following the KISS principle, b) made from recycled pallet wood,  c) 7 stories high,  d) holes 1/4", 5/16" and 3/8" [equivalent to double, queen,king beds I figure], e)  easy, 2-screw removal for cleaning (?)  f) located on SE corner of shop... well protected from rain, but hopefully enuff sun g) in the "rustic" style that I've heard the bees prefer [although I will probably paint top, bottom and ends white, IF I remember next time I have white paint opened].

To promote thread drift, take notice of the tin hood in the first pic. It's the wind deflector/hood (?) for the fan above the welding table on the inside.... works regardless of which way the wind blows. 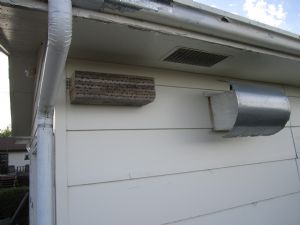 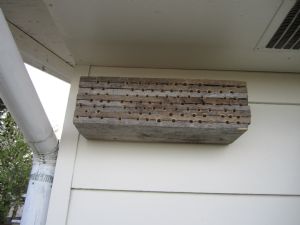 That's great Owen! I chopped up some thin bamboo & zap strapped 4 short sections together & stuck the end in a crack in the woodshed as an experiment. All 4 filled up. 2 with red mud & 2 with grey mud.

... looks like I still have a thing or two to learn re. the KISS principle.

Edit: the websites seem to say I should have put it up sooner, but the apple/crab/lilac are just nicely coming into bloom, so, we shall see...... of course dandelions have been displaying their marvelous adaptations for a few weeks now.

Anybody got anything to promote the health of bees is welcome to post it here.
This thread continues to drift in the right direction.

I got behind in my pruning. My apple trees didn't get touched for 2 years (my health).
You should see them now = totally white with apple blossoms.
I'll wait until petal fall. Give the bees every chance for a feed.
And chances are, the bees work for a human friend of mine over on First Avenue!

Don’t have any insights into bee health, but I do know I took 5 pallets of New Zealand bee cages from the Vancouver airport to Morinville, Alberta a number of years ago.  I had to stop every 3 hours and open the trailer doors to ventilate them - one stop was in Valemount ; the 15 minutes there seemed like a week ;-)  I had to keep the box with the queen bees in the cab.  First thing the customer did when I got there was quickly open the trailer doors to check their condition - they told me the driver from another trucking outfit the previous year had not turned on his reefer and the bees died.  I had the reefer set to 58*F (if I remember right) as was on noted the BOL.

Round-Up (Glyphosate) has been a very popular early growth plant killer ( weeds and grasses.)
Apparently, it kills off the microflora of bacteria and yeasts that thrive in the bee's digestive tract.
Makes the bees utterly vulnerable to any bad bacteria that drift into a hive.
Now if that is not poor social distancing, I don't know what is.

Just one of the reasons for "Colony Collapse Disorder."

Round-Up (Glyphosate) has been a very popular early growth plant killer ( weeds and grasses.)
Apparently, it kills off the microflora of bacteria and yeasts that thrive in the bee's digestive tract.
Makes the bees utterly vulnerable to any bad bacteria that drift into a hive.
Now if that is not poor social distancing, I don't know what is.

Just one of the reasons for "Colony Collapse Disorder."

The decline of bees is one part of a very broad decline of insects in many parts of the world. Can't say "global" since research on this has not been global. But if this massive hive death like we saw last year is caused by the same factors that's causing death of insects that means we are not talking about varroa, or honey bee viruses, we're talking about factors affecting just about any kind of insect. I remember 5 years ago standing in my backyard just listening to this incredible buzz of 100 bumblebees. Now in July I might see less than a handful. My street used to be lit up with fireflies. They are gone. OK, my backyard is not "the world", I get it.

More power to anyone supporting the bees. That's why I have a hive, the honey is just a gift. And if they swarm, which they just did, that gives me a good feeling, maybe they will find a place to survive in the woods or riverbanks, and spread out into the wild.