Hello people! Nice to see my account is still active and familiar names/faces still around after I had a long hiatus from the banjo!

I'll spare the whole backstory: I'm learning 2-finger at the moment. I previously was, I think, pretty ok with clawhammer and I had a number of basic bluegrass rolls committed to muscle-memory before I switched to CH. I've learned 3-4 tunes (thumb-lead) from Doc Turknett's YouTube channel and will doubtless be a paid-subscriber later this year. At the moment I have Sebastian Schroeder's 3 books in front of me (one for index-lead, one for thumb-lead, one for mixed-lead).  My target, must-learn song is Wayfaring Stranger which is a mixed-lead arrangement (and I don't want to compromise on a simplified thumb-lead version).

So I've started in on the index-lead book with Cripple Creek (gDGBD) and getting my right-hand to behave is seeming harder than I remember when trying to first learn the bum-ditty for CH.  Specifically, I'm doing ok picking a melody note on the top two strings (the B and high-D) but can't keep my ring&pinky planted or half-float accurately when doing the lower two strings (the low-D and the G).  Such as this measure 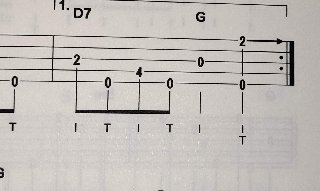 It feels easier or more natural to switch back to thumb-lead on these two strings and just hit the high-D for the drone note (or even fret it at the fifth) here.   And the intro to SS's mixed-lead book specifically mentions the ease of hitting the strings as a driving reason to learn mixed-lead in the first place.  So my question is

1. Should I push myself to learn Cripple Creek and a few other songs as-they-are, index-lead across all 4 strings, and ignore the tempting shortcut? Or...

2. Go ahead and learn to play these songs in a mixed-lead style where it feels natural since that's kind of the goal anyway?

I'm torn between the NO SHORTCUTS admonition and the "play however pleases you" & "banjos don't have rules" line of thought.  I have no particular goals except to play alone at home, amuse friends&family, maybe one day play along with others.  I don't want to do myself a disservice but I don't want to waste time on a micro-skill I won't really use.

You have to decide for yourself whether doing it "your way" is natural and sounds good for you, or if you're just fudging it. Learning it the way it's being taught to you I guarantee isn't going to hurt you in any way; I'd say learn it, then do what you want and feels good. That "micro-skill" may come in handy somewhere else!

I'm confused. What I am reading (words) IF they relate to the tab and what I am seeing (tab) seem to be 2 different things. The tab I am used to reading has the strings tuned DBGDg (first string to 5th string) from top of the picture/measure (1st string, D) to the bottom (5th string, g). As a former 2ftl player, I don't see any issue with playing the measure as shown (other than the obvious, as the index is leading), but maybe I'm missing something here? Maybe I'm just getting old. It's been awhile since I have played a 2ftl, but as I recall I really didn't plant any finger on the head -- that came when I switched to Scruggs style. I guess I didn't know any better when I played 2ftl, but it worked for me. I'm in the camp of learn-it-the-way-it-was-written first, then experiment later.

Barnacle Joe, I think you shall develop your own style and play in the way you feel. However, when developing your own style you sometimes have to go through some boring exercises. So my suggestion is that you shall try to play in both ways: your way and the book's way, but with focus on finding your own way. You will not be a good banjo player by avoiding, but you will with trying.

I think his books are great. Simple, easy to follow, great tabs, etc.

I really like how the tunings are grouped as well so it's not like one of those books where every other song is in a different tuning if you work cover to cover like I do.

I think his books are great. Simple, easy to follow, great tabs, etc.

I really like how the tunings are grouped as well so it's not like one of those books where every other song is in a different tuning if you work cover to cover like I do.

Thanks for the information, I'll have to order the book.