When it comes to open back banjos, I have absolutely no idea what tone to look for.

That said, I want to build one. I have sone sassafras that I could build a block rim from. I would build it as a woodie, potentially an archtop woodie. What kind of tone would sassafras produce?

Tone comes from your fingers.

I built a Telecaster body out of sassafras a year or two ago. All I can tell you is that it is fairly easy to work with, smells nice and dents easily.

Because it is somewhat soft, I would cap or bind any hard edges that might get bumped.

It's most similar looking to chestnut and used as a substitute for that in antique restoration.

I would think it would be challenging to make a block rim from it on the grounds that the end grain joints between the segments would have a lot of tear-out when you turned it down—at any rate that's a problem with chestnut. You might have to use it as a core and have a veneer on the outside, which is what was normally done with chestnut when it was still used commercially to make furniture.

You could avoid the open grain gluing by laminating the edge and face grains then cutting out and turning the rim similar to the method in the Scruggs book. This can waste a lot of wood though and leave you with a lot of open grain to finish or wrap.

I think you are best to find something more dense. Maple, beech and ash are cheap. What's available to you locally?

I enjoyed the Sassafras I had when I made two Helix type rims from a plank from Ohio.
The owners are getting strong mid-range.
I found it to look more like quarter sawn Oak.

I use no veneers, nor anything like glazing to apologize with, just clear finish
I made wooden armrests with it to match the rims.

You could make a 3-tier, 18 brick rim, all you want, but it won't have the same musical characteristics. That's an apartment building where the bricks are coated with glue on 4 of the six sides available.

I don't experience tear out. My daily player and stage performer is 150 yr.old Chestnut rim with a Cherry neck.
If you don't use it, sell it to me. 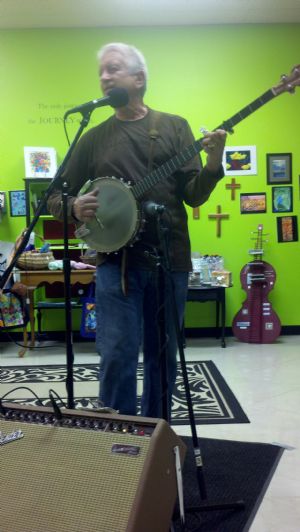 When it comes to open back banjos, I have absolutely no idea what tone to look for.

That said, I want to build one. I have sone sassafras that I could build a block rim from. I would build it as a woodie, potentially an archtop woodie. What kind of tone would sassafras produce?

As for the Sassafrass, Helix has made you a nice offer—I don't know how much he's willing to pay, but I'd take him up on it.

I only use sassafras to smoke pork and chicken. I like the idea of a sassafras banjo though!

There's a sawmill not too far from us that went out of business when the building code was adopted in PA—The code prohibited using local hemlock lumber for houses anymore (even though there was a 250 year history of it in the state—many spectacular landmark houses built from it)—now it had to come from Idaho or somewhere like that and be stamped, so the family sawmills here were legislated away overnight (end of editorial).

I bought all the hemlock framing and pine roof decking for my house from them before the code went into effect—I got to know them.  They had a lot of pallets of this-and-that in some sheds outdoors that had been there for at least 30 years (at that time). I also bought a pallet load of curly red maple I used for flooring and saved out the best boards for banjos (I still have some), a pallet load of ash I used for trim, and a pallet load of black locust I used for porch decking (still have some).  This is air-dry wood you cannot just go somewhere and buy.

Anyway back to the subject at hand—sassafrass—back around 25 years ago there was a powerline built along the Susquehanna river and they discovered a stand of sassafrass trees up on a remote mountainside that were much larger than normal— the word spread in local "wood circles".  So my sawmill friends were offering to sell me a pallet load of sassafrass, which I guessed was from this stand,  and wanting to be supportive, but being out of the 18th century restoration mode, I couldn't think of anything to do with it, so I passed on it—It's one thing to buy a couple of boards, another thing to buy a pallet load. The sawmill has been out of business now since 2006 but I drive by there every so often and I see the stacks still there in the sheds—makes me sad.  I think they just abandoned the business in disgust and I don't blame them.

I intend to talk to the owner, who I left on good terms with, about what curly maple they still have, and he had said back when, that they cut some spectacular curly ash, which is a stretch—BUT If I offered spectacular curly ash from northern PA for banjos, would any body buy it?  I'd get some lame unanswerable questions like "what does it sound like?"

Anyway, there's this sassafrass from a remarkable stand on the side of a mountain I could get a pallet of at a good price, BUT which would be subject to the same stupid lame unanswerable question dependent on erroneously believing that the rim is a sounding board.

Think I'll stick to the maple—anyway,  if I thought there was more than a passing interest in anything unusual, I could easily become a banjo wood supplier—I am very fortunate to live in the greatest temperate hardwood forest in North America, and sassafrass is not anything that is commercially valuable around here, so the price would be right.

Hunter. Hold the plank in the middle with one hand and tap it with a dowel or something
Tell us what it sounds like

Remembrances for those who have gone before

Anyway back to the subject at hand—sassafrass—back around 25 years ago there was a powerline built along the Susquehanna river and they discovered a stand of sassafrass trees up on a remote mountainside that were much larger than normal— the word spread in local "wood circles".

Think I'll stick to the maple—anyway,  if I thought there was more than a passing interest in anything unusual, I could easily become a banjo wood supplier—I am very fortunate to live in the greatest temperate hardwood forest in North America, and sassafrass is not anything that is commercially valuable around here, so the price would be right.

The sawmill I got my Sassafras from had a couple of planks that were 14" wide and 12' long. The owner said they found the tree locally (North Alabama). I bought a 9" wide plank that was 2" thick and 8ft long to make a couple of Telecasters. Must have been one heck of a Sassafrass tree!

There was a pretty strong old-time tradition of making Sass furniture. Bed frames, chairs, etc. I don't think anyone does that anymore.

I know people in Indiana that have an old barn on their suburban place. The barn is at least a century old and sided in unpainted sassafras. The vertical planks are 15 inches or more wide. I was amazed at these wide boards, for I haven't seen a local sassafras more than about 8 or 10 inches in diameter. The bar is in remarkably good condition today. Makes you think how well a banjo might hold up.

Brings back some memories. When I was a kid folks around here considered Sassafras tea a powerful "Spring Tonic". My grandparents would ask me to get them the roots from red Sassafras for making that tea, they didn't think the white Sassafras was as good. I loved the smell, and loved the tea, but nowadays they say there is a chemical in it that is not real good for you.

It wouldn't be my choice for banjo building, but one time my cousin called me because they had bulldozed down a bunch of large Red Sassafras trees on the family farm, and he knew we liked it for that tea. I went over there with a sharp ax and harvested a pickup truck load of root without having to do any digging. I sacked the root up in burlap bags and hung it in the barn, which made the barn smell wonderful for years. I had enough to supply anyone in the valley who asked for it for many years.

The lumber from the tree used to be used for truck, and wagon beds because it had some resistance to rot and could take a hard hit without splintering, but I never knew of it being used for much else.

Ken's mention of Hemlock reminds me of another cousin's house, which I helped him build forty years ago. We sided that house with Hemlock, and had the mill cut T&G paneling for much of the inside. That family owned mill is long gone, and very few are still in operation in this area.

Evidently Sassafras is much in demand as a decorative wood in Asia. Also you could make tasty root beer from the root bark as Andy mentioned above, and you could make filÃ© powder out of the leaves for your next batch of gumbo. Native Americans in the Southeast regard sassafras tea as medicinal. The roots also yield safrole, which is a chemical precursor for MDMA. What a wonderfully multipurpose tree!

I say go for it on making a rim. You'll be the only dude on your block with a sassafras banjo. Inlays shaped like the various hand-like forms of sassafras leaves would look really cool on a fretboard. If my parents ever have to cut down one of their sassafras trees back in NC, I'll ask them if I can have some wood for a banjo too.

a sassafrass leaf inlay motif would definitely be great.  The Pennsylvania Germans use the roots to make root beer.

Apropos of  the PA Germans, and Andy's hemlock comment, as I write this there are some Amish guys building a pole shed for my neighbor's maple sugar shack, and they are using hemlock for all the siding, battens, roof purlins, slats, everything but the roof framing trusses (which they made from stamped 2xs), and the pressure treated posts.  I asked them about it and they said that they have some members of the community that are allowed to grade sawmill lumber for uses like ag buildings. 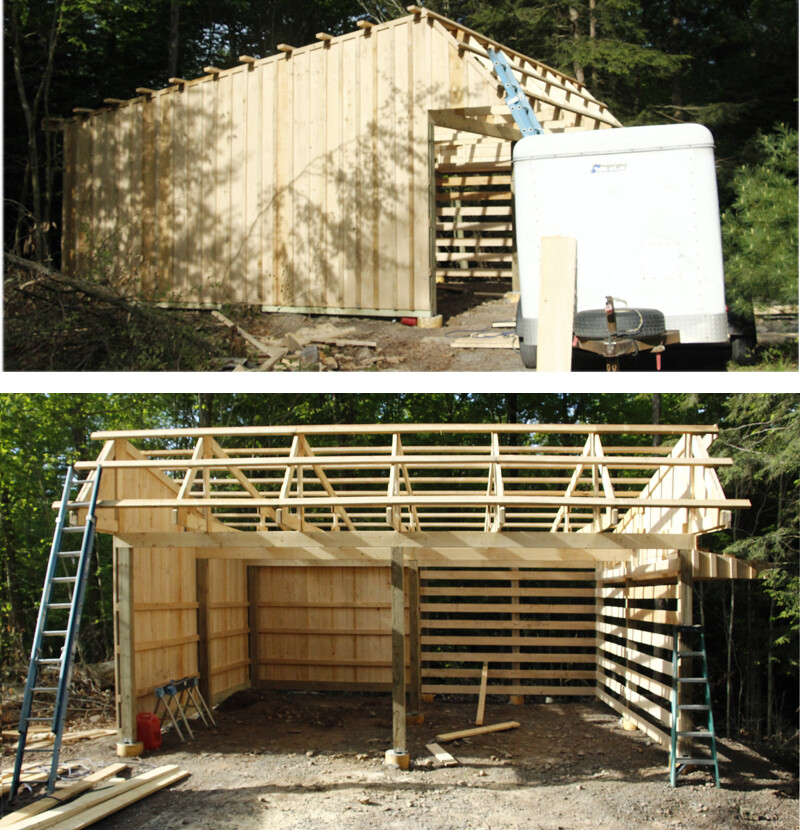 Helix Cold Root Beer #003 is on the far right in the front row. 19 frets. The armrest shows clearly 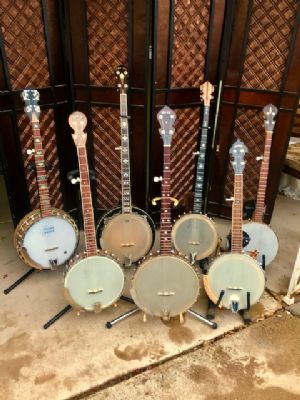 'Elisabeth Cotten and the banjo' 1 hr

'The descendents of those that fell ' 3 hrs