Looking at picking up a banjo within my budget and came across a banjo with a cracked neck -- is this something I would be able to repair at home with wood glue?

(Assuming I'm willing to chance having a less-than-perfect banjo) 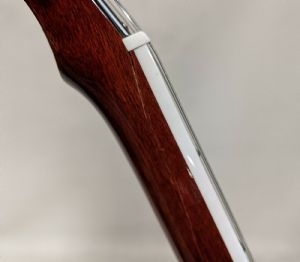 stay away from this thing

What makes you say that?

Trying to understand what goes into this

There is a truss rod that runs through the neck and puts it under tension to bend it one way or the other, which is one thing that complicates the repair. And, the crack is hairline and you will need to get enough glue on both surface to securely bond them together. A good wood glue repair, I am told, is actually stronger than the wood around it but you would need to open that up enough to coat both surfaces. I am sure good Luthier could fix it so as you would barely notice it and it would be quite strong, but that is going to add unexpected cost.

First of all, welcome to the hangout. Keep it positive People have their opinions.

This is a common repair, whether you do this or someone else. The trick is to get it glued without glueing the truss rod inside the neck.

Leeching slow superglue gel into a spread open crack will usually do the trick.

If you are careful with cleanup, then the repair is difficult to detect. It's a perfectly good banjo, repair is a good thing.

I hope others with more experience will ring in. I am doing this repair right now with an Oscar Schmidt, but it's a clean break, not a crack.

Super easy repair and very common, I would personally avoid superglues and just use titebond original, the hardest part is flexing the crack open enough to get glue in without breaking it further than it needs to be

Does the crack go all the way through, appearing similarly on both sides? Does flexing the peghead show movement in the crack? if it does, you can likely massage some glue into it. I would use hot hide glue or fish glue.

The one and only time I repaired a hairline peghead crack, I put Titebond wood glue on a piece of wax paper, flexed the crack slightly open and pushed and pulled the glue-y paper into and through the crack as much as I could.  Clamped with a custom caul made of moldable thermo-plastic.

That's a reasonably easy repair. Simply follow Bob Gaddis' and Ken Norkin's advice, and be careful about where the glue goes.

Titebond Original will do the job and will be easier to use for a person who has no experience with hot hide glue.

Whichever way you go, practice with your clamps, cauls, and padding before actually applying glue. A dry run, so to speak.

I also believe that Titebond Original is the best for most people.

Highly experienced people can do well with hot hide glue.

I do not like CA or super glues for these repairs. The stuff is messy, unpredictable, and if the repair fails, it will be nearly impossible to repair correctly.

I don't like super glues for this kind of repair, either. Super glue has its uses, but neck cracks are not one of them.

Thanks for suggestions everyone! The crack doesn't fully go to the other side, its just one sided as far as I can tell.

I think I can use something like a razor blade to push the glue into the crack and then clamp it shut for a while. Thoughts on that?

Flex the peghead back and forth while rubbing glue into the crack with your fingers, as Bob G. suggested. The glue will gradually work in. You might want to remove the neck from the banjo while you do this, so you can hold it at several different angles as you are working the glue in. Gravity is your friend here-- glue is a liquid, and liquids flow downhill.

It's a long crack, so definitely use Titebond Original. That way, there will be enough time for the glue to get in there before it starts to set. Make your cauls and clamp everything dry before you apply any glue so you can make sure the crack will close tight. Then remove your clamps and start working in the glue.  When you clamp, put some wax paper between the cauls and the neck so you can pull them off easily after the glue cures.  I'd wait 48 hrs before stringing up the banjo.

I agree titebond it is

From above by Old Hickory (Ken Norkin): "Clamped with a custom caul made of moldable thermo-plastic." That's what worked for me on a long neck that I got for very cheap because someone stepped on the neck at the nut -- totally broken. Years later, there's no sign of any issue.

From above by Old Hickory (Ken Norkin): "Clamped with a custom caul made of moldable thermo-plastic." That's what worked for me on a long neck  . . .

Follow-up to add that in molding the wet thermoplastic to the volute and backs of peghead and neck, I wrapped the back of the neck in plastic wrap. This eliminated direct contact of the warm wet plastic with the wood of the neck. The plastic ended up embedded in the caul -- as did the flat wood block I used on the outside/back clamping surface -- but that was no issue or problem. 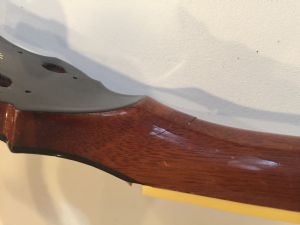 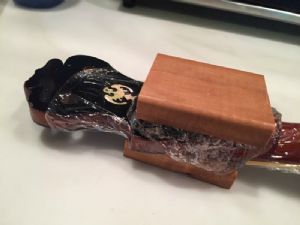 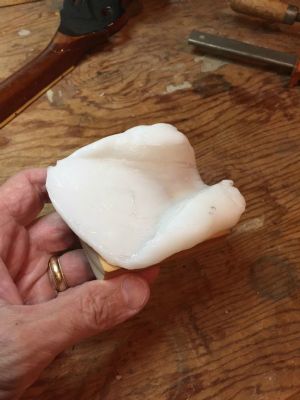 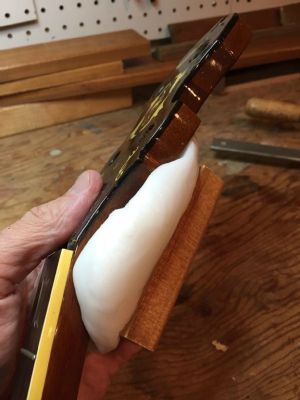 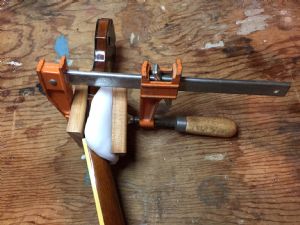 This is a trivial point compared to what the others are showing, but if you get Titebond with the rectangular opening, you can often press that right up along the (opened up) crack and push the glue in with some pressure as you squeeze the bottle. Looking on the web, I think they all have that spout.

About three years ago, I gave a few talks about banjo building at a woodworker's convention in far upstate New York.   This was also a guitar builders' competition and there were a number of luthiers entering collector level guitars, most of which were made from beautifully grained Brazilian rosewood with bear-claw Adirondack spruce tops and very fancy inlays, etc etc. These instruments sold for many thousands of dollars, as you can imagine.

All the guitars, violins, mandolins and banjos were in one part of the convention center, which had big glass doors facing north instead of a solid wall. During the night, the temperature dropped way down, it snowed, and some cool air drafts must have penetrated the hall.  In the morning there were at least four of these guitars that were cracked in the backs.  It was a real gut wrencher.  I went to the guys with the cracked guitars and asked them if they could fix the damage and if so, how.

The repair method they described to me was to flow CA (super glue) into the cracks, which would wick in, coat all the wood fibers on both sides of the crack, close the cracks and make an invisible repair.  For whatever it's worth, that's what they did.  I have also read that cracks in things like violin bows that need to be really strong are repaired that way.

Here's a little video of a guitar builder repairing cracked Brazilian rosewood the same way—I'm guessing this a common technique among people who know what they are doing.

Ever since then, If I have some closed crack in something

I attempted to repair violin bows 3 or 4 times with CA with no success. That was several years ago.
"No success" means a failure rate of 100%.

I've never tried to use it on a high stress joint of any kind since.

Some years ago, I did several side and back crack repairs with CA on an old Gibson flat top. I had occasion to see the guitar several times after I did the repairs. Starting about 3 years after the repairs were done, some of the cracks showed signs of deterioration. The last time I saw the instrument, the deterioration had increased and 2 of the cracks had become active again.

So I've also quit using it for cracks.

I've also used it for cracks between the pin holes on guitar bridges. I've had about a 50% long-term success rate on those. So I tell my customers that the repair is temporary, and if it fails, the bridge will have to be replaced. Most customers would rather spend $25 - $35 on the temporary repair than pay for the cost of a new bridge.

Bottom line is that I've found Titebond Original and hot hide glue to be the most reliable glues for wood to wood joints under tension, and CA to be unreliable.

I mostly use CA for filling nut slots, seating inlays, and patching fingerboard divots. It works well for those jobs.

Piano soundboard cracks are reapaired with spruce shims glued into the cracks, which are first scraped out and evened out with a tapered tool that matches the wedge shape of the shim. I've seen this done with CA, and all of those I've seen developed problems.

When repaired with standard Titeband, or in some cases, with ordinary Elmer's Glue-all (bull sem*n, as a co-worker called it) they stay for years, and with the Titebond, it's the wood that later cracked again, and not the glue itself.

I also have a friend who tried supergluing a fishing rod. It too couldn't take the stress.

It may work for quite a while for guitar backs, and even better for guitar sides, as they don't face the same stresses as a piano soundboard, but I'd never want to risk using it on a cracked banjo neck.

I guess I'm just lucky— I've never had a bit of problem with CA and use the Bob Smith Industries maxi-cure and insta-cure, which Is also sold by Grizzly.  I have never had a joint come apart in maybe 5 years, although I only use it for minor repairs and binding, stuff like that, often where it has to be flowed into a crack then clamped tight, like a bit of veneer coming apart at the edge.  I glue all bridge saddles onto bridges with it and mix it with sawdust to infill around inlays—very useful stuff.

From day to day I use 5 kinds of glue—(1) Titebond 1 for general new work, and I go through several gallons in a year,  (2) urea laminating glue for laminating rims and top veneers on resonator backs, etc.  (3) structural epoxy, which has no water and does not introduce moisture into the wood, for laminations that must remain flat and not cup, and for attaching fingerboards, (4) a different epoxy where aluminum is involved, (5) another one for wood inlay / marquetry, and (5) CA for minor repairs and bindings.  I find that these glue types are not interchangeable, although epoxy can probably do some of the same things as CA—it just takes a million times longer to cure and is messier.

We all have our favorites and there seems to be a giant fan-base out there for Titebond and animal glue.

I have had problems with Titebond and just sent a gallon of their fairly useless veneer glue back to Woodcraft after a miserable experience with a resonator back, and I should have known better, but you don't know unless you try.  I wouldn't use regular Titebond to glue anything that had been previously glued and had glue residue—only for new clean perfectly matching joints like laminating necks and standard gluing of new work.