Per the subject line, I'm trying to identify this banjo which belonged to my father. It appears to be a 1920's era Gibson Mastertone plectrum banjo PB-x, however after doing some internet research I'm having a hard time nailing down the exact model.

You can see in the uploaded pics that this banjo has a carved neck, but these pattern do not resemble any of those pictured in the websites or guides I've seen. Also the tailpiece curiously looks like its from a five string model, making me wonder if this instrument is a composite of parts from different models.

Unfortunately I cannot find the detailed pictures of the inside (with resonator removed), but I can provide these if helpful.

I understand that Gibson banjos of this era may carry a serial number, and consistent with that observation there is no number marked anywhere on the instrument. I may have expected to find a so-called batch number handwritten on the inside of the resonator, but only traces of chalk marks remain. The Gibson sticker on the inside does appear authentic but I have read that these are often counterfeited.

I'd appreciate any opinions from the forums members regarding this banjo... thank you. 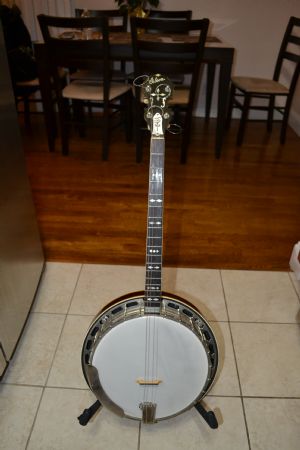 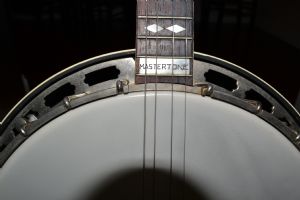 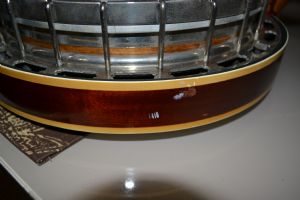 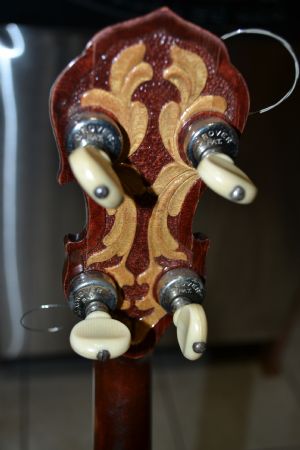 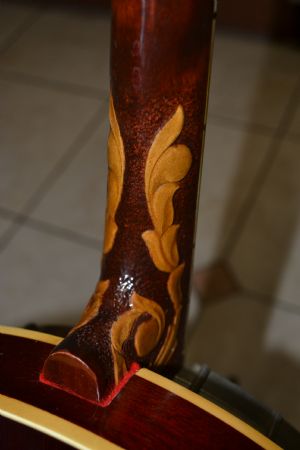 I would think that to be a TB-3, but I can't be sure. The mahogany neck and resonator and diamonds and squares inlay pattern would point toward a TB-3. But that engraving throws me off. Perhaps the engraving was done aftermarket?

Things I notice....one piece flange (typically not until '29), flathead tone ring (very most likely not original), and the tension hoop has a five string neck spacing, but the neck is four string......I question the originality of everything actually being Gibson, or from the '20's. Lots of things could have been changed or created on this instrument over the years. Label and serial number inside the rim?....and matching number on the inside of the resonator?

Post pictures of inside the rim, the Gibson decal and inside the resonator. Look for a number stamped on the wood rim

The cutout for the heel in the resonator, looks suspicious to me, and reminds me of similar resonator heel cutouts on Japanese Masterclones. I’d be surprised if the resonator or the pot assembly is original.

As mentioned, lots of issues that point to this being either a parts banjo, or a Japanese Masterclone with a nice aftermarket neck.

Adding to the above thoughts, the pot itself looks to be the wrong color. Way too light in the stain color. Resonator binding looks wrong also.

We really need to see the inside of the pot. Label and most importantly, serial number to give you any really accurate answers.

Even if itâs not a true Gibson, that does look like a decent quality instrument. Probaly a very nice players instrument.

I only count 19 frets, which makes this an ordinary Tenor banjo.

From what I can see in the pictures the wood appears to be mahogany. TB 3's were made of straight grained maple in the 1920's.

Agree with all comments above. My "guess" based on the original looking MASTERTONE block (with that old font), and the old Grover tuners, this might be a real TB 3 neck that someone used to make a "project banjo". They wanted to try their hand at "carving" on the neck, so they added that. The pot does not look like anything more than a Masterclone or "perhaps" a style 100 pot with "upgrades" such as the flat head tone ring (never used on a diamonds/squares style 3, nor the one piece flange as already mentioned above).

Remember, the Gibson banjo world is awash in orphaned tenor necks. Not surprising that someone would try to use one up in a project.

At best a "parts" banjo.

such as the flat head tone ring (never used on a diamonds/squares style 3, nor the one piece flange as already mentioned above).

Emiel, I forgot to add the Gibson disclaimer!

Emiel, I forgot to add the Gibson disclaimer!

Haha. Thought you did. And you know it yourself: Never say never with Gibson…

OP here... thank you for all the helpful and informative replies!

I've posted some additional pics of the inside of the instrument with the resonator removed... it's not encouraging.

I was informed by a forum member via email that on the pot sticker (not the edible kind ha ha), the 'I' letters should align as a sign of authenticity, and in the picture the letters clearly do not align. As previously mentioned, there is no serial number to be found on the pot nor anywhere else on the instrument. These confirm my suspicion that it's an inauthentic parts banjo, though in my estimation a fairly nice one!

Anyone like to venture a guess as to this banjo's monetary value? 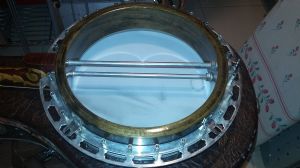 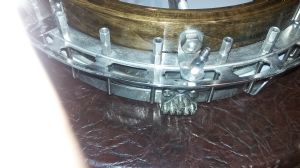 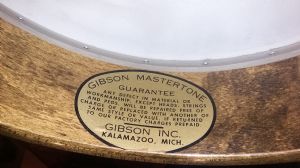 That entire pot assembly is not Gibson. The label is one of the worst fakes I have seen.

Gibson one piece flanges don't look like that on the underside.

And cptone, the letters "i" in "workmanship" and "will" should align perfectly vertically.

I think you have a Gibson neck that someone added to an aftermarket pot and did the carving. I donât think anyone made fake Gibson tenor
Or plectrum necks.

I agree with Dick. The flange looks Japanese. A true 20s Gibson would have a long hex nut attaching the lower coordinator rod. And the label doesn't even try to look real.

The quality of the parts will determine the value. With unidentified parts, I would expect most buyers would assume the worst and hope for the best. A Japanese pot with a pot metal ring would likely be <$200, where a popular ring on a quality 3 ply rim could easily triple that number or more. The tenor neck may add a little value, but only to a tenor player, if you can find one.

From what I can see in the pictures the wood appears to be mahogany. TB 3's were made of straight grained maple in the 1920's.

The maple wasn't always straight-grained either. And while the catalog said the resonator backs were maple, they were actually birch, just like the guitars of the period.

This banjo looks a lot like the 1929 RB-3 archtop I owned for over 10 years. The heel carving isn't Gibson factory work, but it's nicely done, and the banjo appears to have been re-finished to me.

It's interesting. I always liked the classic simplicity of the diamonds-and-squares of the RB-3 along with the snappy tone of the archtop tone ring. But when I traded it in the early 2000s, a lot of lookers wanted the fancier looks of the RB-4's hearts & flowers inlays.

Nowadays, I noticed the diamond & squares is being offered by several boutique makers and at least one manufacturer. What's old is new again, I guess.

Thank you all again for the well-considered replies to my post - I learned a lot!

'Help getting this old Lyon & Healy up and running?' 42 min