Guitar for the Blues

I have decided as an old dude to learn blues playing on guitar and harmonica. I play both instruments already, but not great.

I have several electric guitars, but don't need more. So I am thinking of selling my Gibson Les Paul Standard (tobacco sunburst) 1975-ish good condition, to buy a Gibson ES-335 or similar style. I don't need to necessarily net bucks to the pocket. So what guitar would be of similar value to my Les Paul That would be different and good for the blues.

I will welcome your suggestions and recommendations. Brad

You could stay with what you have. From '52-57 Muddy Waters played a gold-top Les Paul with some fine P-90s. Or you could trade for a really nice telecaster: In '58 he switched to Fender -- a brand new 1958 tele. That telecaster was his main guitar into the early 80s. Myself, I play blues on a telecaster, but I understand the desire for a 335 or something else.

Boy, prices for a brown sunburst 70's LP's are all over the place!!
Some are listing for around $2500, some for more than double that.
FWIW, I think tobacco sunburst is considered a desirable color.

If you get lucky, you might find a dealer in your area who thinks he can make a killing on the LP if he gives you a decent 335 on straight trade.

Blues players have mostly preferred Gibsons with humbuckers, Telecasters, and the occasional Strat. My best advice is to play as many of these as you can lay your hands on; and if you find something that you like better than your LP, to buy it with cash [if you can] and consign the LP.

I don't understand giving up your LP. I have an LP Custom (black, of course) and, although I'd like a 335 (I have a 335-12, but a 12 is a completely different animal), I'm fine with my LP, even though it weighs as much as a small planet. Your LP will be fine for blues. You may wish to experiment with settings on the guitar and amp (and stomp boxes), but you'd do that for any guitar.

I guess I always wanted a Gibson ES-335-or even an Epiphone, but my GAS ended before I bought one. I sure don't need another electric guitar so losing one and buying one seemed like the thing to do.
Yes, I have what more than what i need, including: an old tele, an old hard tail strat, the ol LP, an ancient Gibson 125. But sure would like that 335.
I did buy an overdrive pedal. I have old tube amps with reverb. So I figure to get the tone I seek with a little bit of both. I just have not had the time yet, to tool up a sound system, so I have been practicing on an acoustic.
Shoot maybe I will buy a cheaper knock-off of the 335?
Brad 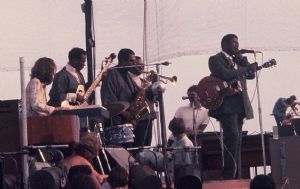 Mr. King is playing a 345, his usual weapon of choice before Gibson started giving him free signature models.

Probably . I saw him live in about 1974-ish.  Sometime near when went to a Muddy Waters Concert, I think.  That could have the pot memory. They may fronted for Chuck berry. Brad

Mr. King is playing a 345, his usual weapon of choice before Gibson started giving him free signature models.

Yes, that's what I twice saw him play. The 345 has the Vari-tone switch and slightly more elaborate fretboard inlays. The 355 has the same peghead inlays as the LPC.

Iâd say you have a decent selection of suitable blues guitars already. On the other hand, if youâre really jonesing for a 335, go for it.

I guess I always wanted a Gibson ES-335-or even an Epiphone ...
Brad

You could do a lot worse than get an Epi. They're well made guitars, and, if it's the shape you're after, just fine. And they're way less expensive. You don't get the Gibson name on the headstock, but it's a member of the Gibson family, and the old ones were made in Gibson's Kalamazoo factory. I have an acoustic - Epi AJ-220, which looks a lot like the Gibson J-45 I got rid of in '80, and probably sounds at least as good. I paid $319 Cdn for it brand new in '16. I paid $600 for the J-45 (from the Sixties) around 1977, and it sounded like it should have said "Rubbermaid" on the headstock. A few years ago I came across an identical one, played it, and thought, "This is why I got ride of mine." They were asking $4000.

Epiphone has two production origins, Korea and Japan. The Japanese versions are of much better quality in materials and workmanship.

I get it, you want a 335, nothing wrong with that, great guitars. But for old-school Blues authenticity it would be hard to beat that ES-125.

I saw Buddy Guy playing a Telecastor Deluxe about 10 years ago and before that a Strat. Muddy Waters played a Tele. Son Seals played a Guild Starfire 5...Blues guys played a whole bunch of different guitars. I tend to agree that the guitar you play isn't so important as what you play.

Do you still have that old Tele? That would be perfect.

Do you still have that old Tele? That would be perfect.

Hey Dean. Yep, still got it.  I strung it up with fairly fat strings. I while on lock down I am going to blues it up.   Mess with a few guitars, including the old Gibson atchtop.  I have been youtubing some blues stuff for both guitar and harmonica.  Good old dude music, eh.  Brad.

I will likely dig out my old champion tube amp with the fender spring reverb in it and link in my overdrive pedal. That or break some windows with my monster amps. Brad

What does âbluesâ mean to you? Muddy Waters, BB, Stevie Ray, Mike Bloomfield, Buddy Guy, Magic Sam (maybe my favorite), Kirk Fletcher, Robert Johnson? They played a variety of guitars - fender, Gibson, acoustic and electric, solid and hollow body. Choose one, or stick with the LP, which is a very fine instrument (didnât Clapton play a LP when he was with the Blues Breakers?).

Actually, the amp might be more important than the guitar. Get a little low wattage amp that you can drive hard at the levels you play at and you can make any electric sound pretty sweet. Vintage is great, but I like some of the new ones with a switch to lower the power to, like, 0.5 watt, or maybe the little lunchbox amps.

Was it Albert King that played a Flying V?

Oh hell yes. It was Albert who OWNS the Flying V! He made me want to try playing upside down and left handed!

Vâs used to show up on stage from time to time. One player I enjoyed listening to was Kim Simmons. In the original Savoy Brown band, from the UK in the â60âs, he played a Flying V. Later when the band was reformed he played a guitar that looked like a sunburst Strat. It was also a stereo guitar, and he would use those effects onstage. I was in the audience the first time the new band played in Detroit (they loved Detroit and Detroit loved them), and when they came out someone shouted to Kim, âWhereâs the V ?â. He looked up but didnât say anything. There was something special about the V, it had its own character.

Man...any guitar is good for the blues. The cheaper and dirtier the better.

I think there are two types of blues guitars - humbuckers and single coils. I've had several semi-hollow/hollow bodied guitars - 330s, 335s, because I like the tone blues heroes get with them. But all of those humbuckers sound the same through my fingers. I can't squeeze out the tone I hear in my head with humbuckers. I always come back to building franken-strats or teles. I feel like I can squeeze out more tone. That's me anyway.... I'm used to the twang and quack.

I should note that I don't play with distortion pedals.  I play with an ep boost pedal, which just warms/heats up the tone a little.

Check out youtube.com/watch?v=uAFO4cBlS8...ure=share. Albert King jamming with Stevie ray, humbuckers with an old single coil strat. They sound different, but both sound great.

'What Hardware Designs You Want to See?' 3 hrs