My favorite design on the peghead of a Gibson banjo is the one with the "Sea Slug" between the 1-2 and 3-4 strings. Is that particular design on certain models, and if so, which ones? I'm researching my dream banjo that I cannot afford. Any info is appreciated, Thanks.

It's the most distinctive and recognizable inlay design on what's called the "double cut" peghead design, and associated with what's called the "flying eagle" fingerboard inlay motif.  Quite possibly the most popular and imitated design ever developed for bluegrass banjos.   What info are you looking for?

Just that, Ken! Thanks. But also, do we see them more on, say, RB-4s or 3s....or am I way off base? maybe the 75's or the Earl Scruggs models? Do we ever see a neck with a style 75 inlay or maybe the Hearts and Flowers and a headstock with a sea slug on it?
I guess a better way to ask is: Is this design, the sea slug, unique to certain models of banjo and if so which ones?

I just love the "sea slug".

As far as I know, the âsea slugâ peghead inlay was usually associated with the flying eagle fingerboard inlays. These were found typically on the Granada and model 4 Gibsons. An exception was Wade Mainerâs Granada, which had hearts and flowers inlays on the fingerboard and the sea slug peghead pattern. There is at least one other such original Granada floating around, and Steve Huber made a couple of Wade copies some years ago.

Here's an overview of pre war Mastertones where you can see a lot of pictures of the various styles.

Are you talking about this inlay? It's generally called "Flying Eagle" because of the inlay at the first fret. (Some call that first fret the "squashed frog".)  Gibson first showed it in the 1929-30 era catalogs with the one piece flange banjos.

This inlay was used on some: style 4, Granada, and some style 3. It can show up in some of the later "floor sweep" 75s, etc. But as far as being put out in a "series" by the factory it was some 4s, some Granadas and some 3s.

As discussed above, for various reasons it sometimes got mixed up with mismatched fingerboards. Like the Wade Mainer Granada.


Apparently it's a somewhat simplified version of an older Gibson inlay design that never really was issued (probably too complex cutting). 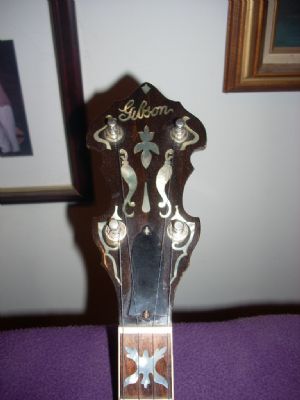 To help your quest it would be good to adopt the name understood for this model, Flying Eagle inlay design

It's my favorite design that Gibson ever did, and I say that reluctantly because my own '27 Granada has hearts & flowers.  HOWEVER, at this point, I think it's been overdone and can fall into the category of a cliché, along with the double cut peghead design—too many imitations have been made

Some of the inlays, like the squashed frog, are so bizarre that I thought at one point it had been cleverly designed to make secondary inlays from the cut-off waste pieces from larger ones, but I could never get that idea to work out on paper.

The slugs themselves (which I have always thought to be very strange, almost like something out of a Salvador Dali surrealist painting) require large pieces of MOP, which get harder and harder to get—I have read that Wyatt Fawley has his own lapidary wheel to make the pieces and buys raw shells.

Several years ago "someone" (I can't remember who) e-published a discovered old Gibson blueprint from the 1920s with a very complex pattern that the Flying Eagle is buried within. Looked like a BEAR to cut out this pearl and inlay it. Apparently Gibson simplified it and brought it out in the 1930 catalog, as what we now call Flying Eagle.

Robin Smith used it on this model of his Heartland banjo. So you can see the ancestor of Flying Eagle. It's mighty purty.

The model is Heartland Gold Sparkle Special, on the Heartland web page.

Several years ago "someone" (I can't remember who) e-published a discovered old Gibson blueprint from the 1920s with a very complex pattern that the Flying Eagle is buried within. Looked like a BEAR to cut out this pearl and inlay it. Apparently Gibson simplified it and brought it out in the 1930 catalog, as what we now call Flying Eagle.

Robin Smith used it on this model of his Heartland banjo. So you can see the ancestor of Flying Eagle. It's mighty purty.

The model is Heartland Gold Sparkle Special, on the Heartland web page.

That is some banjo!

Years ago BHO member Mike Stanger and I were discussing this design feature.

Here is part of the original Gibson design concept showing simplification directives  ("out"). 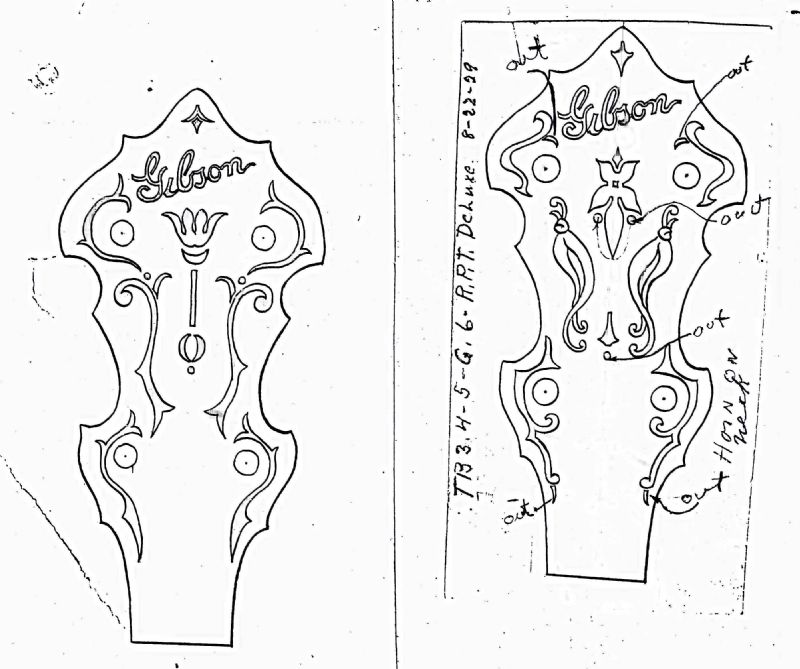 Mike explained that the central figures were stylized "jingle bells" a popular ornamentation in the early 20th century that shows up in various forms, even some banjos.
The "jingle bells" were ornaments attached to the harness of a horse:

I never cared for the term "Flying Eagle" for the pattern, preferring instead "Jingle Bells and Elves Shoes"

The inlay pattern on the left got used on the Blackjack model, simplified a bit (took away the little dots).

My mistake, the Blackjack peghead retains the little dots from the old blueprint.

I heard a luthier in the 80's call the Flying Eagle pattern the "Space Invaders" pattern after the old video game. I thought that was a good one.