Now that I've had a laugh at Arnie's post to my question about my third string going sharp, I'm ready to move on to another question.

I have a cheap tenor banjo that came with a resonator. I took off the resonator because I didn't like the extra size and I like the sound better without it. But the resonator added rigidity to the rim, so now it is a little too flexible. I have an old pot that is the same as the one I have on the banjo so I want to try something. And wanted to get your opinions about whether it is a crazy idea.

I was thinking of cutting an 11" round piece of plywood and mounting it to the back of the rim, with an air gap between rim and plywood cover. I've seen banjos constructed like this but don't really have an idea of what it would sound like. But it would be more compact than a normal resonator, and it would add rigidity to the rim (as you might be able to tell, I can't resist tinkering with things). Any thoughts?

It has more radial distribution

Try putting a smaller disc of 1/8” Birch plywood on a 3/8” high disc of 3/8” dowel in the middle of the pie plate. It acts like a spring, it’s simple and it works to move sound out of the rim
next Rez gap is fun to manipulate , build adjustment in like more washers 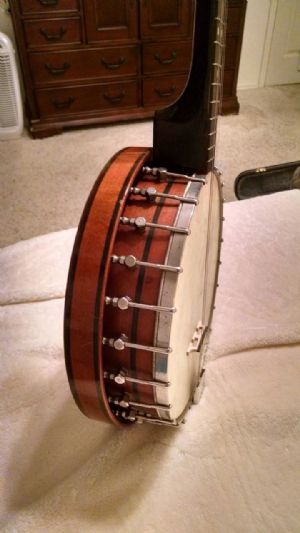 Flush resonators are commonly found on banjo ukuleles from the 20-30's +,  & tend to boost & enrichen  the voice in a positive way. However, I found that tenor banjos w/ this original feature, whether wood, or a common add- on made by Elton does not improve the voice.
If you still want to experiment, use rubber tubing , like on Slingerland  & Gibson BU's to create a gap, rather than washers which will add weight.

( I believe Cynthia Sayer made  a flush resonator out of plexiglass).

There are others who have made flush resonators from plexiglass. I don't know if itis better or worse than playwood, though.

I have a tenor banjo with one of those Elton add-ons, and found that it did, in fact, improve the tone.

There are many flush mounted resonators, some with a convex curve, such as the Eltons, and others that are completely flat. The trapdoor Gibsons of the early 1920's could be closed and were then flush, but had an oval hole in them rather than a gap between the rim and the trapdoor.

I think it's great to play around with your idea. Don't just limit yourself to one material or one design, as it may take some experimentation to find the sound, rigidity, and weight you desire.

I agree that the resonator is a great thing to experiment with and easy to compare the results.

Last year I tried to build a six string(5+1) banjo with a tunneled thumb string. Because I made a major goof the tunnel got caved in so I reconfigured the whole thing into a banjo guitar. It only has 18 brackets so any kind of flange is out of the question. A resonator that fits around a flange would not work. I bought an 11" plywood disc off eBay and mounted it to the bottom of the rim with small hanger bolts and 8x32 hex nuts. I used teflon spacers from Home Depot to set the disc 1/8" away from the rim for air space. Not the most professional looking job I have done but it worked. I heard a difference in volume but not a noticable difference in tone. You may or may not have the same results. But, as my dear old daddy used to say, there's only one way to find out. And, it won't cost that much to find out.

I made one out of an old aluminum street sign...
Worked out good..
Thin n light...

You might also look into OME Banjo's Flush-Fit resonator, a shallow-walled, tension-hook-diameter resonator that clips onto the coordinator rod(s). Some of the catalog illustrations on Ome's site should show the approximate design.

I made one out of an old aluminum street sign...
Worked out good..
Thin n light...

And it was a lot cheaper FOR YOU  than the ticket FOR ME,  for parking in the NO PARKING zone it had been next to!

I've got one like that!
My Dad had it given to hm back in the 1950s, when it was covered in years of crud and pretty dilapidated. So I'd say, definitely pre-WWII. The plywood disc is attached with 6 bass nails diven into the edge of the pot. The spacers were Bakelite (or similar material) and about 1/8" thick.

Dad and I got the thing playable and presentasble in w 2-generation restoration project, and I play it with nylon strings nowadays. I don't notice much difference between playing it with and without the back - but then, I'm the player, not the listener! But I reckon that plywood disc is going to swallow less resonance than my belly would, if the back were open!
I had no stability issues when I played the banjo without the back for a while.
Cheers,
John

Here are a couple of pics: 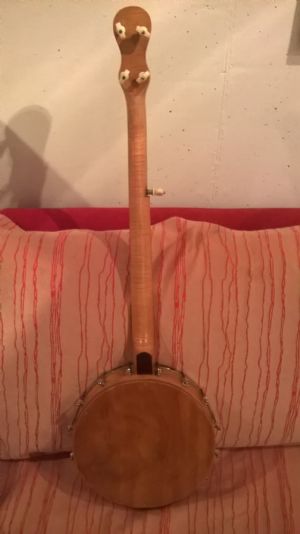 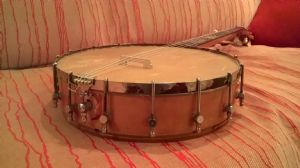 I recently bought an old brass resonator and mounted it onto 10 3/4" antique banjo. It's a flat disc of brass and does wonderful things for the sound of the nylon strings. I agree with the idea of experimenting with different materials. Don't limit yourself to plywood. 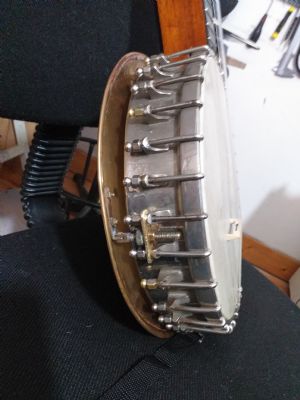 'I Can't Help Falling in Love With You' 1 hr

'How about a paper mache resonator?' 3 hrs