Today is Ralph Stanleys Birthday. His hard driving machine gun style is the reason I learned to play the banjo. So in honor of the day I am posting one of my old Ralph tabs that I already have on the hangout. Its called Shamrock and is a great number that should be a parking lot fav. Jason Davis covered it on his CD .Heres a link to a great instrumental album Ralph did .its got shamrock on it.
youtube.com/watch?v=OWA5So3Y1m8 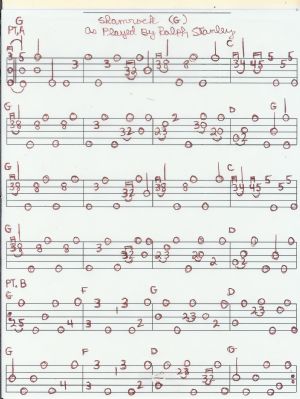 Truly one of the greats.

It saddens me that the era of ralph stanleys incredible banjo playing ,together with his lonesome mountain voice is gone .one of my favourites ralph sang was daddys wildwood flower .a lot of todays bluegrass music sounds mostly similar , makes me appreciate players like ralph ,and a few others more .

So glad I got to see Ralph over 2 dozen times over the years.

I saw the Stanley Brothers in '63, I was only 6 years old, don't remember much about the show, except that it was in a high school auditorium, outside of Charleston WV.

My Dad, Papaw, and my uncle were big-time  Stanley fans, and that was my first live Bluegrass show.

Went to every Ralph show i could over the years, especially the festivals at Cox's Field, Walker WV in the late '70's - early '80's.

Saw him at one of the ?entucky Fried Chicken festivals in Louisville KY, I think in 1982.

Ralph was friends with The Bluegrass Mountaineers, a family band based here in Akron, OH, fronted by Ed "Beanpole" Efaw and his son Larry Efaw. The Efaws brought Ralph up here for a couple shows in the '80's, playing small venues. It was at one of these shows, at the Norton Volunteer Firemans Bingo Hall in Norton OH, that I finally met Ralph, shook his hand and talked to him for a couple minutes.

The last time I saw Ralph perform was at the Kent Stage, off campus from Kent State University, here in NE Ohio. Ralphs health and stamina were getting real bad, and I believe he quit touring about a year later.