I thought Iâd make a thread about a custom build Iâm in the beginning stages of arranging. The final result will be a 5-string banjo tuned CGDAE. So, basically either a tenor banjo with a low C, or a cello banjo with a high E, it doesnât matter how it looks. Iâd be tempted to call it a baritone banjo if Gold Tone and Bela Fleck hadnât already collaborated on their own baritone banjo idea.
I have a good friend that is a luthier, and has built me instruments before, and heâll be doing the neck. However, he doesnât have a lathe, so my current plan is to get the rim built by a different luthier. Iâve already exchanged a few emails with him. I was initially thinking Iâd do a 12â rim with a tone ring, but my friend thinks I should go for a larger rim since weâre dealing with notes in such a low register. So, Iâm thinking 14â without a tone ring, likely maple. The banjo maker also does internal resonators, so that will be part of it, and Iâm thinking walnut for that. Hardware will be raw brass from Balsam Banjoworks that Iâll just allow to develop a natural patina.
Some things I need to decide still include scale length and nylon vs. metal strings. A fanned fret design isnât out of the question, either... heâs done them before on guitar builds. Iâm really not sure what the shortest practical length would be to avoid floppy strings, but Iâm sure that the 19.75â scale of my current 17-fret tenor is too short. There will definitely be a learning curve as Iâll need to adapt to a larger scale. If I go multi-scale I think that itâll go from 22.5â to 24.5â, which is the scale of a typical 19-fret tenor and the scale of Gold Toneâs CEB-4.
Does anyone have questions, or advice/recommendations regarding things I should avoid or take into account? Iâll update the thread as the build progresses, assuming thereâs interest.

I am also in the planning stages of making a baritone style banjo. I have a couple of thoughts.

One, concerning the rim size and the internal tone ring, I believe there is a size threshold where the cost benefit of bigger = deeper / richer low end starts to diminish and I would put that at just about 12-13 inches. Also, I have an internal tone ring 11" banjo and love it. That said, I think the internal ring adds to the sustain and the cello banjo is likely to be sustain heavy, just a thought. Might consider making the internal resonator removable. I have made a few of those and its nice to have the flexibility.

My other observation is that folks new to cello banjo have said that they had to get used to playing closer to the bridge to get clear note separation (also a concern with >12-13" rims). You might do a deep dive into how different scales from bridge to nut will locate your bridge. My understanding, for example, is that a short scale with a large put will pull your bridge closer to the center of the pot, which might mean plunkier tone and, perhaps, muddier note separation. When I build mine, I think I will go for a scale that puts my bridge a bit closer toward the tailpiece to try and clarify the tone a bit.

I posted a complete building plan for a cello banjo a while back that I did in CAD for a fellow builder that was building a series of 5 cello banjos.

One thing that I found rather shocking was what he had to pay for 14" Renaissance heads.  They were $80 each, so that might factor into anyone's decision to build the larger pot size.

I was planning to use a Renaissance head. I really would prefer goat skin, but even if I could get a pre-mounted in that size I worry about tuning stability on such a large rim. Itâs a little surprising that Gold Tone doesnât sell any 14â heads individually. Honestly both comments here have me re-thinking 14â altogether.
I might go with 12â after all, because clarity and note separation are very much something I would want. Plunky is great for clawhammer, but this will be an all-in-one for Irish and classical music. And even though my current tenor has a Balch head and is openback, this is more to get it in a âmiddle on the roadâ range, in between plunkiness and the assault rifle sound that can make a tenor easily become overbearing when using a mylar head and a resonator.
Going back to 12â opens me back up to being able to use a proper tone ring, as well. And I can (more affordably) test both vellum and Renaissance heads to see how each does with this.
Thanks for the comments, David and Rudy, youâve both given me stuff to think about here.

Oh yeah, David, do you think that an internal resonator would be a concern at 12â? I donât think that Zachary Hoyt (who Iâm planning to get the rim from) makes his removable, but I can certainly double-check with him on that. On one hand, I do want good sustain for slower classical pieces, especially if itâs something with longer notes meant to back up a violin melody, but on the other hand too much sustain might make faster passages muddy. And itâs almost all fast stuff when it comes to Irish music!

I believe that anything over 12" is custom with Remo and yes, like $80. I just bought one from Smakula for my large pot Orpheum. I wonder if there is a standard 14" drum head that could be used and is more affordable, just thinking out loud.

benhockenberry has been borrowing a Gold Tone cello banjo and has played some Irish with it. He might be of some regarding the head size. I would be curious if the 14" head has enough volume and punch to be heard at a session without a tone ring.

youtube.com/watch?v=1lPqXknXISQ Sorry can't tag Ben and give a live link.

14". Specs for the Gold Tone CB are available at goldtonemusicgroup.com/goldton...ts/ceb-4.

14". Specs for the Gold Tone CB are available at goldtonemusicgroup.com/goldton...ts/ceb-4.

Thanks! The other forums I visit allow for succeeding a URL with a sentence-closing period without including it in the linked string. Feature request for the siteowners? Here's the correct link: https://goldtonemusicgroup.com/goldtone/instruments/ceb-4

Oh yeah, David, do you think that an internal resonator would be a concern at 12”? I don’t think that Zachary Hoyt (who I’m planning to get the rim from) makes his removable, but I can certainly double-check with him on that. On one hand, I do want good sustain for slower classical pieces, especially if it’s something with longer notes meant to back up a violin melody, but on the other hand too much sustain might make faster passages muddy. And it’s almost all fast stuff when it comes to Irish music! 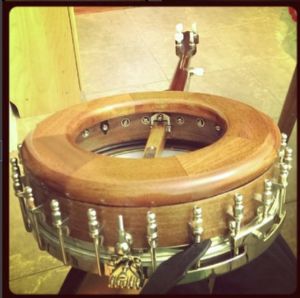 'Shaping outside of resonator with a router' 37 min

'Support For Musicians During Covid-19' 1 hr