The roofer stopped by to do some caulking today, and wanted me to look at a banjo his brother owns. He was hoping Iâd be able to tell him what it is worth, but 4 string banjos with heavy resonators are not my specialty.
The front of the peghead says Vega, and the back says Martin. It looks modern to me, but again, Iâm not sure. I took the resonator off, and there is another Martin stwmp, with the number 138 underneath it.
I took some quick photos before giving the instrument back to him.
Any ideas how old, or how valuable? Thanks. 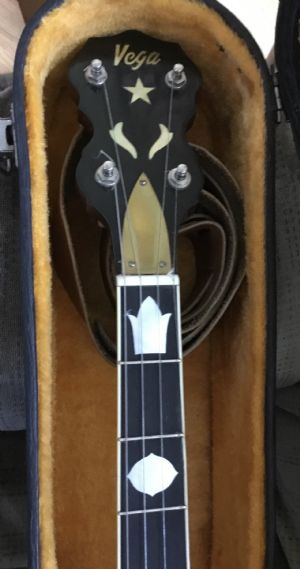 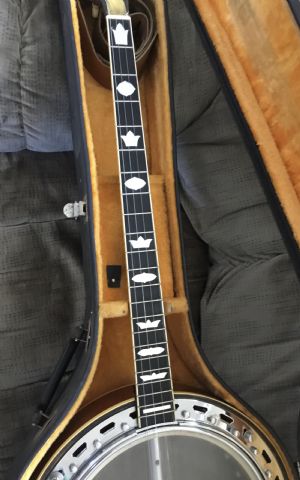 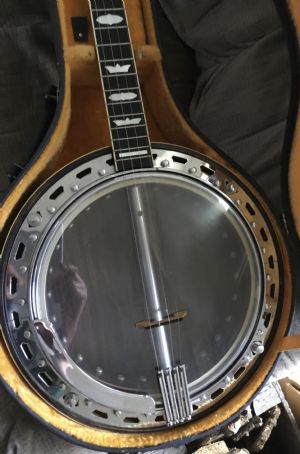 And one more photo 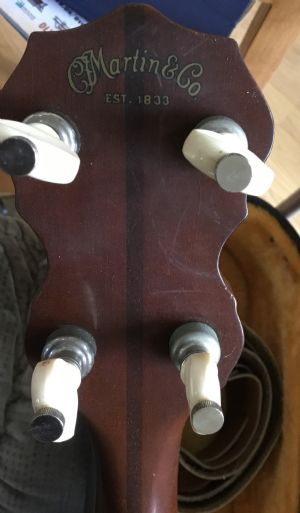 I'm not an expert on Vegas, but the C.F. Martin company bought Vega Banjos in 1970 and continued the Vega line from there. That's why you find both names on that banjo, which happens to be a plectrum banjo (four strings and 22 frets.) If I were you, I would contact Vinnie Mondello with your pictures. https://www.4stringbanjos.com/  You should also take a photo of the resonator and then take off the resonator and look on the inside of the pot for a serial number.  The serial number will help date its manufacture.  It's a very fine instrument and looks to be well cared for.

I can't easily find a serial number list on the net, but the apparently the first Vega/Martin banjos continued to use yellow Vega labels and serial numbers for a year or two. Martin purchased Vega in 1970 and moved production to Nazareth in '71 or '72.

My guess is that the banjo was made in Nazareth, and the low number would suggest early Nazareth production, probably before 1975.

You could email Martin and see if they can dig up a date for it.

There's not much to compare it to on the web. There are "sold" listings for somewhat similar tenor and plectrum banjos on Reverb with asking prices of about $550 to $1000.  I would tend to think that the banjo with the $1000 asking price sold for less than full price.

I took Omeboy's suggestion, and contacted Vinnie Mondello. Here is his reply:

Jim
That is a 70s Martin-Vegavox 1 in plectrum.
Vox is still somewhat popular, but 4 string is waning fast in that realm.
I have paid 700-1200 over time, in my shop.
Vinnie Mondello
4stringbanjos.com/

I love Vega banjos when theyâre set up right and the set screws and air gap are removed from heel adjustment duties. You get a nice wood to wood contact and they come alive, and you realize how greatly undervalued they are as bluegrass style banjos. It truly is a night and day difference that is easily reversible.
The Allen screw heel adjustment does provide great adjustment simply and quickly but at the expense of heel to rim contact necessary to transfer what I prefer to hear in scruggs style picking on a Vega.
So, Iâve often pondered buying one of these Vox style 4 strings to put a conversion 5 string neck on. But I fear the extra depth of the resonator to flange ratio would approximate the Gibson built Montgomery Wards line of prewar banjos. I converted a Gibson built Charles McNeil prewar tenor to 5 string neck, and eventually swapped out the extra deep prewar Gibson built resonator for a standard depth resonator. The tone was then more focused. With less reverberation type tone.
An actual vox style pot assembly 5 string, which I think they made some of, would surely be more than Iâd care to spend. And, a neck isnât just laying around handy to experiment with, and would be a fairly expensive proposition, considering the vox heel cut would be different than the other Vega pot assembly hardware. So, you canât easily just buy a cheaper RK used neck or whatever and throw on.
If anyone who plays bluegrass on a stock 5 string vox pot style Vega can comment, Iâd love to hear their thoughts on its tone and volume and response rate and so forth.
The only thing hurting your value is the fairly low market for a 4 string anymore. Iâm sure the guys buying those, when they came out, were older guys then. And the style diminished. Same with clawhammer style playing and open backs. It had about died out, but thankfully was brought back stronger. Iâm unsure that will ever happen as much for stock 4 string banjos and styles, that it will have a resurgence like old time styles did. There used to be old clawhammer banjos hanging with the 12 string guitars in every pawn and gun shop around here. Not anymore. I think clawhammer and various older styles thatâd nearly became extinct are back to stay. And Iâm glad.

'Open Back Banjos vs. Closed Back Banjos, Which One to Get as a Noob?' 1 hr

'Shaping outside of resonator with a router' 1 hr

'Support For Musicians During Covid-19' 2 hrs