I play claw hammer and want to learn Irish tunes so today picked up this banjo from a estate buyer who thought it was neat. It is dirty and a little rough but straight as an arrow and all the parts are there.He wanted $ 240 but took $ 225. Probably too much but it will fun to clean up and play. It is a Queen with a V shaped neck. The worn down part on the neck shows clearly birdâs eye maple. Might be veneer. When was it made and did I get hosed? I want to shine up the metal....if any chrome was on it , it is long gone... and gently polish the back which I guess is painted..possibly inlaid. Any ideas? Thanks, mark 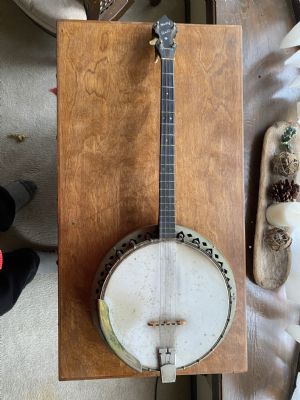 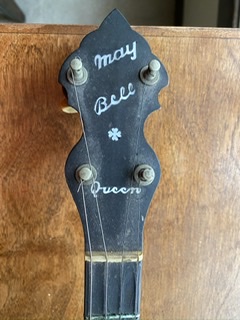 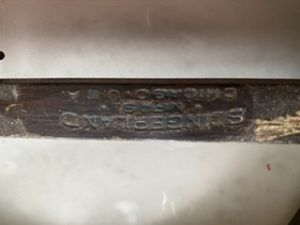 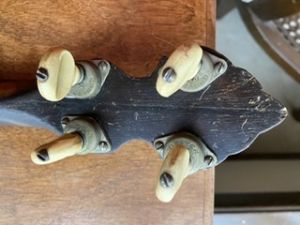 You may have paid as much as it is worth but I don't think you got cheated. It looks to be solid even if it is a little dirty. With a good cleaning you will have a decent player that is a lot better than anything you could buy new for the same price. Slingerland banjos were beginner to intermediate grade instruments but were built very well. Many of them are still in good playable condition after ninety-odd years. Yours was probably made somewhere in the late twenties or the thirties.

I don't think a neck would be veneered....so the birdseye is probably real.

Slingerland was particularly fond of birdseye maple and used it in many rims and necks, even on their cheaper banjos. They used rosewood in their higher-end instruments (and they did make pro-level banjos, just not nearly as many) but the only veneers they used on necks were plastic. The Queen model was one of the cheaper May Bell models throughout the '20s; stylistically, yours is probably from the second half of that decade. Earlier ones had friction tuners and later ones had a celluloid peghead veneer. The hardware is nickel, not chrome, and while it's heavily oxidized, it's still present on the parts.

I also got one at an estate sale,there's a few pics. Mine has lived in a case it's whole life,it had the presto like yours but friction tuners.After I strung it up I realized it sounded really good so I had a Rogue neck mounted,and put John Hartford guage strings on so I could low tune it. I love it! 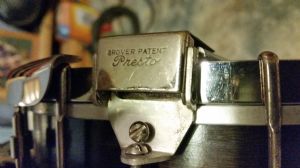 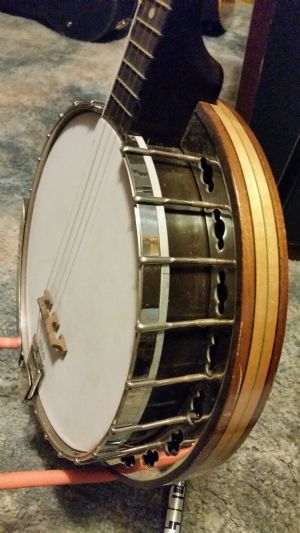 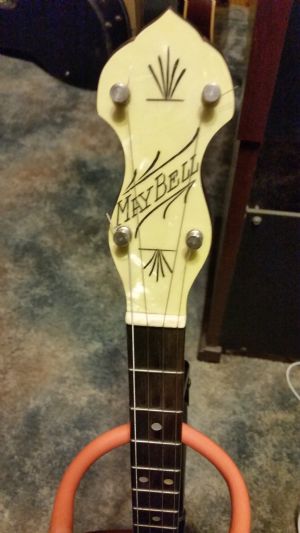 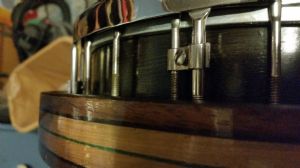 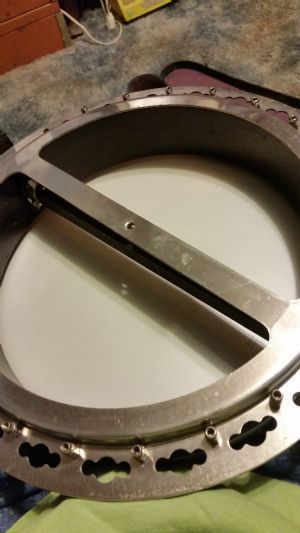 A decent enough banjo. It should sound fine; most Slingerlands do. The back is probably not inlaid, but has a fancy decal imnstead. Be careful polishing that.

One thing you will notice is that Slingerland banjo have rather narrow necks. It can be fairly easy to pull the strings off the edge of the fretboard. Back in the twenties, many banjos used a brdge with narrower slot spacing, which helped that issue.

I do notice that the fret board is narrow. I have large hands

I had an original 5 string that George Gruhn said didn't exist. The fretboard was quite narrow as was others that I have seen here. However the sound was excellent for clawhammer style, even with a 10 3/4" pot

I have a cheap 5-string Slingerland that sounds fine for clawhammer and is loud! The narrow neck and friction tuners are the only problems with it.

That is a nice looking may bell

As an Irish trad player and Slingerland fan, my comments are posted to your post over in the Irish playing forum.

I shot a video yesterday,here's what my low tuned Slingerland sounds like. I call it my poor man's John Hartford banjo. 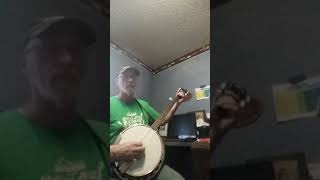 VIDEO: Too old to die young
(click to view)

'Jim Mills Tuning for Will You Be Satisfied ' 1 hr