It can be funny listening to people sing the wrong lyrics that almost sound right, but are using wrong words.

Having watched The Country Gents many times , they would purposefully change lyrics to add to their clowning around . I sure do miss them .

What is even worse is to be singing/playing one tune, and inadvertently switch over to another tune. Happened to me the other day on the banjo. Some darn tunes sound almost identical.

When I was working out a banjo arrangement of Gene Autry's "Back In The Saddle Again", I found an interesting lyric for the song on an Internet site.

"Where the longhorn cattle feed on the lowly gypsum weed".

I hadn't known that drywall was an organic, plant-based material.

The Nitty Gritty Dirt Band's recorded version of Jerry Jeff's Mr. Bojangles included the line: "And the smoke ran out," in place of Jerry Jeff's "And he spoke right out."

I saw them opening for Willie Nelson a few years ago and they sang the correct words.

Joan Baez: "There goes the Robert E. Lee." Don't know the difference between the general and the river boat? Same song: "'Til so much cavalry came and tore up the tracks again." It was Stoneman's cavalry. The Night They Drove Old Dixie Down

It can be funny listening to people sing the wrong lyrics that almost sound right, but are using wrong words. <snip>


...guess it depends on who's in charge of deciding right/wrong.  I don't see that it's a given that the "conventional" wording is perfect, or the best, or without room for improvement.  If/when I think I can do better, or it simply makes more sense to me, I try* to change 'em up, or add a verse.... but not to worry, so far my audience (?) consists of me and my wife.

* = I say "try" because my facility with words/cadence/meter isn't always top-tier....  it can take several months, or even more, and in those cases, my wife isn't included in the audience.

Known officially as a Mondegreen.

I was both shocked and humoured a few times as a young kid when I finally bought a single with lyrics on the sleeve and realised I had been singing completely different words in my head to a song I liked on the radio.

There's actually a name for this: "Mondegreen". There is an old Scottish song that famously was collected as:

They have slain the Earl of Murray
and Lady Mondegreen.

Historians and folklorists searched high and low, but could not identify the slain Lady Mondegreen.  Finally someone discovered the original version of the words:

They have slain the Earl of Murray
and laid him on the green.

And ever since this sort of misinterpretation has been known as a mondegreen.

My favorite is a triple mondegreen from "Brennan on the Moor":

Does anyone have a quadruple mondegreen?

When Randy Bachman (the Guess Who, Bachman Turner Overdrive) started his Vinyl Tap show on CBC Radio, he did one show on Mondegreens. That's two hours of songs that folks often get wrong: "'scuse me while I kiss this guy", "there's a bathroom on the right".

A little off topic, but sometimes, my husband's odd hearing is useful.

Once we were driving down the road, I noticed a car and said, "That old car has seen better years."

Hubby thought I said, "That old gal is worn to tears."

He said, "You're right! We should go help her!"

I thought what is he talking about? Well, while I was looking right at the car, he was looking left at a woman walking down the road. We turned about, stopped and asked, and sure enough, she'd gone out for a jog, twisted her ankle and was hobbling home. She got in the car, we gave her some water (she was dehydrated,) and we drove her five miles back to her house.

Later, Hubby said, "I'm sure glad you said something, or I would have passed her up."

To this day, I have never told him what I really said.

I got many song lines wrong before I could look them up on the internet (where many are still wrong). These include that "bathroom on the right" from CCR!

And from a brief pop hit, The Eggplant that Ate Chicago.
"If he's still hungry, the whole country's doomed." I heard and sang, "He's still humming that good old country tune." That's a second reason to watch out for that eggplant.

The mental image of a guy hunting groundhog with an axe still makes me chuckle.

In the song Little Mountain Church House, I was hearing "I first heard the words to make my life a home" which made no sense; then I looked it up and found "to base my life upon".  Duh!

I guess that's why they call it doubloons.

"Mine eyes have seen the glory of the coming of The Lord! He is trampling through the vintage where the caves of rattlers snored."

And I, age five or so, thought it quite WISE of Jesus to wait until they were asleep, before helping His mommy stomp on their heads, as she was depicted doing in the religious art. 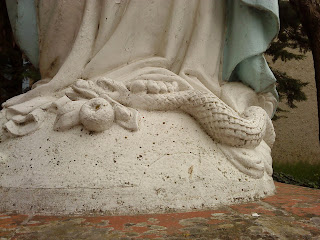 One of the hardest things to do is to transcribe off a recording. A lot of mistakes happen when pronunciations are difficult, which is the case above. Countless times I have replayed a phrase over and over and over to determine exactly what is being said, yet still get it wrong. The good thing about the internet is one can research lyrics and be reasonably certain of the accuracy.

banjonz Some truth to what you say about the internet accuracy, but sometime's it's off with both lyrics and chords. I looked up the lyrics to Woody Guthrie's "Pastures of Plenty" a while back. I found this lyric:
"It's a mighty hard road that my poor hands has hoed."

Of course we don'e hoe "roads." We hoe "rows" in fields. So I always check several postings of lyrics or chords. Then (confession time), I make a few changes in the lyrics if I feel the need.

From "Sail Away Ladies"
I love my daughter, but it ain't no use

One lady used to sing chorus to "Poor Orphan Child"
Sailor lead me by the hand...

And there's purposeful lyrics about a boatsman coming to shore, looking for a nice oar; which easily gets misheard.

There was a book full of misheard popular songs; IIRC called "'Scuse Me While I Kiss This Guy"

We had a band member who introduced the Daniel Lanois song  Under A Stormy Sky.
She sang the lines:

I hear the teenage appeal.
The diesel turning,
Calling you and me
To the city of steel,

I told her that it made no sense.  She said she knew, but assured me that was what he sang on the record.  When she brought the recordover to my house so I could listen (This was before the popularity of Google.) I listened and heard:

I hear the T. H.& B.
The diesel turning,
Calling you and me
To the city of steel,

Not being a rail fan and never living in Hamilton (the city of steel) as I (and Daniel Lanois) did, she had never heard of the T. H. & B. (Toronto, Hamilton & Buffalo) railroad.

A friend of mine said he once heard a young woman sing this line from Hotel California:

The girl ran off with somebody's elf and the taverns took all my pay.

Listen to the murmur of the antelope sneezes

Elvis must have gotten tired of the lyrics in the song; Are you lonesome tonight.
Do the chairs in your parlor seem empty and bare? Do you gaze in the mirror and wish you had hair?

The song "I've Lived a Lot in My Time" has long been one of The Dry Branch Fire Squad's most popular numbers. The chorus starts out, "I fought the grim reaper down in the dark valley," but I recall at least one live performance where the last time around Ron Thomason (deliberately) sang, "I fought the dim peeper . . ."

'Were You There When They Crucified My Lord?' 3 hrs