We are hosting an Early American Banjo gathering. The committee for this event are John and Elaine Masciale, Tim Twiss, Al Smitley, and Andy Chase.
At the end of the last gathering there was a lot of interest in continuing with the gathering, but we needed a new venue. After a lot of searching we are pleased to announce that Renfrew Museum is willing to host us.
Our goals are:
1. To educate about and create an appreciation for the early American banjo, its musical repertoire, and its role in American history.
2. To develop and foster fellowship and camaraderie among players who are often isolated geographically. This fellowship creates increased opportunity for conversation and mentorship.
3. To welcome and mentor new players.
4. To be a resource for players for sources of music, instruments, and accessories.
5. To provide a cost-effective, impactful opportunity for players of early American banjo.
6. To have fun. Lots of fun.
Based on this event we hope to plan future events.
Come join us!
Time: June 26, 2020 at 7pm to June 28, 2020 at 1pm
Location: Renfrew Museum and Park
Street: 1010 E Main St
City/Town: Waynesboro, Pa
Website or Map: https://www.renfrewmuseum.org…
Event Type: gathering

Come and join us in this new age of discovery! 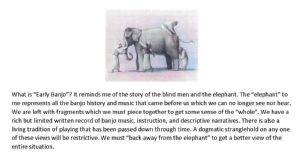 We have solidified two of our speakers for the event. Their presentations will cross over into all levels of interest and participation.

Pete Ross is a banjo maker, researcher, and musician. Pete is one of earliest contemporary makers of gourd banjos, making instruments that range from those of his own design to exact replicas of historic instruments. Pete began making banjos in the 1990s at the School of Visual Arts (SVA) in New York City and then apprenticed with Scott Didlake of Mississippi. His reconstructions of eighteenth- and early nineteenth-century banjos have been featured internationally in museums, art galleries, movies, documentaries, and live performances, and are owned by notable Old-Time musicians such as Rhiannon Giddens and Bob Carlin. www.banjopete.com
Kristina Gaddy's writing has appeared in everything from The Washington Post, Baltimore Sun, Atlas Obscura, and OZY to All Frets, Banjo Newsletter, and The Old-Time Herald. Her first book Flowers in the Gutter: The True Story of the Edelweiss Pirates, Teenagers Who Resisted the Nazis immerses the reader in the world of these teenagers as they resist the Third Reich. Her forthcoming book Well of Souls: Searching for the Banjo's Lost History is an exploration of the little known history of the banjo in the Americas, its role as a a spiritual device in the hands of enslaved Africans, and the instrument's legacy in today’s culture and society.

---------------------------------------
Skeffington Flynn has had a lifelong fascination with music and rhythm. A favorite family memory is of Skeff as a toddler beating on pots and pans while proclaiming, “I’m making a lot of noise!” Forty some years later he is still much the same person. This fascination has led him to develop his voice, and to study a variety of instruments over the years.

Skeff has performed in numerous ensembles to audiences both large and small, always for fun, sometimes for profit. He has shared his knowledge and love of music both as a private instructor, and in public workshops. Skeff holds a Bachelor of Science Degree in Music from Towson University.

In 2009 a request to lead a Spoons workshop for the students of Rosemont Elementary School in Martinsburg, West Virginia led Skeff to discover the Rhythm Bones. You might say it “clicked” for him and a new journey had begun. He found kindred spirits in the Rhythm Bones Society to help him along his way and has been serving on their board of directors since 2011.

A self-proclaimed “Bones Ambassador”, Skeff has given countless bones workshops, performances, and demonstrations. These include such venues as the Antietam Early Banjo Gathering, the New England Folk Festival, the Texas Folklife Festival, the Alamo, the Baltimore Museum of Art, and Shepherdstown, West Virginia where he served as host and organizer of Bonesfest XIX.

At this year's Early Banjo Gathering Skeff is excited to interact with bones student's of any skill level. He relishes the opportunity to be able to guide anyone with an interest along their musical journey. Whether you have picked up the bones before and need help getting to the next level, have never held the bones in your hand and are looking for a place to start, or are just interested to know a bit more about "the clicky things", Skeff promises to be available and present as you move forward along your musical path.

Unfortunately, the Early Banjo Gathering originally planned for June has been cancelled. It will certainly be held next year in the same location.

'RIDE of the VALKYRIES on BANJO' 2 hrs

'Vintage National Circle 8 Finger Picks before they starting putting USA on them.' 2 hrs