Growing up we regularly ate for breakfast leftover cornbread, which gets hard by the next day, crumbled into milk. It is a taste from my childhood that I still recall fondly and was wondering if this was a Southern thing or just my family thing? Now, in my family, my grandmother made cornbread---AND biscuits---almost every day of the year. And she made plenty, so there was always leftovers on a plate in the kitchen. She preferred the hard leftovers, crumbled into buttermilk, above most other dishes, just loved it. I never acquired the taste for buttermilk but loved having this as a breakfast cereal with whole milk, served cold. Her cornbread came from an iron skillet cooked in either lard or Crisco, with a near-black bottom crust, and quite salty. We never used a bowl for this, it was served in a drinking glass to help hold it together, so a long spoon was handy for digging it out. Anyone else ever know of this?

Same in Texas for my family. Grandmother would make cornbread and the leftover either that night for dessert, or the next day sometime...we'd put into a bowl of milk and sprinkle with sugar over top. Just a regular old cereal bowl for us, no tall glass. I haven't had it in years...a childhood memory I need to relive soon!

My 97 year old grandmother still enjoys a glass of buttermilk, as did my grandad...as do I now. Fresh quality buttermilk is actually sweet and pretty dern refreshing. Most of the stuff at the store today is not the same, tastes pretty gross.

Growing up in west-central MB, we called it "Johnny Cake" [at least I assume we're talking about the same thing].   We ate it out of hand [i.e. a piece of cake] with or without butter, or broken / cut into cubes (?) and  smothered (?) with corn syrup.... always as a dessert.

Now we're more sophisticated * and have adopted "cornbread" as the name, but it's still only a dessert or a snack.  For me, fresh is A-1; letting it "mellow" for a day or two makes it A-1+ but it never gets the chance to go hard.

And P.S. Dow... I haven't tasted fresh buttermilk for probably 60 years.... I like what I get at the store [a liter lasts a day if I take it easy].   Maybe it's like when our kids were young... initially they believed tomatoes were supposed to taste like the store bought [pinkish, hard] ones and that fish was supposed to taste like Capt. Highliner (TM).   But, I happily report that they all came to their senses.

I made Johnny cake once. My wife came home and said ,â what the hay is THAT!â. My mother-in-law said âwell done.â She always did love me best....

Years ago, I got a little cookbook from Tabasco. I use the corn bread recipe in there. But, I can't face Tabasco in my food for breakfast. I'm inclined to add a big slather of molasses. Thanks to all for giving me an option for the day-old bread.

Ma called her cornmeal fritters âJohnny cakesâ or âhoe cakesâ. Sort of a little fried corn hotcake. She said they got the name âhoecakesâ from olden times when slaves would cook these on their hoes over a little fire. Wherever theyâre from, or whatever theyâre called...theyâre dang tasty! Fried in butter and smothered in sorghum or cane syrup! Mmmm...mmm

Owen, it is my understanding that johnnycake is an unleavened cornmeal flatbread and that "cornbread" uses baking soda or self-rising cornmeal, and usually some wheat flower. Johnnycake could be cooked on a flattop, like a pancake, but cornbread requires a pan.
I like both! Because what I grew up on was salty and savory with a coarse texture I have always disdained the sweet cake-like forms of cornbread. But, if someone calls it a "corn muffin", then I enjoy the sweet version! No logic to that.

The recipe I found had me bake it in a pan,, not fried , and was fairly sweet.

Love it! We did cornbread and buttermilk growing up in Louisiana. I have not had it with sweet milk. A lot of people don't like buttermilk. My wife can't stand buttermilk but likes cornbread. Have my mommas recipe but usually just get the Martha White Gladiola mix at the store. 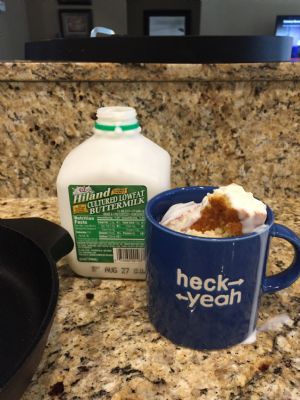 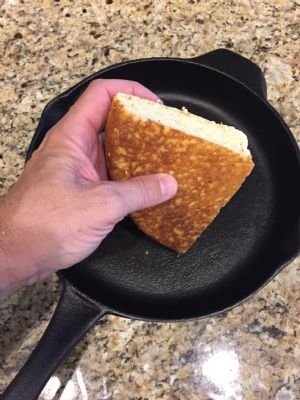 ^^That is a proper cornbread skillet.

Terry makes cornbread in the cast iron. I've posted my Hoppin' John recipe on here before.

We don't see buttermilk in these parts. I've never had it. Whenever it shows up in a recipe I just use homo. Ha! Ha! I said it. They say to add vinegar or lemon to milk for a substitute. That don't sound right.

They had bags of turkey wings & legs on sale here & I didn't buy any & now I'm kicking my butt, It's been pouring rain for weeks & we're getting ready to switch out our small freezer for an upright fridge & freezer.

I've cured & smoked legs a few times. a doz. in a bag. Great in a pot of beans or eat it like a Neanderthal standing in line at Disneyland.

I found a saved recipe for stuffed Cajun turkey wings. Stuff them with the Holy trinity before stewing them down in their own gravy in a dutch oven for a few hours. Serve on rice.

Never had it in Montreal, which shows the regional nature of food (ever eat mille feuilles or tourtiere?). Not in Toronto either, but a mmmarvelous mmmuffins* franchise opened up near us and I'd go for a cornmeal muffin.
*The company has folded.

Then again, I never heard of spoon bread until I had some at a nice restaurant in Charlottesville, Virginia, on a trip with my parents in '62. I tell people here about it and they scratch their heads in puzzlement.

One of my all time favorite recipes is an old civil war recipe for âSpider Cornbreadâ...I may have given it here before. Right at the end when everything is mixed and ready to go into the oven, you dump/swirl in cream and donât mix it...bake it that way. It gives it a buttery custard on the inside...

...  we're getting ready to switch out our small freezer for an upright fridge & freezer. ...

Careful, Bob. When we moved into this house we bought a fridge with the bottom freezer. The wife hates it. You pile the stuff in and then have to root through everything to find what you're looking for. Things slide around or fall out, and sometimes you need to rearrange stuff just to get it closed.

In Toronto we had a side-by-side fridge and freezer, which worked well for us. Everything in its place. We didn't bother to get the one that makes ice or pours water - too much wasted space. Unfortunately, we haven't seen one like we had in T.O.

The best bottom freezer design is a pull-out drawer where you can access contents from the top.

The best bottom freezer design is a pull-out drawer where you can access contents from the top.

That's what we have. We found it much easier to find things in the side-by-side. Your food is on the shelves. You don't have to pull stuff out to find something on the bottom.

We're keeping our regular kitchen fridge but getting that type as a secondary man fridge to replace that black hole frozen soup from hell box! It's 3 feet deep & 2 feet square at the top. You have to stand on your head to see what's down there!

I need to step up my bacon, corned beef pastrami game! I can brine up top & freeze some below.

It's pretty basic, You soak some pork or beef in salty, spicy water & smoke it!

'We used to do Post-a-Thons around here' 3 hrs