Go ahead and Stuff it!

I read a lot of the "stuffing" methods on the forum, but the most consistent one
is the one about the "Towel" method and when I took My two month old Morgan
Monroe to get railroad spikes put on the neck. He told me to take a towel roll it up
and put it between the adjusting rod and the head. I was concerned when I
started to try it that you just can't suspend it there very well. I took a face towel
wrapped around the adjusting rod tied it in a few places with twine to hold it on.
I carefully screwed it back together and yes it works. It sounds warmer but just
slightly, sweeter, a little less bright and anything else extraneous sort of disappeared.
The other thing I did previously was to adjust the tailpiece making it lower. That got
rid of overtones, some sustain and spurious crosstalk. Just right!
My Luthier Precision Guitar Works is a character when I came in he was working on
an Irish Elbow Bagpipe and later in our conversation he showed me a old Gibson
Mastertone copy that he built from a kit many years ago. It weighed more than an
original Mastertone.

You might also try a couple of clothespins on each side of the bridge. That tones the sound down somewhat. Or, a piece of styrofoam underneath the strings behind the bridge will also soften the tone.

Me? I never wanted a softer, mellower tone, I wanted a clean, clear, loud sound that could be heard over those awful screechy violins and loud dreads (G)

For my openback Carver banjo: My stuffing is a washcloth folded over itself twice (making a square 1/4 the size of the unfolded washcloth). I make a layer cake: banjohead, washcloth, cardboard to fit the washcloth (cut from Cherrios box), strip of towel cut from a dish towel, 3/16" wood dowel. The cake is wedged in place with the dowel, which wedges between the strip of towel and the edges of the pot next to the tone ring. (my single coordinator rod is too far from the head to be of use for any "rolled towel" method). The amount of towel strip (i.e. number of layers) is adjusted so that the dowel stays in place, but does not press so hard on the cake that the head bulges. The cardboard keeps the washcloth from just flopping away from the head.

The advantage of the cake is that I can move it up and down the head (neck heel to bridge) to get the tone and amount of quieting that I want: max quieting when cake under the bridge, max sound when cake near the heel. Right now, I want max sound reduction, and cake is under the bridge - this also gives max plunkiness as the sustain is really curtailed.

It's really easy to move the cake, or remove it altogether, depending on what I want the banjo to sound like that day :-)

For my Stelling: I use a large pad to cover the whole head, along with 2 dowels, since I needed to really cut the volume on that banjo.

Also, the dowel makes a nice drumstick for tap-tuning the head. I've got a pencil mark 1" from one end to help me tap the same distance from the rim when head tuning.

This "stuffing" method would not work on a banjo with no tone ring since there would be no space between head and pot to accept the ends of the dowel.

Just another idea, hope it helps.

Sounds like you've got it right where you want it already. I enclose a photo of Bobby Thompson's banjo, when he gifted it to Rolf he said, "Don't you dare change the setup". LOL !!
t. 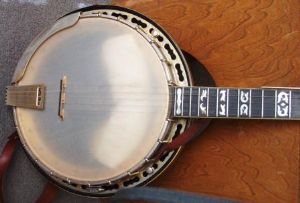 I didn't know any bluegrass pickers stuffed their banjo heads. WOW! I don't fully understand the practice in oldtime picking. Sure, some people want a plunky sound, or maybe a sound like and old 78 RPM recording.

I stopped putting stuffing in my banjo because it messes with the response. When I take the stuffing out, it takes about a week or so to get used to controlling my banjo. I have worked on dynamics a lot for volume control, and setup for unwanted overtones. I can't deal with the sound of clothespins on the bridge, it makes the banjo sustain way too much and the tone is very undesirable. Practicing picking softly, clearly and quickly has helped me to control the banjo a lot.

My banjos are set up for clawhammer, so they're stuffed to get rid of rather raucous overtones. I had a student bring in an old S.S. Stewart with a skin head. It didn't need any stuffing. But some nylon heads are lots more tinny sounding. I use upholstery foam wedged between the co-rod and head right up toward the neck. I think it matters more on the resonator banjo, which has an arch top tone ring. By tweaking the combination of stuffing, tailpiece angle, and head tension, I can get a somewhat mellower sound, that still has a ring to it. Hey, Lew, some of us don't want a clawhammer sound like an old 45, when nylon heads were introduced - which were really screechy.

'We used to do Post-a-Thons around here' 3 hrs