Hi I received this banjo from my dad. It was my grandparents before that. Can anyone provide any info on what type it is? 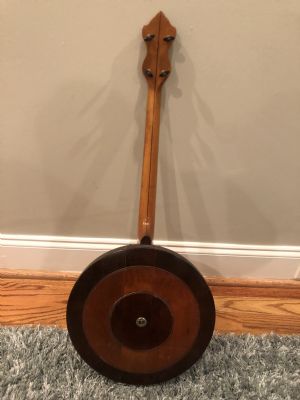 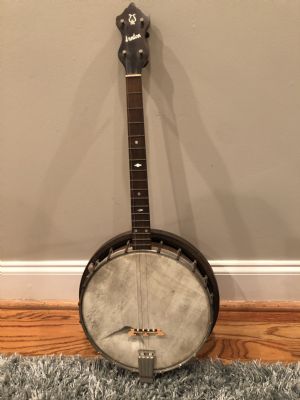 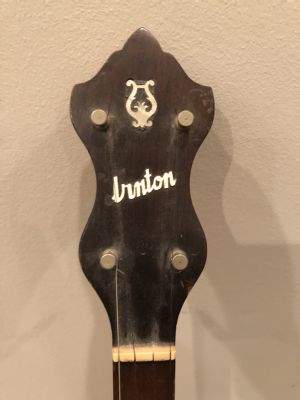 This seems to be a Stromberg Voisinet, c. 1920-30;s. Photos of the inside may reveal the maker to be Kay.

Stromberg-Voisinet is more likely than Kay.

And it's a tenor banjo. 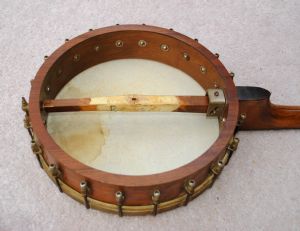 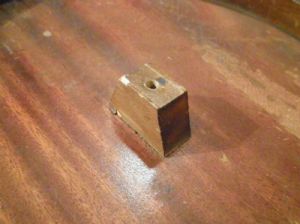 A SV from the '20s or Kay from the early 1930s â same company, different owner. 1930 was the ownership change

Even though Kay made both dowel and threaded rod banjos under the SV name before the move to the new factory around 1935, no one is wrong to call all the dowel stick instruments SV and all the threaded rod banjos Kay unless actually branded Stromberg-Voisinet as a few of the early '30s were.

The SV brand appears to have been retired around 1935. With the new factory, that makes as much sense as anything else we know 85â90 years later.

Hi the stick is no broken. No block.

This seems to be a Stromberg Voisinet, c. 1920-30;s. Photos of the inside may reveal the maker to be Kay.

Don't see any name inside. What is name on head? Looks like Irnton?

I was thinking that the construction of the pot & neck bracing system may suggest a maker. Distinguishing SV & Kay can be difficult on occasion.  Both these companies made sub contracted instruments  for distributors  with many different names.  ( ...can't quite read the name on your peghead). 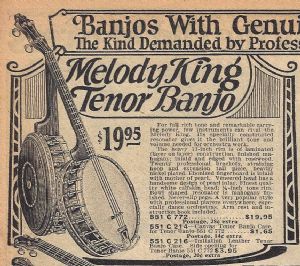 Thank you so much for the great info. I am bummed that I ripped the cover. Is this worth replacing? We don't play.

The banjo head is torn I see it now.
Plenty of people here replace banjo heads with ease.
Some use skin heads. Some use plastic.
I can do it but hate doing it. And I'm not really a fan of plastic heads on 1920's banjos.
Here's what I would try if you're not going to play it. Get some old fashioned white first aid adhesive tape. Pop the resonator again and come up from beneath the head with the tape and see if you can pull the head together and tape it underneath. See if you can get the look you want for right now maybe even with some tape on top. I don't know how well the adhesive tape will stick to the skin head. Might be okay,
Banjo heads were made to be replaced so you can't mess up your tape job and make the head any worse.  Someday that banjo head will have to go.

Actually, you can search BHO forums for repairing a torn skin head and you will find quite a number of useful ideas probably a lot better than my tape deal.

If you're anywhere near Milwaukee WI, I'm 20 miles north, and will replace the head for you.
New skin head won't cost you much, and I'll donate the labor.
But, if you're just going to hang it on the wall, the patch-from-beneath fix is a lot simpler.

If you're anywhere near Milwaukee WI, I'm 20 miles north, and will replace the head for you.
New skin head won't cost you much, and I'll donate the labor.
But, if you're just going to hang it on the wall, the patch-from-beneath fix is a lot simpler.

Thanks! Unfortunately I'm in Atlanta.

'Which head for an Epiphone Recording A' 1 hr