Includes video, mp3, and exhaustive description. Thanks to everyone who has given me input and help!

Feel free to get in touch with any questions and don't be shy to make an offer!

There was a discussion of one of these not too long ago. No one seemed to know exactly what it was.  The peghead looked like a Gibson RB-00 that had been monkeyed with. And I think it had that same type of serial number.  I can't find the discussion now. But your ad is a real education.

Greg Boyd has a Kalamazoo listed right now, with a youtube. Similar type of construction, I think. Greg's banjo sounds amazing, and I like his comments about the wood, the rim, etc.

I saw that video and found it enjoyable and instructive as well!

And yes this would be that same banjo with the funky headstock, I must have posted four or five threads on it during different iterations. (Dead horses sometimes do rise if theyâre beat long enough ha, but apologies for that.)

Hereâs a link to the sound sample for convenience, I think it showcases the play potential better than the video

And of note: to get in touch by phone youâll have to ring twice. (I get badly harassed by telemarketers and have to screen unknown numbers.) If you miss me please leave a message or text me with your number and Iâll respond shortly. Email always works too.
Thanks!

... yes this would be that same banjo with the funky headstock, I must have posted four or five threads on it during different iterations.

Thanks for confirming my memory!  I couldn't find that discussion to save my life.  I thought I had commented on it, but now I think I started to and then deleted what I was going to write.

Glad I did, because I would have been totally wrong!  I was going to guess you had a late pre-war RB-00 on which someone had reshaped the peghead to give it that decorative top. And I thought the lower end of the peghead had been altered.  I did not know about the Gibson-made Ward banjo that had this very peghead.

I'm sorry I'm not in the market.

Updated ad with new video! Have also updated to include a return policy!

Thanks for your kind input there Ken, much appreciated!

Just wanted to note that since I havenât had much interest at my almost-rock-bottom price Iâm going to raise my price here closer to what Iâm asking elsewhere. But Iâd encourage any Hangout members to make offers or express interestâIâd rather sell it here for less. Thanks again for everyoneâs help!

(Also note that I might relist soon in a way that doesnât downplay the poor thing so much. Iâm all about honest details but saying âfor better or worse,â for instance, canât help my case much! Ha.)

Itâs this banjoâs 80th birthday on the 28th of this month! It would love to spend it in a new home. I spruced up the ad and included some new pictures from my eBay listing below. Check out how nice the action came out! Itâs a silky player.

Make me an offer! 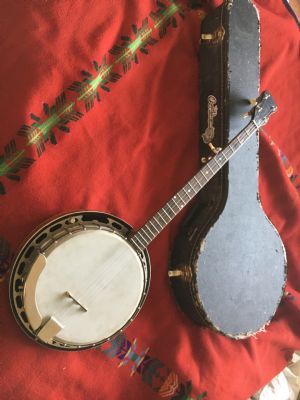 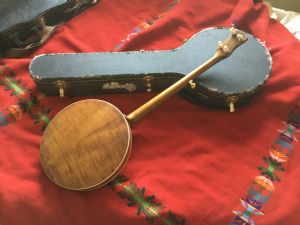 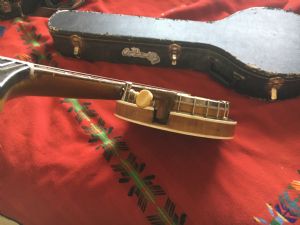 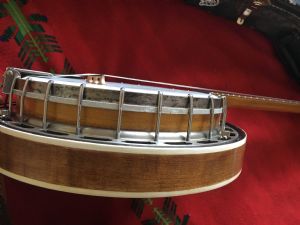 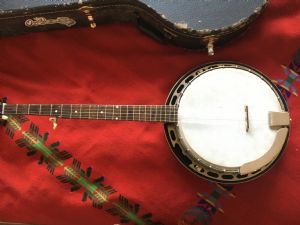 It's hard selling any instrument these days, but I bet if you put up a mint Style 18 with papers for
a $1 and free shipping, somebody would ask, " Is there any room on that price"

I'm thinking about your banjo, wish I could hear more of it.

i don't mean to hijack,but do you think this heavily modified plectrum neck I have has a very similar shape? I wonder if it was a wards banjo at one time. 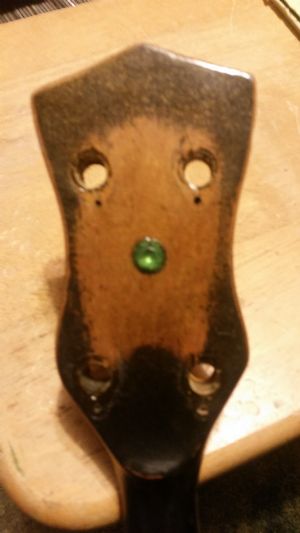 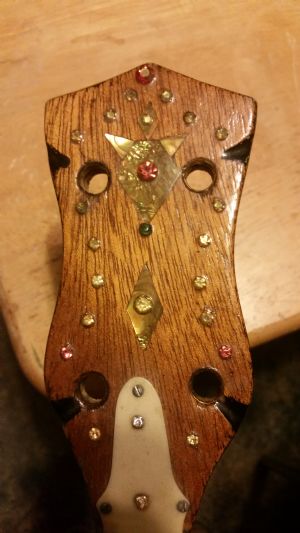 Ya know that shape does look remarkably similar! Mine doesnât have the volute and Iâm not educated enough to make any bets but I do see what you mean! That style must just really inspire creativity in their owners.

Hank, Iâll try to put together a new sound sample for you and post it soon. I took down my old ones to remove clutter. Keep an eye out!

I certainly hear you on the price crunch these days. My whole intention was to make this exceptionally affordable, and since I got some generous help with the parts from a Hangout member Iâm obliged to find it a good home at a bargainâwell below whatâs posted. Glad youâre considering it!

Everyone wish FW916-8 here a happy birthday! According to the ledgers it left the factory 80 years ago today, March 28, 1940, as one of Gibson's answers to the demand for affordable instruments caused by the Great Depression. Looking at the market this week, the "poor man's prewar" may live up to its name for another 80 years!

OldWhiteGuy I broke this out yesterday to do some sound samples and remembered I hadn't re-tightened the head after it settled in the first time. It sure sounds a lot better when the head makes a "tat!" rather than a "tunk!" sound! The low end sounds really warm and woody to me but has plenty of punch and volume, while the highs are just diamond clear. I'm far more impressed with the sound now but what it really needs is a better player that actually knows "Blackberry Blossoms"!

These are just recorded on my phone FYI.

It seems wise to be careful about shipping right now. I'd thoroughly wipe it down with a light disinfectant before packing.but I'd recommend doing the same on arrival as well, or letting it sit a while. Shipping time should kill any virus on it but it's my intention to be too safe rather than too sorry!

I'd sure like to find old FW916-8 a home for its birthday. I'm realistic about the shape of this banjo and the state of the market. As always, no fair offer is too low to consider. And with the stimulus checks coming it's not every day that Uncle Sam could darn near hand you a prewar for the asking, and an original 5er at that!

Do I hear $1,500! Still includes shipping and case

'Which head for an Epiphone Recording A' 1 hr