You know when we're browsing (usually on the web) for banjos for sale we often see an ad with a year prefaced by "ca." or just "c." (attached)
Like: "ca. 1918".
Knowing the year of banjo's mfg or close to it is probably important to some people.
I always thought circa 1918 meant we don't know for sure but pretty close there in 1918 but we could be a little off, aw heck, could be 1917 or 1919 give or take.
I was at a meeting that was attended by two of our well known banjo dealers and catching them together chatting I asked what does "circa" mean to them.
They both said 5 years either way.
What?? I thought, holy cow, that's a 10 year spread!!
Any illusions I had about the meaning of "circa" and banjo dating accuracy were promptly dashed.
So, what does "circa" [ca.] mean to you when you see it in a "vintage" banjo advertisement?
I am really interested in your views.
Thanks. 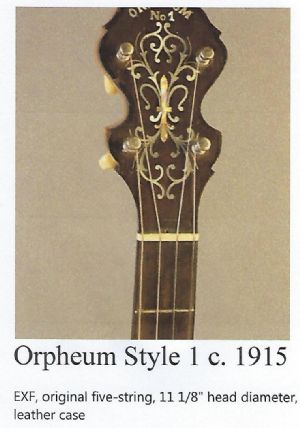 Just thinking in generalities and not vintage instruments specifically, I would probably also think +/- five years for a date of ca. 1915.

To me, circa means "approximately".... just looked it up in the dictionary and that's the definition, followed by "often preceding a date".

I look at it as meaning plus or minus 5 years, so an 11-year window, but not an 11-year difference. “Circa 1900” I would take to be from as early as 1895 or as late as 1905.
Calling a 1930 banjo “circa 1921,” I would find clearly misleading. If you’re really guessing, you should use something like “probably 1930s.” That’s a wide fudge-factor and suggests you don’t really know with any precision. If I was confident within a year or so, I’d say “probably 1929-30” or something like that because I want to say I believe I have the date closer than “circa” would connote.

"Circa" (c. ), is a traditional term used for dating. most of the posters have given very good answers, Depending on whether one is in the vintage, antique business or Archeology. A company w/ very good serialization can date products down to the month, year, or _+ a year. Some systems are looser & may be +_ 5 yrs. & some makers w/out serialization must be expressed in decades . There are several synonyms for "circa", including "probably", "maybe", " almost" etc, but the term 'Circa" covers all the contingencies.

Given that date and that time period, I'd agree.  I mean, they're identifying a specific year, not a decade.  If the intent is "probably built somewhere in the nineteen-teens but we don't know when," then that should be stated.  Why name 1918 rather than 1916 or 1919 if it's supposed to mean a ten-year period?  Are there some specific characteristics that lead to the specification of one year?

Now, if the year is not so specific, but the object can be identified to a general time period, then that's a legitimate use of the word circa for a year that can mean a wider range.  "This desk was made in Philadelphia circa 1900."   "This sword is from a civil war manufacturer, circa 1863."

As mentioned previously, the farther back you go in time, the wider the useful meaning of circa.  "This manuscript is from the late Dark Ages, circa 800."  This knife is from the early Bronze Ages, circa 2000 BC."

Since , "circa" can mean quite a spread in years, Acheologist, Linguists & other scholars who use this term usually mention the earliest posssible date as their dating limit.

Circa is a Latin word. Everyone who has commented has understood the meaning, just defined it a little differently.

What it means to me depends on who said it. If it's a reputable and experienced banjo dealer who handles a lot of old banjos I would expect it to mean within a few years either way, and I would expect there to probably be some kind of explanation of why they think it is from then included in the description. If it's one of those confused people with the "Very Rare Remo Banjo Circa 1900" then I think they have no idea and just made something up that they thought sounded good, or they got a wild guess from someone else and quoted it. I'm not at all knowledgeable about old banjos, or indeed banjos in general, so it's very likely that I wouldn't know how approximate someone's estimate might be, but some are so far off that even I can spot them.
Zach

Thanks all for your replies.
I was surprised about how many of you are so forgiving.
5 years +/-. Golly!!
I thought "ca." meant sometime in the year circa-ed or so.
In those "circa" ads my eye goes to the date circa-ed and my brain seems to tune out the "ca." So in the example attached I'd be thinking it was made approximately sometime in 1915.
Hope this thread will be helpful to someone in the future who is considering a banjo ad with a "circa" in it. The meaning of "circa" can be quite broad.
Meanwhile, thanks again for sharing your views.
Very helpful.

Circa? it's originally latin and has the root meaning of 'around' - we get circus from the same root word along with circumference. I'd expect a date 'circa 1920' to be + or - 1 year and no more BUT we all know linguistic flexibility is proportional to price in instruments. I really love similar 'flexible' terms like '95% new' (which bit is old??) or 'probably an easy fix' - (10, 20, 30 or what % probable??).