Buying a tenor banjo in Poland.

I have decided to buy a tenor banjo after getting inspired by Steve Caddick, Eddy Davis, and Lino Patruno. I have absolutely zero experience with any kind of instruments.

At first, I wanted to buy a Harley Benton banjo since it's the cheapest, but after reading threads on here and Reddit I've decided against it, because depending on how much I enjoy playing the banjo I will most likely want to upgrade in no time, and the thing will be impossible to resell.

As of right now, I have three main candidates:

My main concern with all 3 of these is that none of them have a resonator, which might come in handy after a while of playing, and there's a chance I might join my school's orchestra or just jam with my classmates (a bassist and a saxophone player).

I saw that there's a resonator version of the 5-string Dirty 30s banjo and was wondering if there's also a tenor version with a resonator or if it's possible to add a resonator to the base model.

I am also considering just getting a Goodtime II Tenor instead, but maybe there's something better for that price (it costs 2900z? = 666 euro).

Before you ask, there are next to none used banjos being sold here, so that's not an option.

And if by any chance someone lives in Silesia and would be willing to let me try their banjo, please write!!

Gold Tone makes a resonator version of the AC-1 five string model. You might ask if the same resonator could be purchased later and installed on an AC-4 if you decide you want to go that way.

Poland has yet to discover the banjo.

Gold Tone sells an AC resonator kit which should work just as well for a tenor banjo as for a five string. Look on their web site under parts.

I just watched Gold Tone's video about installing their Reso-Kit resonator on an AC-1. Someone asked about fitting it to an AC-4, and they came back to say it will fit. Not a bad upgrade for $79.

OP, are you still there? Any comments?

My main concern with all 3 of these is that none of them have a resonator, which might come in handy after a while of playing,

You mentioned Eddy Davis. He perfers an openback tenor…

Parker135 Yeah! Sorry it took me so long to respond, but I did not have a lot of free time.

The AC4 looked interesting, but I'm not a fan of the sound (at least judging from videos). I might just go to the Thomann brick-and-mortar shop and try out different banjos to see how they actually sound.
Though I am leaning towards the Deering. And now that I know Eddy plays an open-back (thanks, Emiel!) I might as well go with the normal Goodtime.

Good morning! If you have an opportunity to play some different tenors by all means do it. I have a 17 fret Goodtime which I really like. I was able to buy a used resonator for it which is the same one they use on the five string. But it's a nice banjo as an open back as well. Thanks for checking in and good luck!

After playing many different banjos throughout his (earlier) career, Eddy now definitely seems to favor his 12", 17-fret Ome openback. It does have a, probably self-made, "reflector" at the back, that covers about part of the rim…: 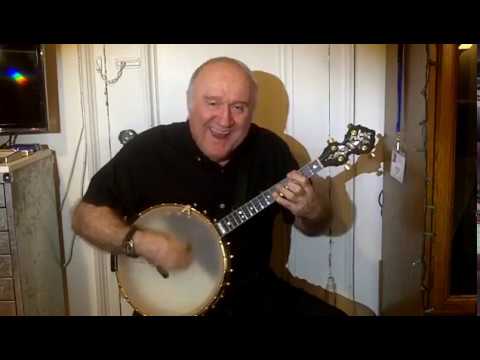 I have the Recording King Dirty 30's banjo you mentioned. I did a proper setup on it, what I think is as good as you can get, and while it plays fairly OK and sounds like a banjo, I will say it's not an inspiring instrument. I also have a Dirty 30's parlor guitar that I got after reading great reviews of it, hoping that maybe the Dirty 30's guitars might be better sounding and playing than the banjos... but no, same result. I understand these are low budget instruments so I'm not upset in any way, but I guess I'm just a bit underwhelmed. They look cool though. Nice wall hangers.

The GoodTime banjos are quite a step up in my opinion.

I'm guessing you are looking at playing in standard CDGA tuning? This tuning makes the first string quite piercing. As a beginner, I'd not be worried about an open back. You are going to be spending a lot of time making some not-so-great-sounding noise on your banjo before you get the hang of it (no offence intended), and having a banjo that's not as absolute loud as possible may not be such a bad idea at first (or ever). It's still a banjo strummed with a pick, so it's going to be loud either way though.

Good luck, I hope you enjoy the journey! It's a lot of fun if you stick with it!

'Any interest to help a BHO member?' 4 hrs