Hi
I’m pretty sure I have a PB-1 from the 1920’s. I do not know anything about old banjos but it appears to be all original except the tuners, the bridge and the head. I also do not know how to date them. I am looking for help with what I have, how original it is and also what kind of case it has(harptone?). The good news is that I can take photos!

also, if it’s not against forum rules, how much is this banjo (realistically) worth?
Thanks!! 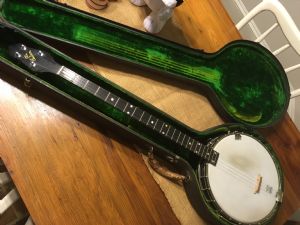 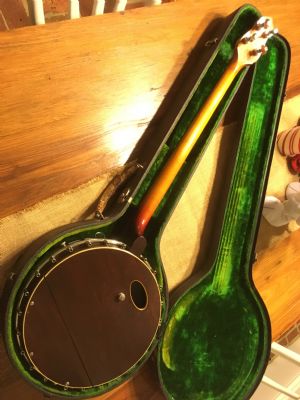 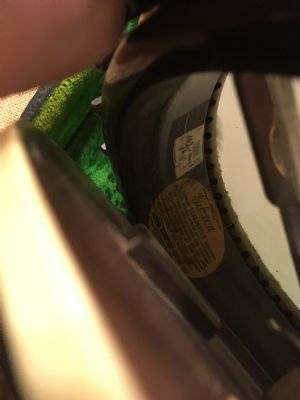 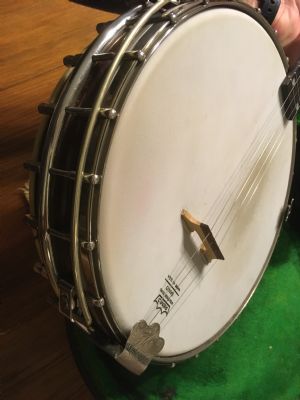 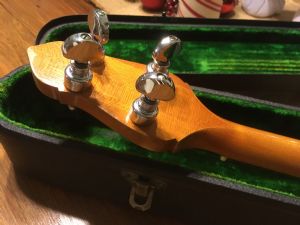 This is a Gibson "trap door" PB-3 from 1923 or '24. The banjo appears to be in excellent condition, and the case appears to be original. It is what is called "a very nice example."

The tuners, head, and probably the bridge have indeed been changed. Everything else that I can see looks original.

Trap door Gibsons are not particularly valuable. Most that I see are tenors rather than plectrums, and the tenors are usually listed in the $600 to $1000 range, depending on condition and who's selling it. I don't know whether or not the market value for a plectrum would be any different. These days, there is probably more interest in tenors than in plectrums.


The trap door banjos have an interesting, funky sound when played with a flat pick.  They can be fun for playing Irish and old-time tunes.  I have a tenor which I keep in "Irish" tuning.

You know, people like Bob are what the hangout is all about.Good folks willing
to share their knowledge and skills Thank you!

Thanks so much Bob! I believe I read somewhere that a change in the hex head shape happened at some point in 1925/26. Is that how youâre dating it? Is that the FON on the small piece of white paper inside near the label? How do you know itâs a PB-3 vs PB-1? Is there a place where yâall keep copies of old catalogs here for reference?

I really appreciate your help!!

That is one of the most excellent PB-3 banjos I have ever seen. I’m guessing it wasn’t played hardly at all. It looks as if you went in a time machine and bought it straight from Gibson. It’s extremely hard to find a prewar Gibson in such fine shape as yours.

If you do get the conversion bug (not that you will), and have the money and patience, have Frank Neat build a matching neck. There’s no better neck builder in my book.

If you want the most value, keep it completely original.

thanks! i am a guitar and baritone uke player so the plectrum in chicago tuning is a nice change of pace to play. i basically translate all the guitar tunes i like to noodle across to the banjo. any suggestions for better/more historically accurate looking tuners?

Really nice Gibson Trap Door Plectrum. I guess some phantom opened up the vintage plectrum banjo dimension as it seems a few nice plectrums appeared here in the past 24 hours.

Plectrums are a little rarer than tenors, but more common than five strings. (There is part of a nightmare high school algebra equation in that)

As mentioned, yours is a trap door banjo. The theory was that the tone could be altered by opening and closing the door in the back. I personally cannot tell the difference, but I talked to others who tell me different, so it must be me.

What you have there that is really rare is the case. Very nice and pretty valuable. Reason being is that case can also be used for some five string banjos and some collectors will pay a premium for a period correct case that fits a particular instrument. That case alone could bring between 200-300, so add that to the value of the instrument.

Those tuners look a little off place. See if you can dig up a set that matches the instrument better.

Definitely a PB3. The PB1 did not have a tone hoop, which appears in the photos.

The original tuners would have been some kind of friction tuner. Gibson used different types, some plain, some spring loaded. and many of the tenor versions had guitar type tuners. I don't think you should worry about those generally inferior originals if you plan on doing much playing. You might, however, consider replacing the tuner buttons with celluloid ones.

Some of these trapdoor banjos also came with a pick guard.

Yours is in excellent condition. You even have the tailpiece cover, which most of the time has gone awol. I have one of these PB3's and find it to be a very nice sounding and responsive banjo, although maybe not as loud as some other plectrum banjos by other makers.

I think part of the reason for these not being as valuable as the later Gibsons is that they have a 10 1/2 inch rim and do not make easy or very good bluegrass conversions, which are nearly always 11 inch rim Gibsons with a different tone ring.

Scott, I dated it and identified the model by the peghead shape, the peghead logo, and the trap door.

Trap doors first appear circa 1922, and are discontinued with the introduction of the Mastertone in 1925.
The "mocassin" shape pegheads with "points" interrupting the shape were used on styles 3, 4, and 5.
Style 3 pegheads from this period had "The Gibson" inlaid in pearl, and no binding. Styles 4 and 5 were fancier.
According to Gruhn's Guide, style 3 was first catalogued in 1923.

There are other things that separate the various models, but I won't list them here. Gruhn's Guide and Spann's guide are very useful for sorting out the old Gibson instruments.

All the Gibson models were re-designed in 1925.

I won't comment on the number on the paper label, because I cannot see it clearly.  Usually, factory order numbers are impressed into the inside of the rim.

Trap doors can be a little tricky because some of the banjos varied a little for standard specs. However, this one is a text book example of a 3.

The paper label appears to to me to be a notation of the head diameter and was most likely a previous owner's note to himself for the next time he needed a replacement. It's clearly not a factory order number, which was stamped into the wood.

Bob has some very good information about these early Gibsons. He's quite correct about slight variations in specs.

I can probably manage a photo of the factory spring loaded friction tuners on my PB3, if you do decide to attempt to find originals. I doubt they'd work on your banjo, though, because most newer replacements like those on your banjo require enlargement of the original tuner holes, so the old ones will likely no longer fit properly. Plugging those holes and re-drilling for the original small shaft friction models would be a rather undesirable visible repair

The only other advice I can offer is to be very careful about the number of times you open and close the trapdoor. The hinges are basically springs, and too much use will cause them to break from metal fatigue. Use the latch so that the door doesn't wobble around. Either keep it closed when playing, or keep it latched open; the hinges don't survive long when attempting wah-wah effects with the door.

thanks to you both for the information. i know my vintage guitars(Gibson and Martin) but I am a total novice in the banjo world. it really sounds great and is very playable as is. i really appreciate all the help from everyone. Merry Christmas!!

Yes, and I wouldn't bother with original style tuners either for the reasons that George mentioned. Plus, it's more trouble than it's worth, and the ones that are on the now probably work fine. Nicer buttons might be worth it, though, if you can find some that will fit.

This topic is almost as good as poring over the discovery of a prewar Gibson five string!

Methinks the Ghost of Vintage Gibson Plectrums, was responsible for opening the aforementioned plectrum dimension.

After really spending more time with this banjo last night it could really benefit from being refretted. It frets out a bit on the high e string and the notes are a bit weak in areas bc of this. Set up is great but I bought it from a GC near the top of the value range that I expected (and yâall confirmed). I am going to see if they are willing to give me credit back to have the work done but Iâm not expecting that and may end up returning it bc I canât sink that much more dough into it. Stay tuned(pun intended)...

Maybe this will sound harsh, but I’m dead certain you will sorely regret returning it. Don’t fall for that. Don’t entertain the thought!

You’ve acquired a valuable piece of Gibson history that some of us have only dreamed about getting, notwithstanding the great condition it’s in. I think I remember seeing that PB-3 for sale on the GC website, as a TB banjo!

Keep the banjo and make some music with it!

I’m sure there’s someone on the Hangout who’d be willing to look at, and repair the frets at a lower cost than what you’re worried about paying.

I totally agree! Iâd be happier if it were saved from GC and enjoyed as well but i canât sink $1300-1400 into a $600-1000 banjo. You have the right listing in mind. It was listed as a TB-4. I figured with the case it would be worth what I paid. Iâve texted my luthier about cost of a refret. Weâll see.