Hello All
I Just recently purchased a Fender Concert Tone Deluxe. It has all the "bling," carving, extra engraving and so forth. I have owned this particular model since my high school days but a non carved one. I kind of knew what I was getting myself into so I am reaching out to fellow members to hopefully shed some light on these banjos. Any help would be greatly appreciated. I'll just list my thoughts/opinions in no particular order:

1. The dealer I purchased this banjo from claims this banjo was made in 1977, I don't believe that is accurate. Years ago I spoke with the largest Fender dealer in Fullerton Ca & he said the banjos were first listed in the price list catalog in 1966 and went out of the catalog in 1974. Thoughts?

2. My concert tone from high school has a serial number 039** and this newly acquired banjo is 038** this would leave me to believe this would be older than my 1st concert tone which was delivered to me in June 1971. I have been told Fender's numbering system was not sequential but could they be that far off?

4. The carvings are painted, I have seen a couple of these banjos not painted just stained the same color as the rest of the banjo. Did the painted ones come before the non painted ones? I saw an original Salstrom banjo with carvings & they were painted. FYI Saltrom was the company Fender bought the banjo line from.

As far as I can tell, this banjo seems all original so any help would be greatly appreciated. Thanks in advance

Please contact me thru Hangout mesage. I can give you the whole run down on the Concertones. Just for your info the dealer you talked to is 100 percent WRONG. I worked at Fender at that time and while didnt make the banjos, being the only banjo maker to ever work at Fender I was consulted regularly, and actually held the last two carved Concertones ever made... after 1977

Thank you so much

I will try to do that at a later date

I was looking over the catalog & I believe the banjo listed is very similar to the one I just purchased. When my dad purchased my non carved model, we had the 1971 catalog. That particular year the carvings were non painted & only stained in that particular catalog. I've seen 2 like these, one belonged to Curtis McPeake. He used that banjo when he was with Danny Davis.

Scott Zimmerman can give you ALL the specifics on your Deluxe. I own one as well and Scott helped me with dating mine, as the serial numbers mean nothing- they were not sequential. 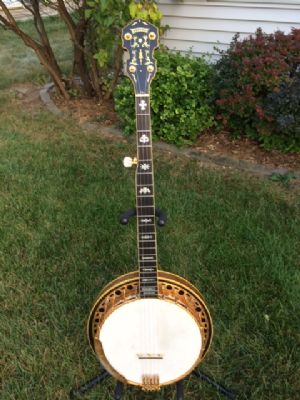 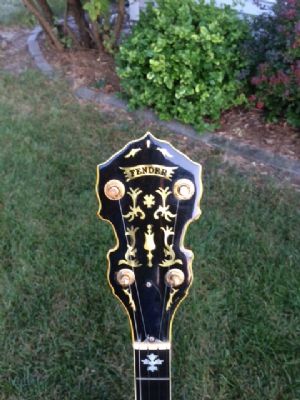 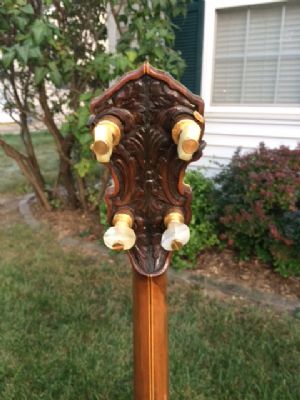 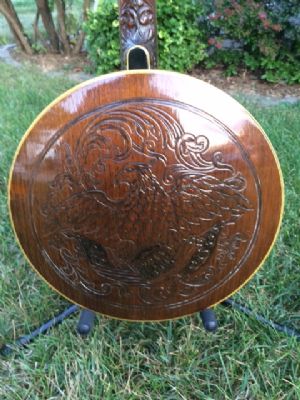 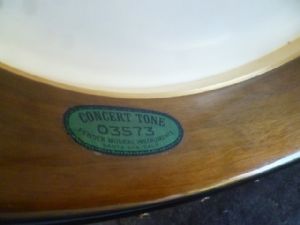 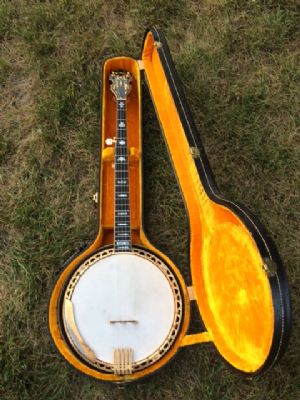 Salstrom, then Fender, made some great banjos.
I once spent a few months trying to find a Salstrom Concert Tone Deluxe. That model was available with a tubaphone type ring. After a long search, I learned of one in Nashville. Seems like many of the great banjo players liked it so much, it kinda got loaned around a lot. So much so, I think it finally disintegrated or something.
At that time, I don't think anyone knew of the banjos exact location, or who the actual owner was. Kind of like trying to locate a Yeti or something.

Congratulations on your acquisition. These are not easy to come by.

Scott Zimmerman can give you ALL the specifics on your Deluxe. I own one as well and Scott helped me with dating mine, as the serial numbers mean nothing- they were not sequential.

Thanks for the photos! I saw one of these back in the late 1970s at a music store in Ellsworth Maine (new). It was a PLECTRUM, not a 5 string. It fascinated me.

Hi, I have a Concertone Deluxe Plectrum, with painted Eagle etc.
It was custom ordered and most unusually has the owners name inlaid
In the Peghead, rather than Fender. I later came across a spare Tenor Deluxe neck.
It is in original mint condition as well.
Scott, do you know anything else about this Banjo ?
keith

Here is what I have 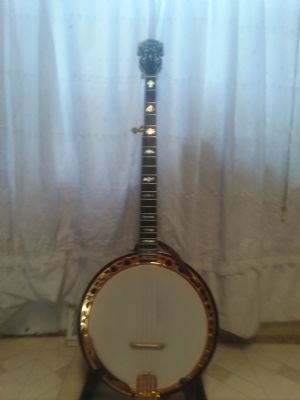 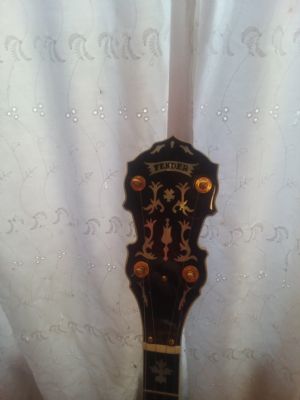 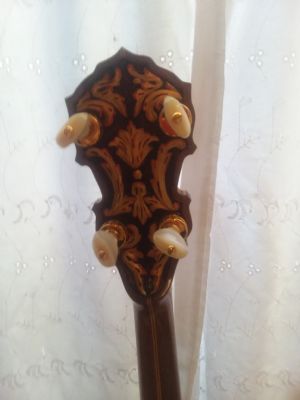 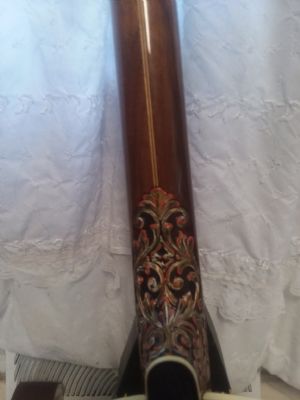 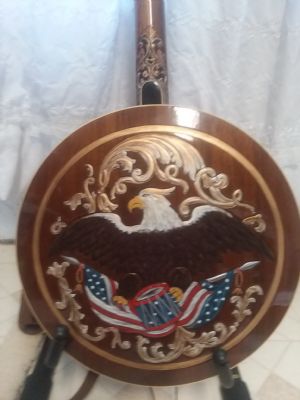 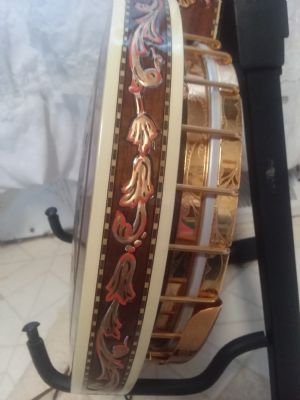 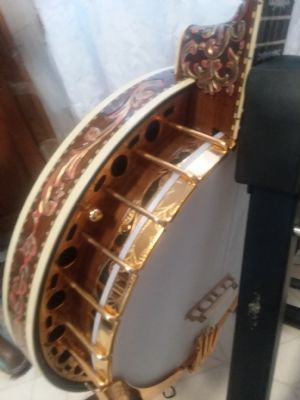 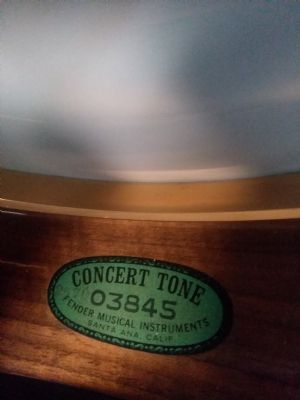 Modern Fender Concertones don’t even begin to measure up against the originals! You got a super banjo there, Ron!

Modern Fender Concertones don’t even begin to measure up against the originals! You got a super banjo there, Ron!

I agree, IMHO this one is exceptional in workmanship and tone, Better than the one dad got me in 1971

Thatâs a piece of art! I personally have never seen a painted Deluxe in person. I would love to see yours sometime, as I travel to Iowa on occasion.

Where were they made? Santa Ana, CA?

jlsorbit - the California Fenders were built in Fullerton, CA. The business office was in Santa Anna

@rbfour5 - Thanks! They must have been pretty expensive banjos with all the artwork and embellishment.

That looks to be in beautiful shape.
I'd "protect the gold plating" against wear-n-tear...

I posted this in the Fender banjo Group about almost 2 years ago. This is what George Gruhn had to say about the Fender Concertone Deluxe Custom banjos:

In the latest issue of Vintage Guitar Magazine (March 2018) someone name Creighton Miller submitted the following question to "George Gruhn's Q&A": "I have a Fender Concert Tone Custom banjo from the late '60s and am curious how many were made. Also were they all carved (on the back, headstock, heel and rim of the body) and painted like mine, or was that done only on certain orders?"

There are two color pictures of his banjo, one of the resonator and the other of the heel; they show the painting and carving.

Gruhn replied, " Circa 1967, Fender bought the Salstrom banjo company in Oregon, Illinois. Having no interest in research and development, Fender used Salstrom parts to make its Artist and Concert Tone banjos in Santa Ana, California until the end of production in 1979. There were three variations of the Concert Tone Custom, the earliest with unpainted carvings, the second (beginning in '68) with carvings highlighted with gold leaf, and the final (beginning in '77) carved and painted. The carving and painting were done by a subcontractor whose name was never revealed. According to Fender records, they produced a total of 18 Concert Tone Custom model banjos in all three variations."

I wonder if it's true that they only produced 18 of these in all the possible variations (tenor, plectrum and 5-string).

neuronz - Yes, the number of these Concert Tone Deluxe totaled (18) of all configurations, tenor, plectrum and 5- string. Scott Zimmerman here on the Hangiut personally handled the last (2) that were built. Iâm proud to own one of only (18).....