There is also a "used" one in the classifieds. I use the term "used" loosely because it is probably no more played than shop worn banjos that go as new. From what I have heard they sound very good. Not "very good for the price range," but very good for any price range. I'm not going to hype it and say it put anything Jim Mills has at his house to shame, but nobody expects that. The issue with production banjos is whether you're getting a well constructed piece that is fitted and set up properly. Not an easy thing to accomplish. But it appears that they are doing it. I think it's a bonus that the boys in the cabin are working on these themselves. I would be confident buying from them as I have had several positive dealings with Ben in the past.

I'm touring hte Gold Tone shop this summer as a pre-conference field trip. To my understanding they get everything as parts and do setup and assembly in house before anything goes to customers. I'm with you that it likely won't compete with most customs or those re-worked pre-wars and the like because ultimately it is a sum of it's parts, but they way those parts go together should be pretty solid.

I just received my Twanger about two weeks ago. I have been playing the banjo for only about 5 months and started with the $150 Amazon model to dip my toe in the water. I cannot believe the difference in the Twanger. My wife says it fills the house with sound and it sounds like I'm playing two banjos (I think that is a compliment..but in hindsight maybe I should clarify). To me, it is like a completely different instrument.

I absolutely love it. I had an impromptu jam session last night...as much "jamming" as a 5 month old banjo player can have. We Cripple Creeked and You are my sunshined until our fingers hurt. My friend is a long time guitar player and said this is the best sounding banjo he has ever heard....I doubt due to my awesome playing.

I think the comparison between this and any of the Recording Kings is very subjective. For me personally, i was looking to buy a "cheaper" 2nd banjo to play when i didn't want to take my Granada out. I originally had my sights set on the Gold Star JD Crowe model, but i was never able to find one locally to play and the prices were going up so i started looking at the RK line. I played two that The Banjo Store had in stock, a RK75 and 76 and for me personally i was not impressed, the were very well built and looked great but i didn't "love" the sound. A few weeks later i played a RK36 back to back with the 75 and felt the 36 sounded much better and was a good bit cheaper as well. I ended up buying the 36 and still own it and while it doesn't get much playing time i am always blown away at how it sounds given the price point.

I did get in on the first batch of Twangers and i have to say its a completely different animal than the RK. Sound wise, i think the Twanger sounds better, it def sounds like a more expensive banjo, deeper lows and more volume and sounds better up the neck. I do think the fit and finish of the RK is sightly better than the Goldtone but not enough that it should sway you from considering one. For the money both brands offer a phenomenal product that allows you to get pretty close the the sound of "traditional" brands at a fraction of the cost. My personal opinion is that if you are in the market for either and you can get your hands on one to try out, then by all means do it. As we all know, the banjo is a very sensitive instrument, the setup greatly affects the sound. Banjo Ben and his team did a great job and going over them and giving them a good setup so that it arrived sounding great out of the box.

In the year and half since buying my RK I have played many additional RK's and some were good and some not so great. If you are making the purchase sight unseen its always hard as you don't know what you will get but both of these brands have really stepped their game up and you will be hard pressed to find more value for the money and i think you will be very pleased with what you get. I have played many $3k + banjos from all the major brands that were not as good as either of these.

All that being said, i'll probably list both the RK and Twanger for sale soon as I have no need for 4 Banjos and buying an old Gibson is something i would eventually like to do. For me the Twanger wins over the RK75/76 line but if you are on the fence with either brand, i don't think you will be disappointed in either one you pick. If i get a chance I will try and do some comparison videos of the 2.

Finally got around to making a quick video to compare the RK36 & OB-3 Twanger next to a Yates Skillet Head and a Gibson Granada. This was done in a hurry using a iPhone so the sound quality isn't the greatest. Maybe will all this time at home ill get a proper mic hooked up and do some better videos at some point.

As you can hear, they really all sound pretty close in this clip. The last 2 cost more than double and you would be hard pressed to say the sound is worth it price difference. Now what you cant tell is of all the banjos, the RK has the least amount of power and you have to dig in and pick it a little harder If your playing in a jam or somewhere loud.

The Twanger has more power/volume, heaver strings and is a little harder to play. Ive messed around with setup and if i set it up to match the others it doesn't sound as good so I've settled on heavier strings and a slightly higher action to get it to sound where I'm happy with it.

The Yates and Gibson are a lot louder than the other two and you would expect that, they also are easier to play in my opinion based on the set ups on them.

As I have stated on here before, if you are in the market and you want to spend under $2000 these are hard to beat. Ive played a lot of banjos in that area including the Goldstar GF100JD Crowe Model and The RK75/76 models and i do not feel they are better than either of these two. And i was quite disappointed in the ones I played. The OB3 gives you that RB3 sound, look and feel for a very nice price. The RK36 can be found regularly for under $1000 and is a the bargain of group, it can hang with banjos well out of its price league. In my opinion i would say the RK fit and finish is slightly better than the Twanger. Personal taste is ultimately what will drive you to one of them and if you can get out and play one (once we are allowed to again) i definitely recommend doing that and remember most stores do not have good set ups. I tried over 20 different bridges on these banjos and each one gave a very different sound, so a good setup will make all the difference. I cannot say enough good things about TheBanjoStore if you are in the market and Adam will definitely set it up right and have it sounding great when it arrives in your hands. Same goes for Banjoben1 and all the guys at the General Store!

If you have any questions feel free to message me and I'll do my best to answer them or if you want to see anything in particular in video just let me know! 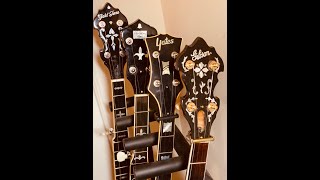 VIDEO: Side by Side Banjo Comparison
(click to view)

Good comparison and appreciate the kind words! I'll say that my Twanger and some others I have played like the PF135s and similar the best, though yours may be different (and different ears/hands). Good pickin' in the video!

Thx for the comparison. Nice picking too. They all sound good. I believe I prefer the tone of theTwanger over the RK. Its definitely right there with the Yates.

They all sound great on the first three frets. It would be nice to hear what they sound like in the middle, up the neck and way up the neck. Tone can change a lot as you go up the neck. Some banjos can't handle the really high notes on each string and end up sounding shrill or dead. If you can do a few nice 2-5 slides on the 4th string, that would be nice too.

I agreed about down the neck and with capo on these each are very different. I’ll definitely try and get around to putting some different comparisons with different keys and down the next stuff.

'The Dead South - Down That Road banjo tutorial' 6 hrs