I Ordered The Osborne Chief (Part 8)

Sonny, where did Bobby acquire that old Gibson Fern mandolin? Many times it sounds better than most Loars comparatively. And I can always tell when it's Bobby playing on the radio.
Josh

Bobby bought that mandolin in 1953, while we were in Detroit, from Charlie Bailey  who bought it from a bought it from a music store in kNOXVILLE. Charlie was one of the Bailey Brothers, who along with his brother Dan were quite popular in the 40's and I believe for a short time were members of The Grand Ole Opry.

That Mandolin is truly one of, if not he best tone F5 Mandolins I was ever privileged to hear. Bobby was such a great vocalist that his Mandolin playing was often overlooked. If it is ever a question in your mind, he has an album titled "Bobby and his Mandolin." It's awfully good.

PLEASE KEEP THIS IN MIND.   JIMMY SUE WANTS HER BANJO BACK!

I wonder about the mentality of someone who would steal something as personal as a banjo.

PLEASE KEEP THIS IN MIND.   JIMMY SUE WANTS HER BANJO BACK!

I wonder about the mentality of someone who would steal something as personal as a banjo.

you made them too purty too resist ,,,,, still takes a low life to do such a thing

Hi Sonny, I saw in Your posts mentioning Red Spurlock, I saw Him on TV 5 years back playing a custom 5 special one of a kind Gibson. Said He'd been offered 60.ooo for it. I have a record of Him pickin Beaumont Rag, best break I ever heard on that tune. There used to be a picker Jim Spurlock from Kentucky I think? Thought You might know? THANKS. I'll be 83 next month, and you, and Dale Sledd have inspired Me. THANKS MUCH Son.
Lee Kelso

Hey Lee, I don't think that would be the same Red that I knew.

I'm always glad to hear that we were an inspiration, or influence on anyone. We were a bunch of guys doing what we were put here to do, and doing it as best we could.

I just found a tour booklet from one of your 1960s Osborne Brothers' tours. (I'm posting 3 of the photos in the booklet).

From the behind-the-scenes photos, it looks like you guys had a lot of fun on your tours, and played some large venues.

Do you know what year this tour was?

How did Ronnie Reno start working with you and Bobby? 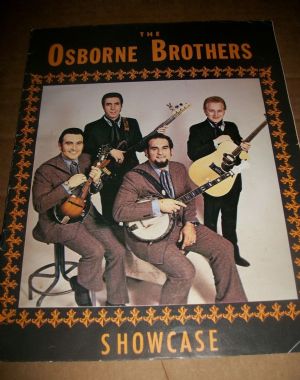 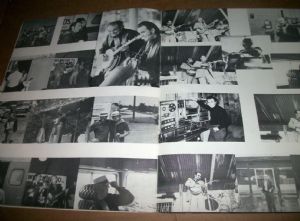 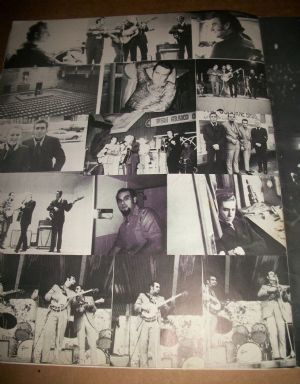 The year for that booklet was about 1970. Ronnie played bass until Dale Sledd took a leave of absence at which time Ronnie played the Guitar and sang with Bobby and I. Excellent singer, quick to get parts and knew how to change parts. Ronnie was very good. One of the best we had to sing with.

I'm not sure why Ronnie wanted to work with us although I would guess he wanted to be with younger, different type players, and he wanted to be in Nashville, and have the experience of the Grand Ole Opry. This is my opinion.

His career moved along well after the move, culminating with the harmony vocal job with Merle Haggard, which lasted for a number of years. Ronnie is a good friend to this day and is one of our lunch gang.

Sonny, I guess you know that Mac Wiseman passed away this morning.
ken

"One of our lunch gang" That alone would keep a new thread going for quite a while. I imagine the lunch gang could tell a lot of stories about life as a Bluegrass musician.

Btw, if I haven't mentioned it yet, thanks for all the years of some of the best bluegrass music ever.

Mac (Malcom) was a very close friend for more years than I care to admit. One of our very best recordings was with Mac Wiseman. "Essential Bluegrass" on CMH record label.  Mac was 93.

We have a good time, and yes there are great stories told and three or four hours of the best time one could imagine. I probable left out a few but I am 81 you know!!!!

Loved Mac’s singing. Saw him up at Bluegrass Canada fstvl in the mid ‘70’s. He also did an album of Gordon Lightfoot songs that I admired. Sorry for the loss of your friend, Sonny.  RIP Mac.

Mac was an American treasure to say the least. "The Voice with a Heart" was one of a kind.

I have the "Essential Bluegrass" LP... Sonny your break on "Four Walls Around Me" is classic. I love the big reverb sound on that record.

Let us not forget this great album of Mac with the Brothers. One of my favorite bluegrass albums ever. The people that sang and played on this album will never be equaled.

You mean all these people gather for lunch in a public place and it's not in the news? :)

That would be quite a funny hidden camera trick to play on innocent aspiring bluegrass players to let them run into this "lunch gang"...

These people are not all present at the same time, all the time. Usually about 10-15 show up. I reckon I should post a photo of a typical gathering.

If a news person made an appearance I think most of us would ask  them to either agree to and respect our privacy or be so kind as to leave.

Raymond Huffmaster made it to one.

We have a good time.

That sounds like a hot rod version of the opry reunion shows. Iâd pay money just to sit where I could hear the stories. I bet thereâs some doozies ??.

Inadvertently, but rather predictably, I left at least one more guy out...JIM HURST. Without doubt there are more.

Do you and Bobby still play for fun when you both get together Sonny?

We have a good time, and yes there are great stories told and three or four hours of the best time one could imagine. I probable left out a few but I am 81 you know!!!!

You ought to write a book.

That's something that could be read and enjoyed for generations.

I see Geoff Hohwald has one of the rare Stelling Sonflower's, #17 of 23. I thought there were more of those made. I seem to remember you saying it was a good banjo but just didn't work out for you. I have a Stelling Master Flower and I love it, even though Mickey Flatt's Mahogany Chief #1 almost won me over. :)

The Stelling I had was an excellent banjo and some of he best playing I did was the medley from Stockholm, Sweden. The problem I had was, I couldn't keep it in tune. Never figured out what the problem was except I was told the finger board was made of a material that contained plastic. As I recall it was called Ebonite? True? Not true? That might be wrong. Geoff tried everything known to man to fix it but finally he just said I had played the Granada too long

and paid me for my endorsement.

Wayne Rice of KSON radio in San Diego, California has the banjo now and he has not had any problem with it...Beautiful workmanship, finish, tone, volume, and all.

And the fact that Geoff Stelling is one of a small group of people I have dealt with who is Honest. Up right and honest. The proof of that statement is the number of years he's been building high quality banjos. Maybe 40 years? Longer? So I tend to believe my problem was just that...ME. But that Son Flower was a top of the line professional banjo...Closest thing to it would be the Osborne Chief...I didn't say better than...I said close.

THEM THERE OSBORNE HOFFMEYER FINGER PICKS HAINT BAD EITHER. AS GOOD OR PERHAPS BETTER THAN THE OLD NATIONAL!

You gotta have good equipment!

Easier to pick with good equipment!

Davidcava....Bobby and I don't see one another very often...he's still working and teaching. And add to that the fact that I don't play at all. Rotator surgery in 2003 took care of that. So, in answer to your question it would be No. He and BOJ come to lunch and I enjoy their company a great deal. We saw more of one another for over 50 years than we did with our families, so neither one of us knows anything that the other doesn't. Still best friends.

Unlike most brother, or family acts...Bobby and I never argued or fought...sure we would disagree but it was always settled peacefully. Thank you Lord.

I consider myself one of the most fortunate people...For 99% of that 50+ years I was privileged to stand beside and listen to him bring it every night. Amazing voice. I consider him to be the best. The REAL DEAL.

For those who don't know...BOJ (Bobby Osborne Junior) is Bobby's youngest son. Nice Man. Good acoustic Bass player.  Hello! I gave him that name..BOJ...and it stuck.

'Down in the Willow Garden (TOTW)' 6 hrs