The banjo reviews database is here to help educate people before they purchase an instrument. Of course, this is not meant to be a substitute for playing the instrument yourself!

Best it could have been. I requested Labella nylon strings and they were installed.

Will be discussed in the review.

Just via Email and the phone call to place the order.

I have been watching these banjos from when they were first announced.  Few have come up for resale as of this writing.  After receiving the banjo and playing if for a couple of days I would like to share my thoughts.  I will add that I paid sticker for this with my own cash.  I am not a dealer or professional endorsee.

I chose this as opposed to other modern (or US) makes because it conforms to the original pattern.  I have long wanted a "new" banjo of the Whyte Laydie pattern.  Many modern builders have altered the banjo design to place the bridge closer to (or exactly in) the center of the head.  They also have a terrible habit of removing a portion of the fingerboard at the base of the neck thus reducing the playable range of the banjo.

As a response to steel strings, modern banjos are just plain over-built in my opinion (hey, this is a review so it is all my opinion).  I presume the goal is to create a duller tone to balance out the shrillness produced by steel strings.  This banjo uses the original proportions and as such embraces a clear sharp tone with plenty of carrying power.

This banjo was also quite affordable as I am a working slog.

Upon receiving, I first noticed that the case was different than the one that was advertised.  This banjo was stated to come with a "reproduction single bump case" where there is a swell where the fifth peg is.  The case I got was a Saga Supreme bump case.  Luckily, I like these cases and think that this is actually an upgrade over the "reproduction case."  I am quite pleased with the case.

After allowing acclimatization, I unpacked the banjo (it was excellently packed from Bernunzio).  I removed it to check for shipping damage.  Finding only that the bracket that held the dowel rod had shifted, I repositioned it and began to tune it up.

The banjo is well-finished and fitted.  The parts are not the standard import grade.  It was mentioned that the hooks are round and that they should be flat ("cobra") hooks, but the #2s came with round hooks so these are correct for this model.  The wood in the neck is clear straight grain maple (mine has a little curl in one spot) and the rim has some tiger striping inside.  The plating of the parts looks good-- in fact the whole darn banjo looks good.  Engraving in the fingerboard is crisp.  The hawk on the peghead is a nice gold color with lots of shimmer.  The engraving in the hawk is heavy, but it makes it stand out.  (What people don't realize is that the engraving on the fingerboard is for the player, and the engraving on the peghead is for the audience and needs to be seen.)

I'll admit that I was fully prepaid to change the tailpiece.  I had ordered one of the beautiful cammed no-knots from Elderly.  I want it fully understood that the no-knot on this banjo is not the same as the other Asian imports.  It is a well-made and polished replica conforming to the original specs. The posts are spherical and smooth.  The string notches are polished with no sharp edges. The bolt is correct.  This is the first re-pop no-knot (that functions like a no-knot) that I am happy to use!

I'll let the photos tell the rest of the story on quality.

I had stipulated for setup only that I wanted Labella #17 nylon strings.  These were installed. I did not use the modern bridge it came with but instead made a Cole pattern for it.  I have made some more period correct bridges that I will be trying out for fun.  Other than the bridge, this is the first banjo that I have ever owned that I just tuned up and played. The tone and volume is fantastic!  Clear and sharp with plenty of bass.  Fourth string slides are strong, with sustain enough to not be lost.  This is a powerful banjo!  Plenty of volume to allow for shading.

Action is good.  The fingerboard is true throughout all three octaves, as is the tone.

Now for what was wrong with the banjo.

The fingerboard binding on the top side near the nut has a patch.  A little sloppily done, it looks like the factory ran short on the binding and patched a piece in.  I could see how this would be a major complaint for someone.  I play antique banjos and they all have problems like this.  Were I to be in a music store and see this I probably would leave it on the hook.  It does not affect playing so it does not really matter to me.

The imitation tortoise binding has a spot that has come loose. It may have never been glued down, I cannot tell.  I'm surprised that they did not see and address this before they boxed it up to send to me.  I'll put a tiny drop of cyanoacrylate glue in there to hold it (likely what they would do).  Hopefully this is not a sign that the binding was not well glued.  Time will tell.

There was some sort of sticky residue on the top of the neck.  I say was because this seems to have vanished after playing it for some time.  The neck was wrapped with bubble wrap for shipping and it could have been from that.

That is it!  Really, that is all that I could find wrong with this banjo. As of two days in, it is a keeper.

What I'll change.  This has nothing to do with the banjo as received; rather it is just what us banjoists do.  I will likely change the tuner buttons to some "cream" buttons I bought from Elderly.  These will match what would have originally been on there.  I am going to install a wire armrest from Bob Smakula.  I'll continue to experiment with period-appropriate bridge designs.  I am going to leave the plastic head on (this will be the only banjo I own other than a GT travel banjo that has a plastic head), but remove the "Eastman" logo when the honeymoon period wears off.

I am giving it a overall rating of 9 because of the two manufacturing issues.  Besides those, it is a 10. 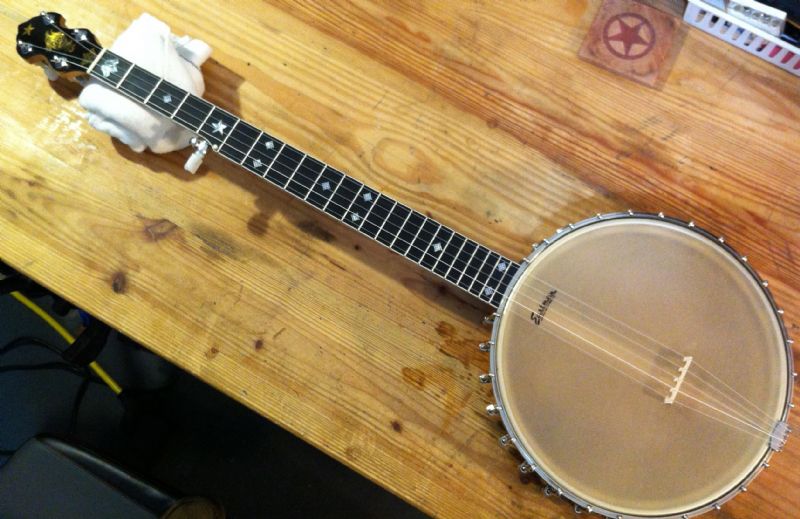 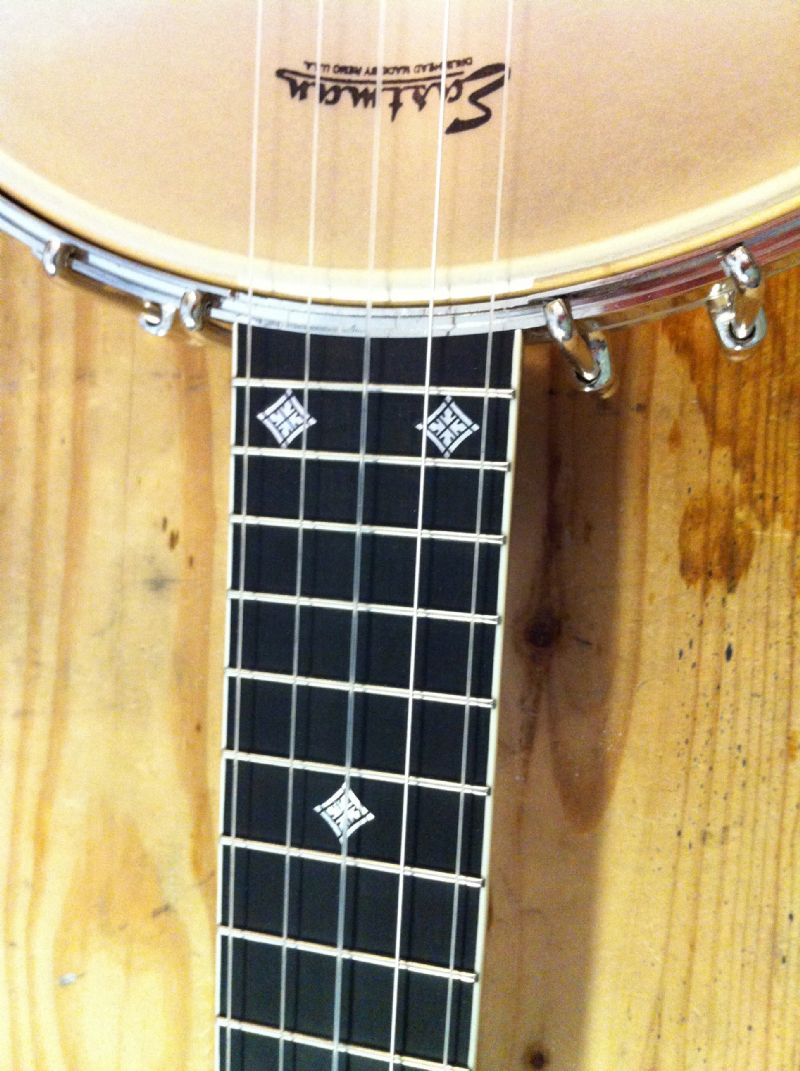 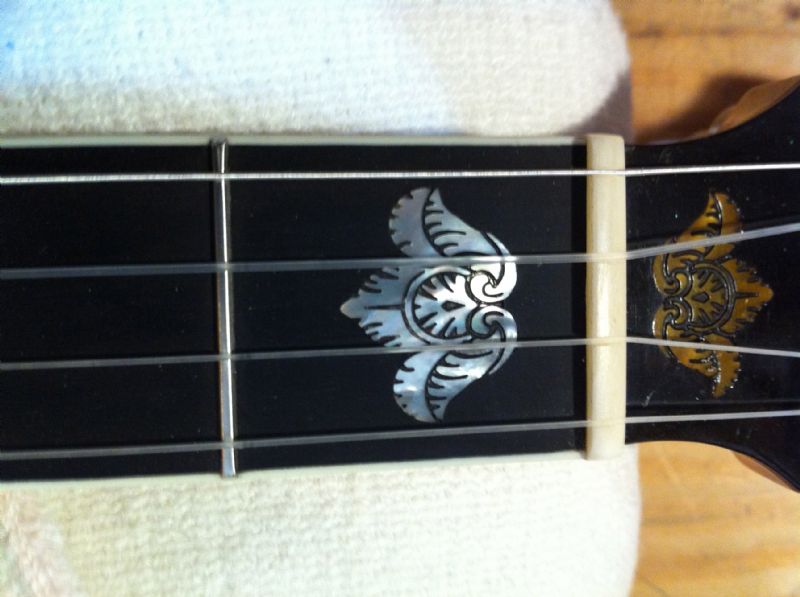 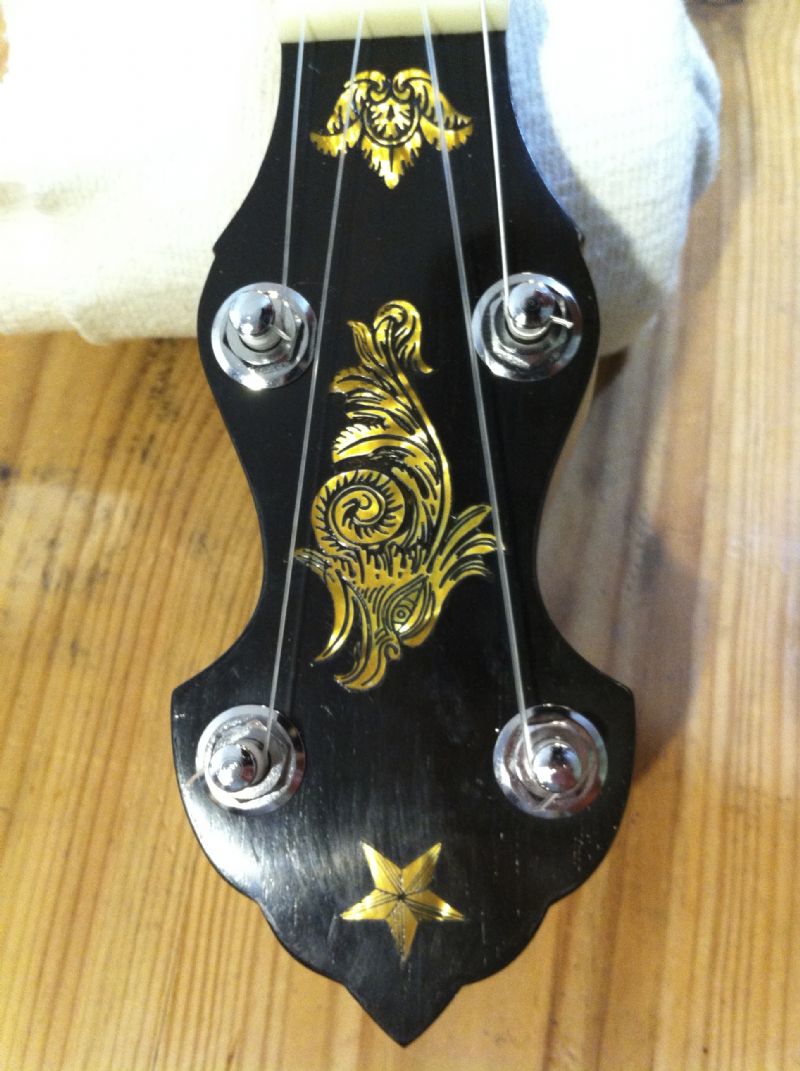 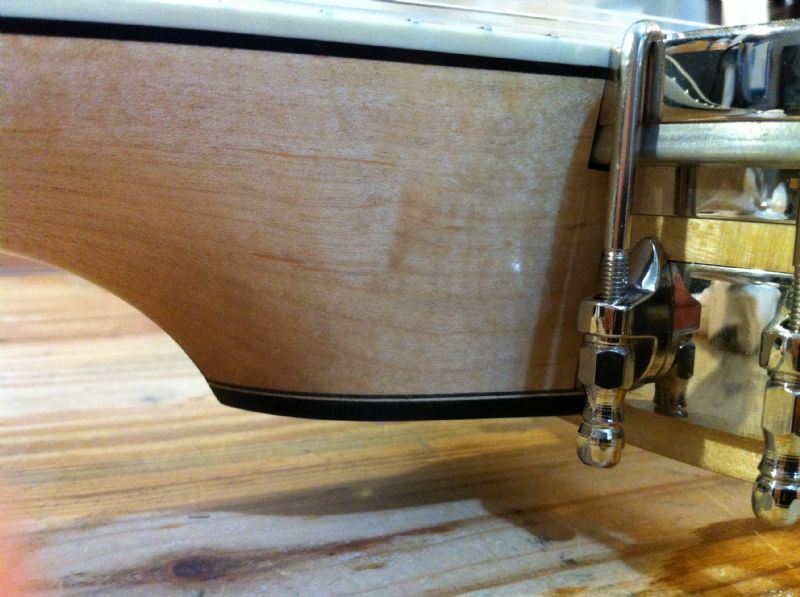 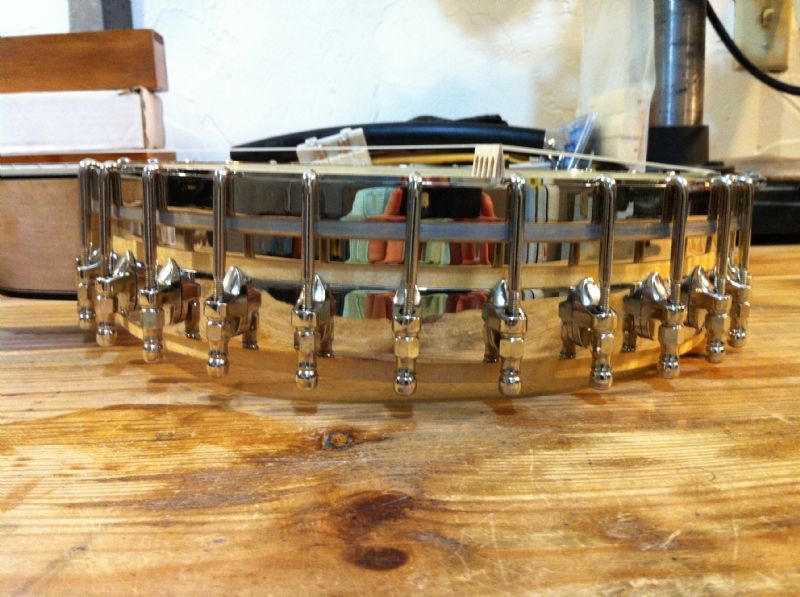 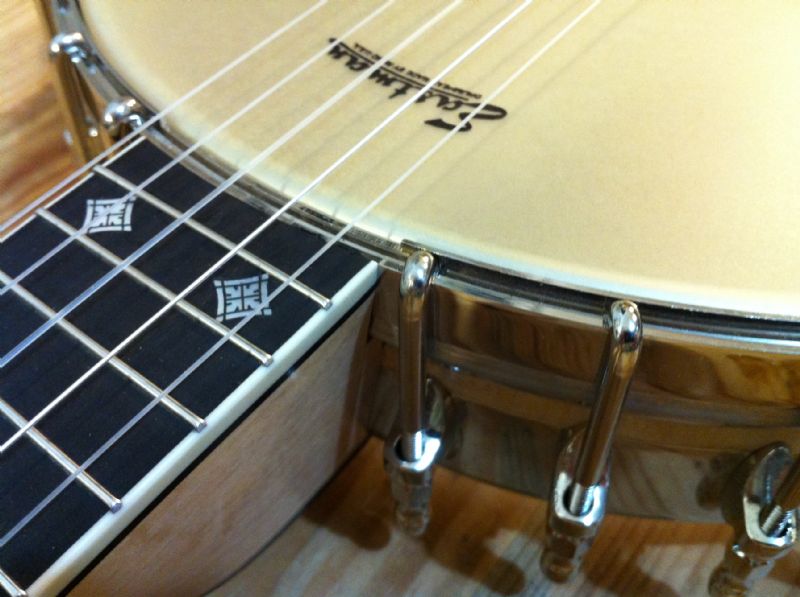 String position is an optical illusion. 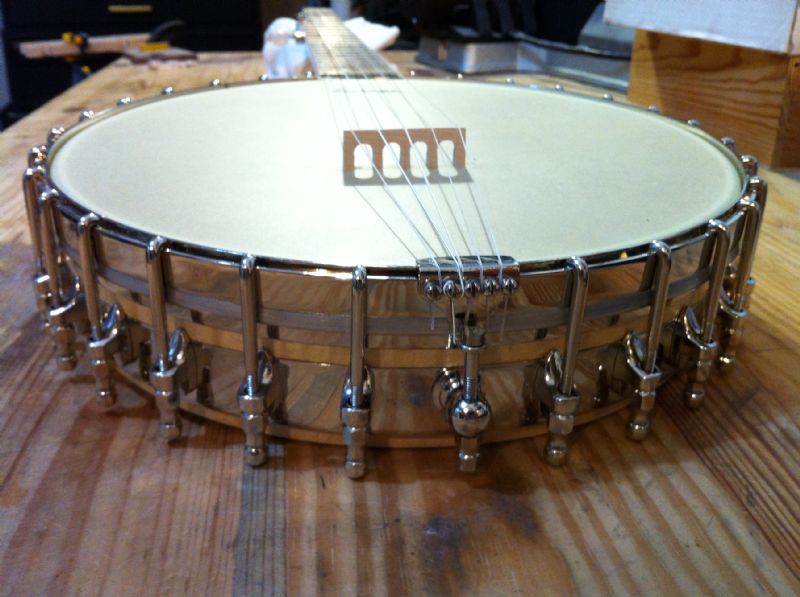 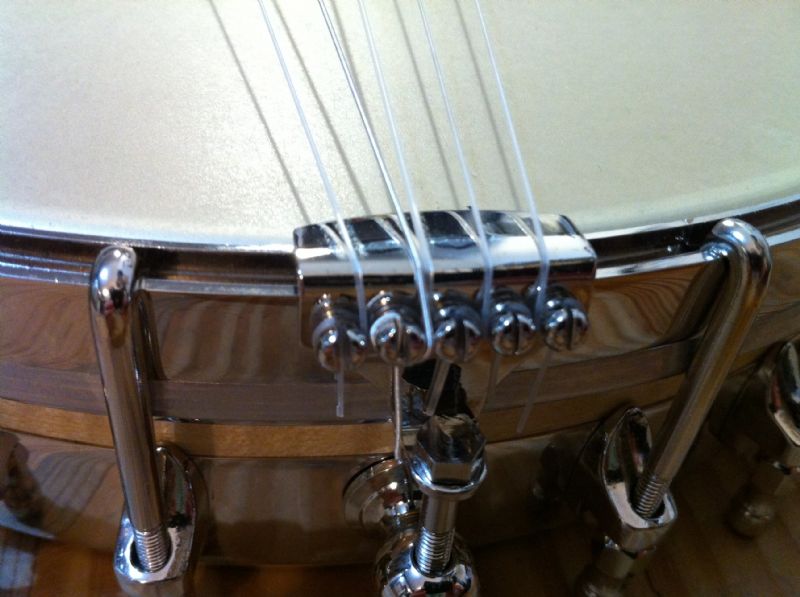 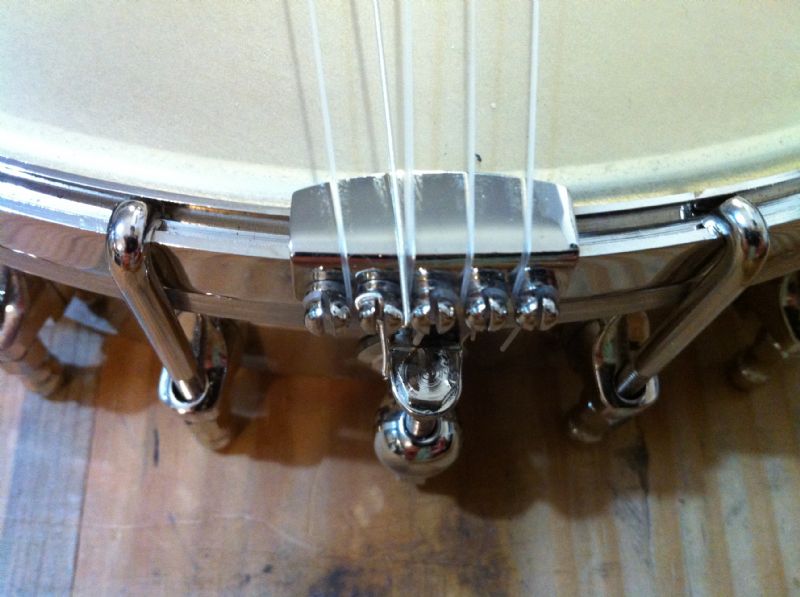 Another photo showing the tailpiece.  This is an important example of how they got this banjo right. 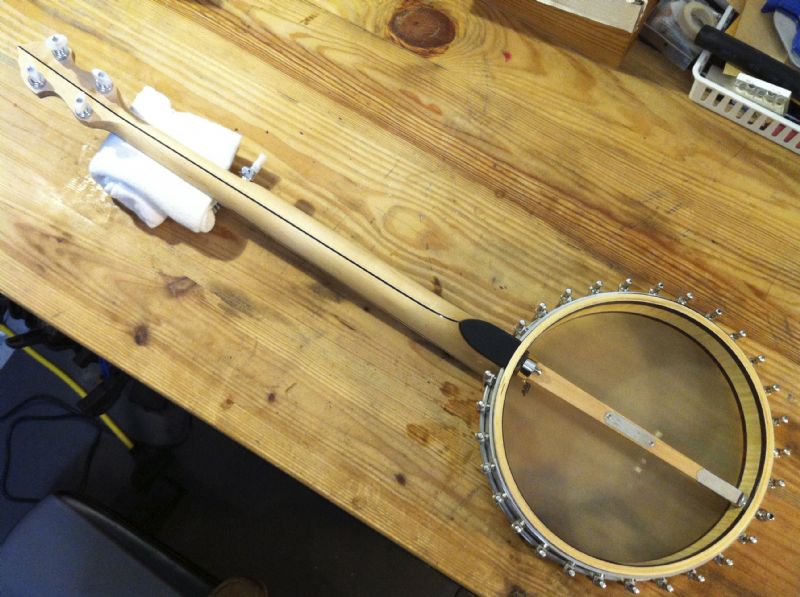 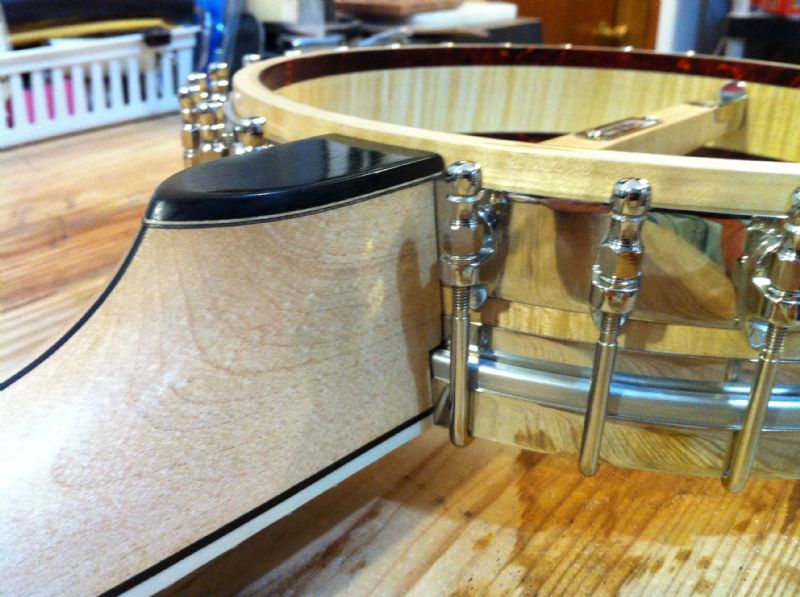 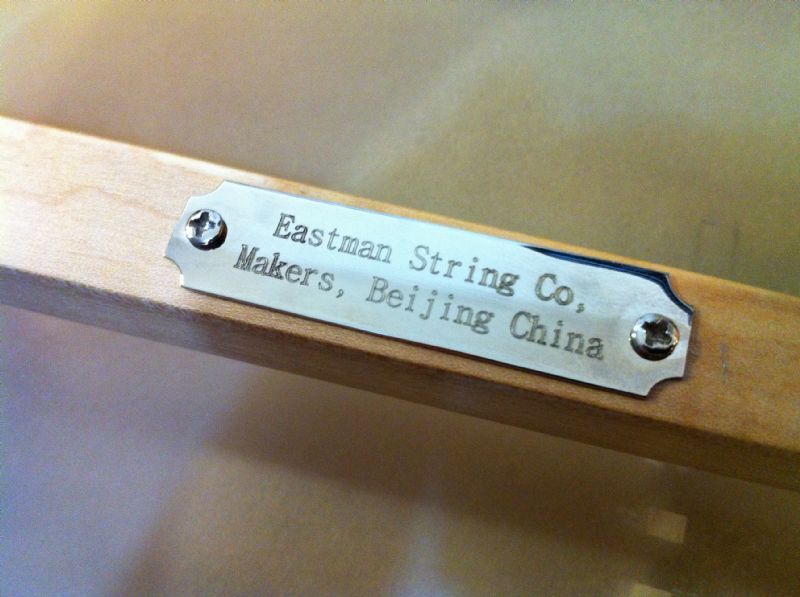 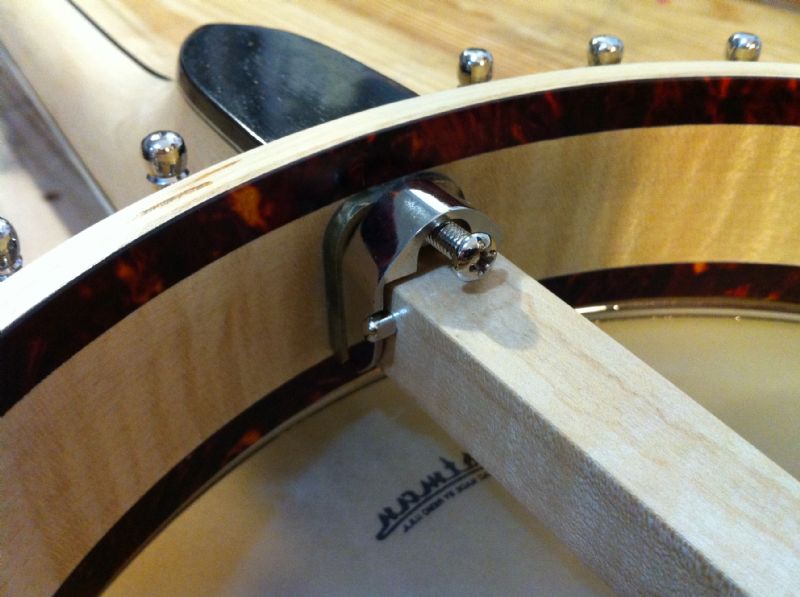 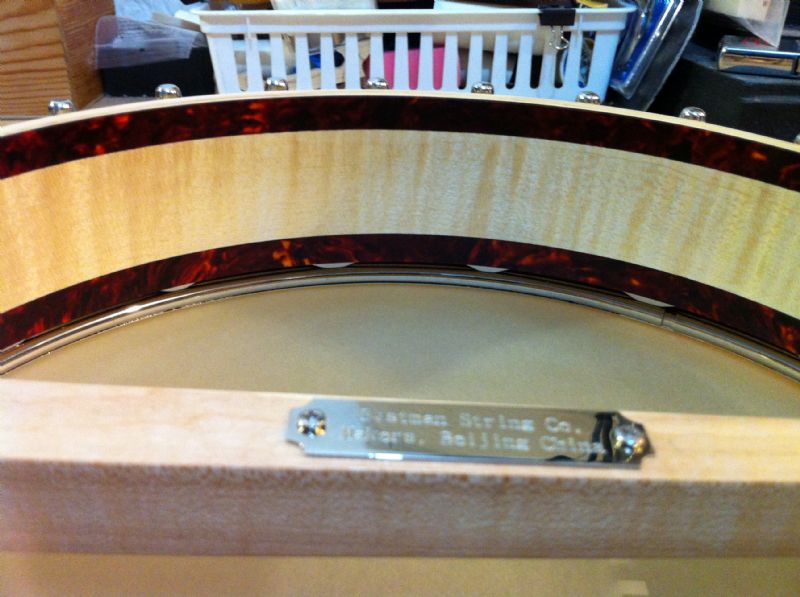 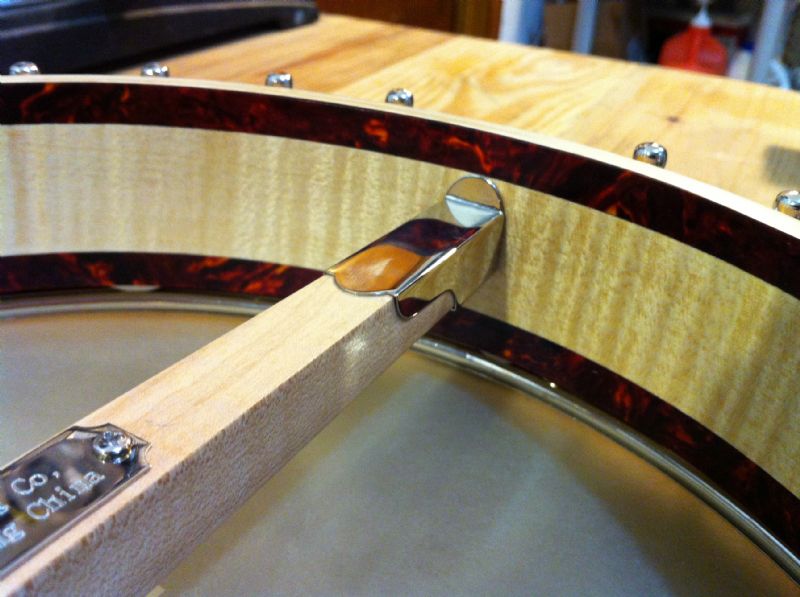 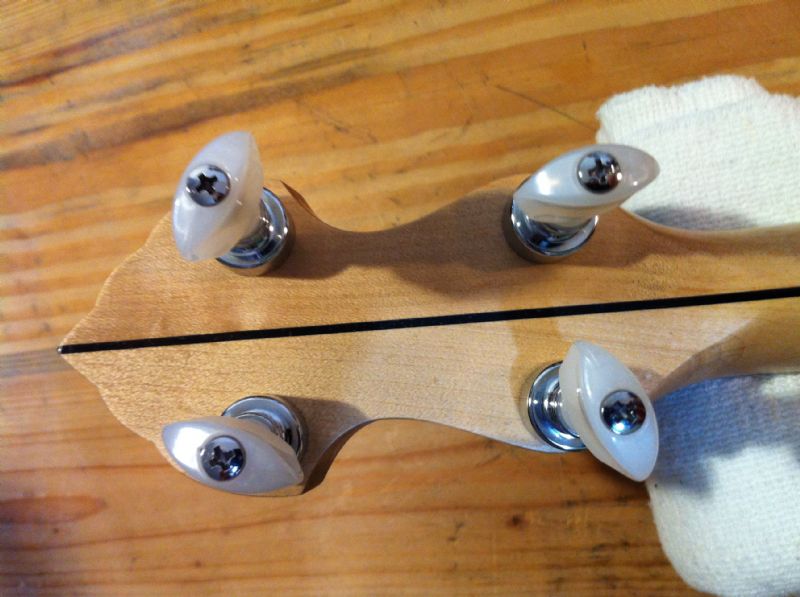 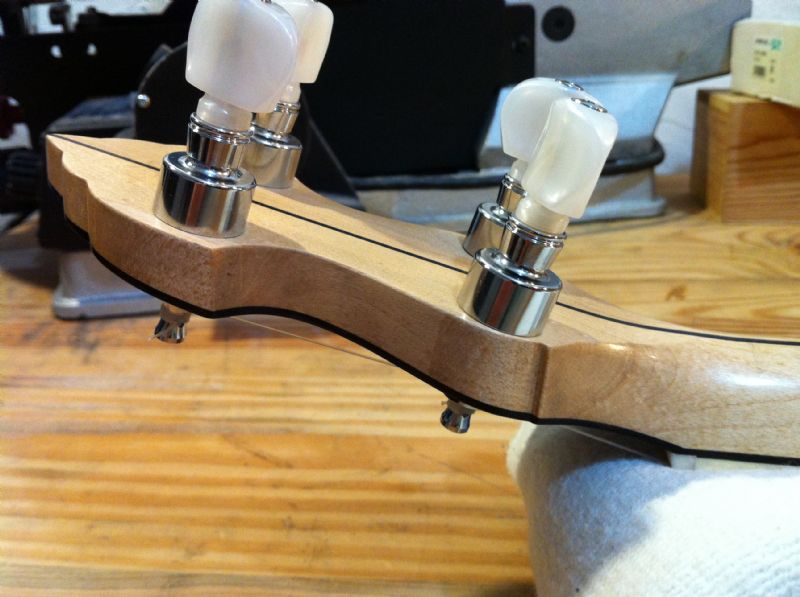 Not a fan of the tuner buttons, but that could just be me.  The peghead has the proper taper, per the originals, going from the base to the tip. 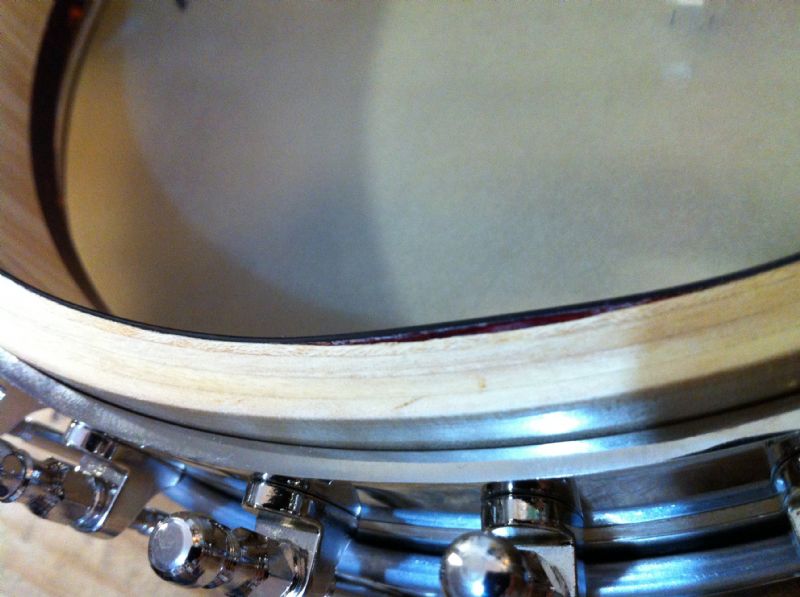 This is where the binding is loose.  Not a deal killer, but a quality issue nonetheless. 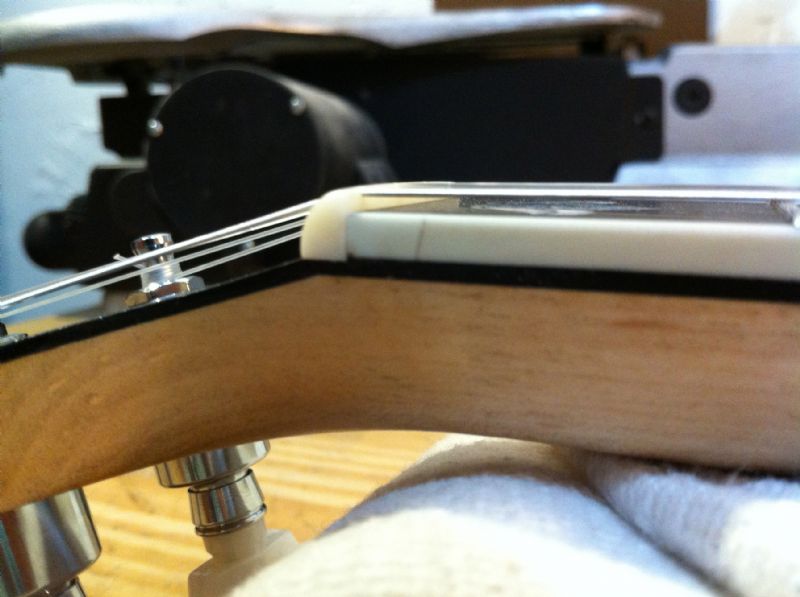 This is where the piece of binding was patched in.  It looks solid and I don't really have a problem with it.  I just feel that it should be pointed out. 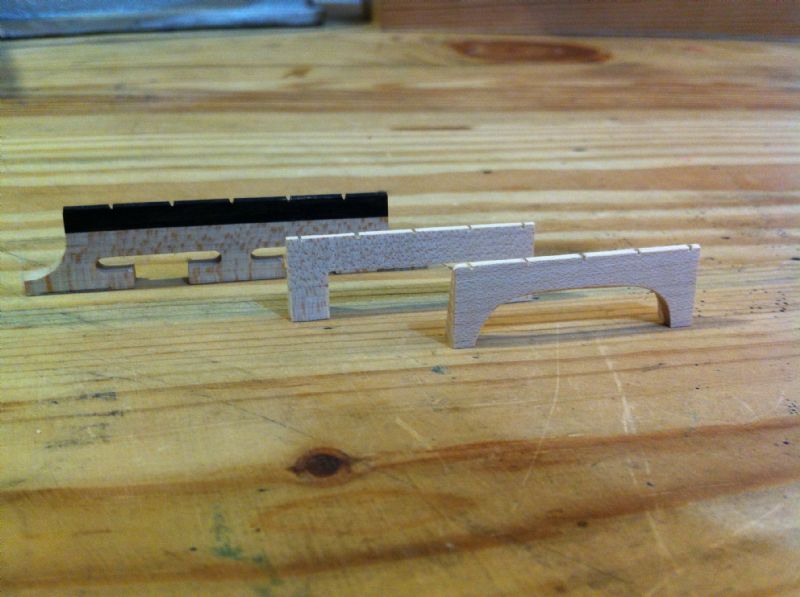 Just for fun, the bridge in the back is the one provided-- completely unsuitable to nylon strings.  The other two are period-correct examples I made, a Stewart patten and a Farland pattern.  Gives size comparison to the modern wire string bridge.