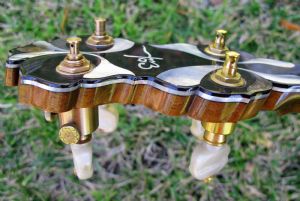 A shell trick never done before or since! The MOP side strips are fully reflective (no dark spots on the curves), and no joints between pieces are easily visible. The secret was in grinding flat MOP blanks that had the reflective layers on the edge of the blanks, rather than on the faces as in normal blanks. Each piece was then broken so that the break followed any natural internal grain curvature, which of course resulted in a blank's edge being totally reflective even though curved. These pieces were then matched to the peghead's curves, and fitted together so that their joints aligned with the exact points and creases of the peghead outline. The MOP was then laminated under the ebony overlay and the peghead shaped to its final contour.

You're a completely obsessed madman, your Pearlness...

'Which epiphone is this?' 7 hrs